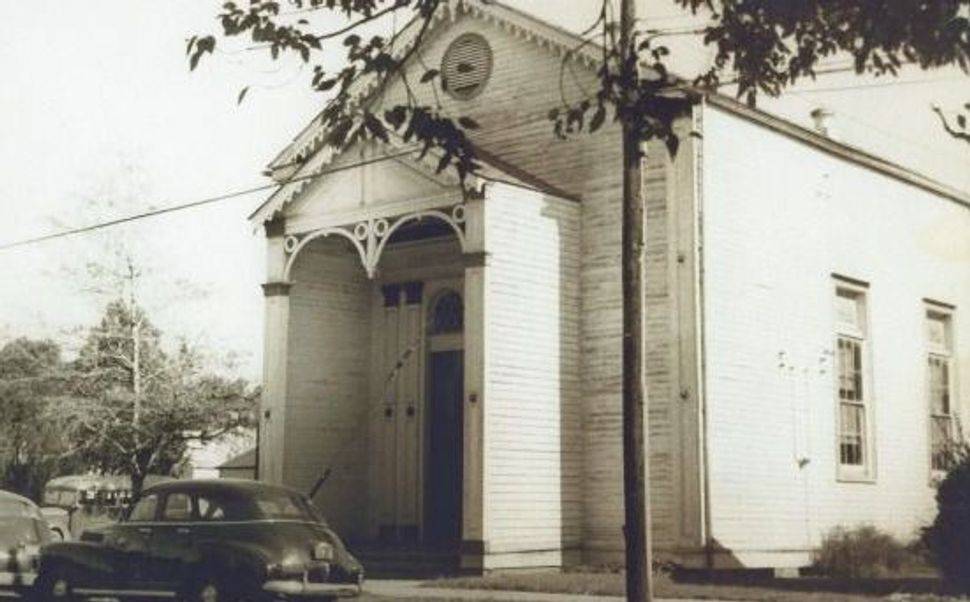 Original: Bikur Cholim in Donaldsonville, La., was once the only shul on the Mississippi River between New Orleans and Baton Rouge. The synagogue closed six decades ago and the last Jew in town died in 2004. Image by Courtesy of Mary Ann Sternberg

There’s no lack of depressing stories about Jews in the news these days — Jared Kushner’s meltdown, Benjamin Netanyahu’s continuing legal woes, the great Oscar snub — but I’ll get to those later. Right now I want to focus on something positive, innovative and, we hope, useful: the launch of the first ever Very Forward Guide to American Synagogues.

This project is unlike anything we’ve done before: a crowd-sourced compilation of data that will serve as a resource to readers nationwide and offer synagogues of all shapes, sizes and denominations a chance to share their story. It’s a project that could only happen now that the Forward’s digital reach and capacity have grown dramatically. And it’s a project that can only happen with your participation.

This has been months in the planning and years in the dreaming. I’ve long wanted our website to serve as a clearinghouse for the basic information about synagogue life across this country, from older, established institutions to newer independent minyanim. Even though many synagogues face challenges and struggles — to maintain buildings, retain congregants, reclaim a spiritual center — others are thriving in unusual venues, reimagining what it means to be a place of prayer, learning and community in the 21st century.

We want to hear all these stories, told directly from the people who are experiencing them. So if you work in a synagogue, or are a lay leader, or just really love the place, take a few minutes to fill out this survey.

We’re talking tachlis here — with questions about synagogue membership, languages spoken in prayer, length of the service, role of women, access for the disabled, the dress code on Shabbat, and so on. We’re not asking you to rate the rabbi’s sermon, but we do want to know whether it’s available online.

These questions were compiled by Forward staff members, led by our lifestyles editor Avital Chizhik-Goldschmidt, who is something of an expert on synagogues since she’s married to a rabbi (and the daughter-in-law of one, too.) We received useful guidance from Dr. Pearl Beck, the veteran surveyor and evaluator of Jewish life. All answers will be verified by the Forward.

Our goal is to publish the guide in late spring/early summer, and continually update it through the year. Highlights will appear in our monthly magazine, too.

As an added incentive, the first 50 respondents will receive a free three-month digital subscription to the Forward (or an extra three months if you are already a subscriber.)

This is a grassroots effort, designed to present an authentic picture of a cornerstone of American Jewish life as a resource to our readers. And if you want to kvell about what makes your synagogue special, there’s room for that, too!

Oy, Jared. I don’t often consider myself prescient, but the column I wrote a year ago detailing the dangers of nepotism in the White House has certainly stood up to time. The latest revelations about Jared Kushner prove the point: Not only is he massively unqualified for his many tasks, but his inability to receive high security clearance and his tangled business interests have crippled what good he could have done.

For an exhaustive summary of the presidential son-in-law’s bad advice, shady deals and overall incompetence, I recommend The New York Times Saturday editorial. And for what this means for the Jews, Peter Beinart’s brilliant analysis, which we published last Friday, says it all.

Oscar so not-Jewish? While it may be true, as our Becky Scott wrote, that Jewish Oscar nominees were snubbed across the board, the 90th awards ceremony did have a lot of Jewy content. In case you missed it all, read this hilarious sweep of a story by our Jenny Singer, who counted 34 — 34! — Jewish moments.

And they’re not all about Gal Gadot.

Looking forward. The Israeli prime minister is set to speak at the annual conference of the American Israel Public Affairs Committee tomorrow, and I’m curious to see what kind of reaction he gets. He caught a great reprieve from his mounting legal problems at home with a cozy meeting at the White House today, but can that carry forth tomorrow before an AIPAC that says it wants to reach out to progressives? Our Nathan Guttman and Batya Ungar-Sargon are roaming the halls and will tell all.