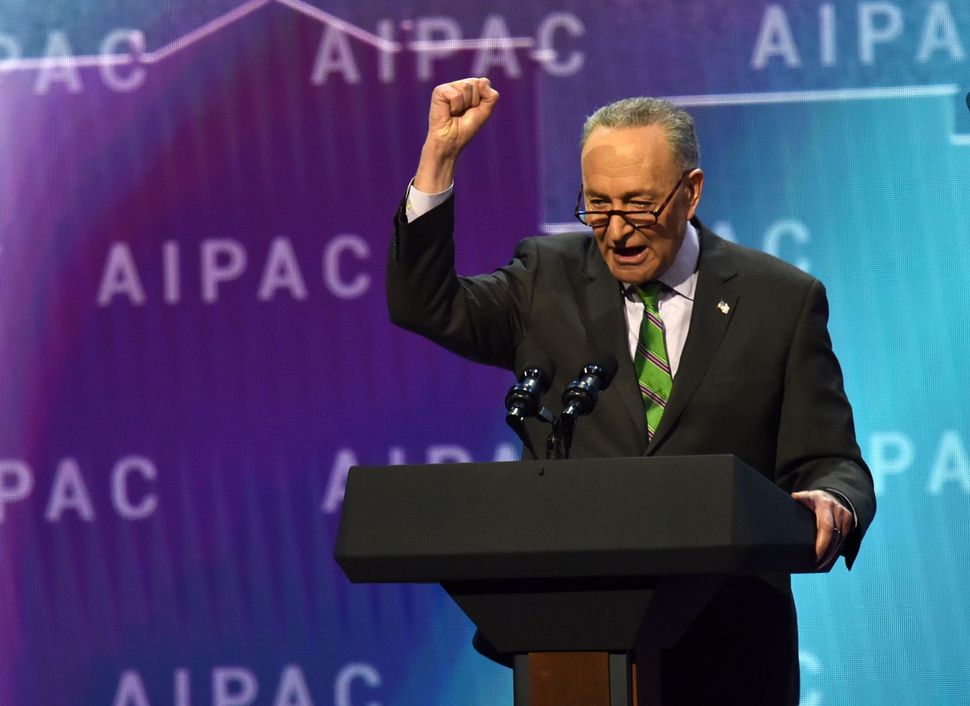 Chuck Schumer is worried about young people. In his speech on Monday at the American Israel Public Affairs Committee policy conference, he warned that “too many of the younger Americans don’t know the history” of the Israeli-Palestinian conflict “and as a result they tend to say, well, both sides are to blame.” And so — after a joke about a Mrs. Goldfarb who is sentenced to one night in jail for each of the four peaches she stole, and whose husband yells to the judge, “She stole a can of peas, too” (relevance: unclear) — the Senate Minority leader offered a history lesson to America’s youth.

He began with the settlements. “There are some who argue, the settlements are the reason there’s not peace,” Schumer declared. “But we all know what happened in Gaza. Israel voluntarily got rid of the settlements there. The soldiers, Israeli soldiers dragged the settlers out of Netzarim and three weeks later the Palestinians threw rockets into Sderot. It’s sure not the settlements that are the blockage to peace.” Take that Israel-queasy millennials.

The implication of Schumer’s tale is that because Palestinians kept fighting Israel even after Israel withdrew its settlements from Gaza, Palestinians don’t really care about settlements. Their real beef is with Israel’s very existence.

But there are problems with this logic. First, in the same year it withdrew its roughly 8,000 settlers from Gaza, Israel increased its settler population overall. In fact, some of the Jewish settlers evacuated from Gaza joined the far-larger settler population in the West Bank. And since the Palestine Liberation Organization’s stated goal was not a Palestinian state in Gaza alone, but a Palestinian state in Gaza and the West Bank, the settlements, from a Palestinian perspective, very much remained a “blockage to peace.”

Schumer’s narrative also ignores the fact that even after Israel withdrew its settlers, it remained Gaza’s occupying power according to both the United Nations and the United States. Even before the 2006 election that Hamas won, Israel controlled entry and exit into Gaza by air, land and sea (in conjunction with Egypt, which controlled the Rafah checkpoint in Gaza’s south). Israel controlled Gaza’s population registry. And it maintained a security barrier inside the Gaza Strip. After Hamas won the 2006 Palestinian legislative elections, Israel and the United States — rather than supporting a coalition government that would have left Mahmoud Abbas as the Palestinian Authority’s president, as Hamas proposed —urged Abbas’s allies to overturn the election results by force.

When that gambit failed, and Hamas solidified its control in Gaza, Israel dramatically restricted the movement of goods and people in and out of the Strip, which wrecked Gaza’s economy. None of this justifies Palestinian rocket fire into Israel. But it gravely undermines Schumer’s claim that, once Israel withdrew its Gaza settlers, it removed any legitimate reason for Palestinian discontent.

Finally, even if Schumer were entirely correct about the events in Gaza, it still wouldn’t prove that settlements are not a “blockage to peace.” In his speech, Schumer declared himself a supporter of the two-state solution. He just believes that the central obstacle to that solution is Palestinian unwillingness to accept Israel’s existence. Let’s assume he’s right, and there’s nothing for Israel to do but wait until the Palestinians stop trying to destroy the Jewish state. Even if that were true, settlement growth would still be a problem since it eats away at the territorial viability of a Palestinian state. Thus, by the time Palestinians come to their senses, settlement growth may have killed the two-state solution that Schumer claims to support.

In his AIPAC speech, Schumer’s other history lesson concerned peace negotiations. “Some say it’s the borders” that are the reason Israel and the Palestinians haven’t made peace, he declared. “Oh Israel wants different borders. But they forget: During the negotiations in 2000 Ehud Barak was making huge territorial concessions that most Israelis didn’t like. It was [Yasser] Arafat who rejected the settlement. It’s not the borders either.”

For a guy who tells others they’re ignorant of history, Schumer is a little rusty himself. At the Camp David summit in the summer of 2000, Barak reportedly (the details are contested because he conveyed his offer verbally, through American interlocutors) offered the Palestinians a state on 91 percent of the West Bank, with one percent of land inside Israel proper as compensation. He also demanded that Israel retain troops in the Jordan Valley — roughly 25 percent of the West Bank — for a dozen years. And he offered the Palestinians a capital in some, but not all, of the Palestinian neighborhoods of East Jerusalem.

For many Israeli Jews, that did indeed constitute “huge territorial concessions.” But from the Palestinian perspective, a nine percent annexation — which would have included the settlement of Ariel, which stretches nearly halfway across the West Bank — would have virtually cut their nascent state in half. Which is why Shlomo Ben Ami, who later became Barak’s foreign minister, declared that, “If I were a Palestinian I would have rejected Camp David as well.”

According to two other Barak advisers, Gilad Sher and Menachem Klein, Arafat offered his own proposal at Camp David. Instead of a nine percent Israeli annexation with a one percent compensation from Israel proper, Arafat proposed an equal 2.5 percent land swap. He also demanded Palestinian sovereignty over all the Palestinian neighborhoods of East Jerusalem as well as the Temple Mount.

Of course, there were other issues that divided the Israeli and Palestinian negotiators at Camp David, and continued to divide them after President Bill Clinton outlined his own parameters for a deal that December. The most important of these was Palestinian refugees. Some Israeli negotiators believed that if Arafat got what he wanted on Jerusalem, he would accept less than a full right of return. But he still wanted Israel to accept many more refugees than Barak would allow.

None of this makes Arafat blameless in the failure of the 2000-2001 negotiations, and the second intifada that followed. But when Schumer tells the kinderlach that borders don’t matter because Barak offered the Palestinians as large a state as they could have possibly wanted, and they still said no, he’s displaying his own ignorance. As yet another former Barak aide, Tal Zilberstein has put it, “There are still people who say, ‘We gave them everything at Camp David and got nothing.’ That is a flagrant lie.”

Because America’s Palestinian population has grown, young Americans are more likely to know people whose families have suffered from Israeli policy. If they take classes on the Israeli-Palestinian conflict, they’re likely to read Israeli “new historians” like Benny Morris and Avi Shlaim who — using archival evidence that was not public when Schumer attended college — challenge traditional Zionist accounts of Israel’s founding. On campus, they’re more likely to actually know students — including Jewish students — who support the boycott, divestment and sanctions movement. And thus, they’re more likely to recognize that it’s a gross simplification to declare, as Schumer did at AIPAC, that BDS is an “anti-Semitic movement.”

The real problem confronting Schumer isn’t that young Americans are ignorant. It’s that more and more of them are knowledgeable enough to realize that Israeli policy in both the West Bank and Gaza massively violates Palestinian human rights. And to wonder why a Democrat like Chuck Schumer is supporting policies so antithetical to the progressive principles he claims to hold dear.