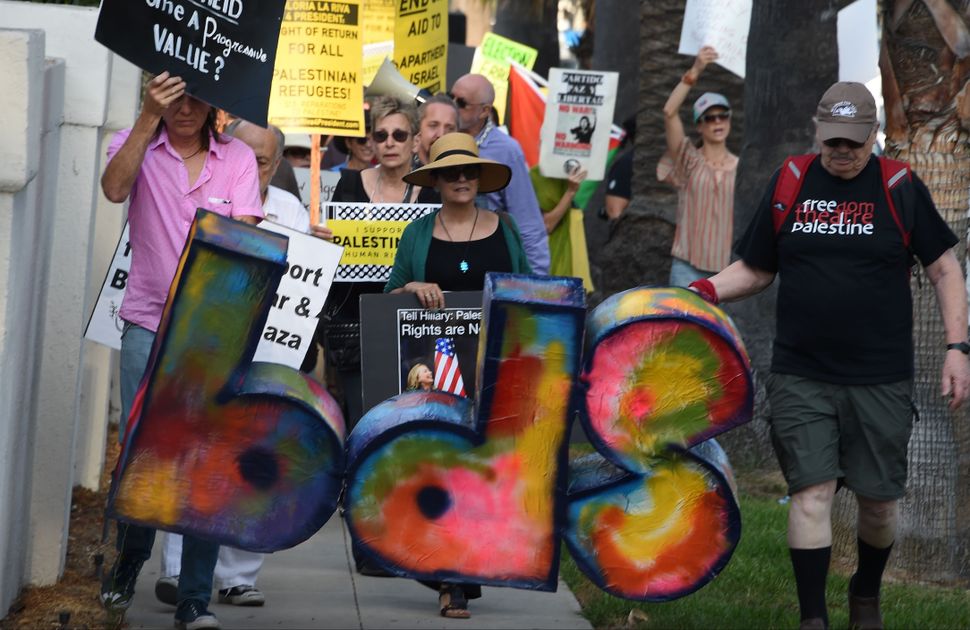 When UC-Berkeley Lecturer Hatem Bazian was invited to speak at Arizona State University by a group of Muslim students, he found something unexpected in his contract: a clause requiring him to certify he wouldn’t boycott Israel.

Bazian was previously best known (depending on who you ask) either for being the founder of Students for Justice in Palestine or for being censured by the Berkeley administration for sharing nakedly antisemitic images on social media. But being blocked from speaking at a public university unless he promised not to boycott Israel gave him a compelling new role: free speech martyr.

It didn’t much matter that the ASU administration quickly recanted, claiming that Bazian had been sent the wrong form and that the “no boycott” provision didn’t apply to speakers invited by student groups. The damage was done, and a sterling example of anti-BDS laws being used to stifle academic freedom was already shooting across social media and becoming the locus of CAIR lawsuit.

This wasn’t the first time that state anti-BDS laws turned into PR nightmares. After Hurricane Harvey, the city of Dickinson, Texas included anti-BDS requirements in its relief grants. The city initially claimed this was required by Texas’ anti-BDS law, though it reversed course following widespread public outrage, including from anti-BDS stalwarts like the ADL. And in Kansas, a public school teacher won a preliminary injunction against an anti-BDS statute that would have forced her to certify she wasn’t boycotting Israel. Once again, embarrassed state officials tried to retroactively back off, claiming that the teacher could have received a waiver.

In the abstract, there are sound arguments for and against anti-BDS laws so long as they are carefully and narrowly tailored to avoid stifling on constitutionally-protected speech. And in all of the cases above, there is at least an argument that the state statutes either were improperly applied or at least did not need to be imposed in the manner that they were.

But the repeated bungles by state officials in implementing the newly enacted state anti-BDS laws indicates a particularly compelling reason why Jewish organizations should think twice before pushing them:

Hence, when high-profile pro-Israel activity is channeled through state bureaucracy, there is a high probability that what the public sees as pro-Israel will become tainted by all the usual sins we associate with state bureaucracy: ineptitude, narrow-minded literalism, pettiness, obstinacy, and vindictiveness.

The core of the problem is this: The Jewish groups pushing these laws care about BDS a lot, including caring about not overreaching and thus giving pro-BDS operatives easy PR victories. But the state officials who will be charged with executing these laws are not particularly invested in the Israeli/Palestinian conflict or the state of the pro- versus anti-BDS fight in America. They will act the way bureaucrats usually act: formulaically applying what they see as state mandates while doing their best to avoid being noticed, scolded, or sued.

Jewish organizations may have carefully mapped out in their minds a precise balance where the state doesn’t subsidize BDS activity, but academic freedom and individual freedom of speech remains uncompromised. But they will almost certainly find that balance blown to pieces once implementation falls into the hands of random county councilors, vice associate deans, and city attorneys.

This all may sound glib. But there’s a more general point to be made here. More and more, Jewish organizations have been outsourcing their pro-Israel advocacy work to non-Jewish actors, particularly Evangelical conservatives—and right-wing partisans. The wager was that these groups would serve as loyal foot-soldiers who would provide activist energy in service of an agenda set by more established pro-Israel organizations. In practice, what we’ve seen is a virtual insurgency where upstart new groups have been more than willing to completely trample fragile political balances and carefully-laid compromises in pursuit of agenda items often deeply unpopular with the bulk of American Jews.

We saw this tension in action last week at the annual American Israel Public Affairs Committee’s annual policy conference. The event began by appealing to progressives, calling it a top priority. But it ended with U.S. Ambassador to Israel David Friedman openly attacking the progressive pro-Israel, pro peace advocates as “blasphemous.” Having previously handed over so much power to polarizing right-wing actors like Friedman, AIPAC finds itself now unable to hold them in check, even as they are becoming openly antagonistic to what had long passed as the pro-Israel consensus.

Anti-BDS laws are part of an ongoing trend where Jewish groups transfer pro-Israel politics and practice into the hands of predominantly non-Jewish actors like state governments. But neither the state legislators who draft these laws nor the local bureaucrats who will enforce them necessarily share the same interests that we do and are not always going to be reliable agents.

Even liberals who loathe BDS might blanche at nakedly interfering with academic freedom at a public university. But it’s highly unlikely that Republican legislators who’ve all but declared war on modern academia will echo their concern. Jewish groups endorsing anti-BDS legislation might envision finely tailored language written so as to avoid any controversy. But that desire won’t always be shared by spotlight-craving lawmakers whose primary interest in the cause is symbolic and so may well be spoiling for a high-profile fight.

At the very least, the moral of the story here is that anti-BDS legislation needs to be written with far more precision than we’ve seen thus far to remove any doubt that it encompasses obvious trouble spots individual purchasing decisions or academic speech, and Jewish groups need to be willing to come out swinging against putatively anti-BDS legislation that isn’t drafted with due care.

But even then, we’d still be leaving the fate of pro-Israel politics in the hands of predominantly non-Jewish, predominantly uninterested governmental functionaries. Even the best-drafted bill may not be able to surmount the creatively destructive interpretation of an apathetic bureaucrat.

If Jewish groups can’t figure out how to surmount that problem, they might be better off looking for anti-BDS strategies that avoid it altogether.

David Schraub is a Lecturer at the University of California, Berkeley Law School and Senior Research Fellow at the California Constitution Center. He blogs regularly at The Debate Link and can be followed on Twitter @schraubd.