A New Lens On My Jewishness, In The Form Of A Genetic Disease 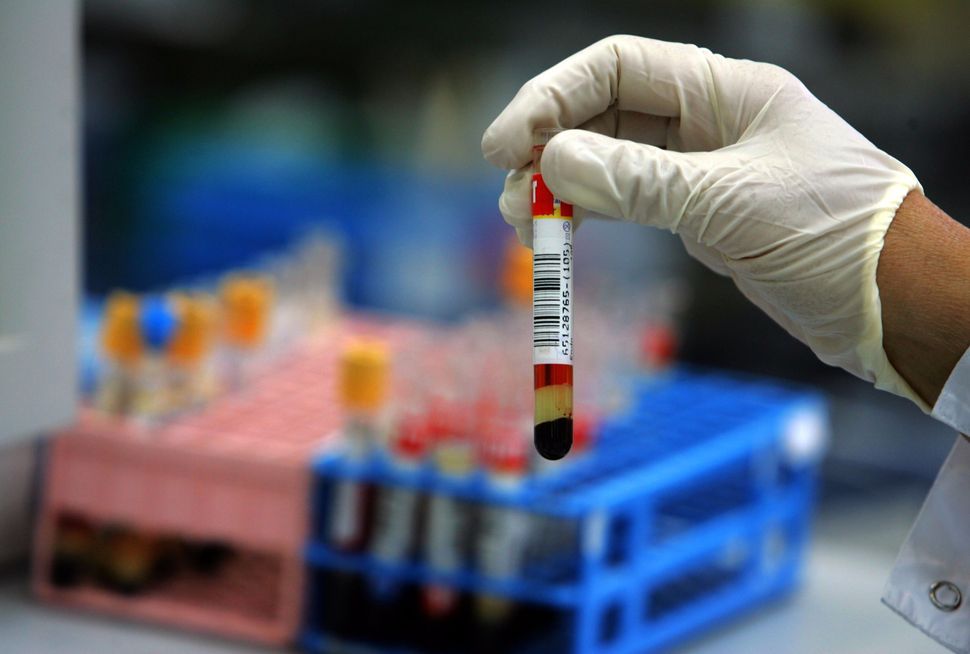 An Israeli blood researcher holds up a vial in a lab. Image by Getty

I begin this newsletter on a personal note. I’ve had a series of blood tests recently and learned a surprising thing about myself: I have a rare genetic bleeding disorder known as Factor XI deficiency.

According to the National Organization for Rare Disorders, Factor XI is a specialized protein essential for proper clotting. People with a Factor XI deficiency don’t necessarily bleed more profusely than others with the right amount of the clotting factor, but they may have difficulty stopping bleeding after surgery, dental work or a traumatic wound. And in today’s world, where clotting factor testing is often ordered before surgery, they may be found to have an abnormal result on one of those tests even though they have never had any bleeding problems.

The disorder shows up unpredictably and inconsistently, and that’s been my experience. I’ve had wisdom teeth extracted, an operation to repair a broken wrist, and delivered three healthy babies, and never had a noticeable bleeding problem. Yet testing now shows that I’ve had this disorder all my life. Fortunately for me, I can tuck away this information and, if a surgeon ever asks about a certain blood test, explain what’s behind it and how to be prepared if I were to bleed more than normal.

But here’s the thing: Factor XI deficiency is much more common in Ashkenazi Jews than in other populations. Learning this has turned my head a bit. Over the years, the Forward has published a great many stories about genetic diseases far more serious and consequential than mine, and I’ve always been grateful that I’ve been spared.

It does feel strange, however, to reach my age and discover something new about yourself and your family. Suddenly, the stories about my uncle, my mother’s youngest brother, bleeding profusely at earlier times in his life may fit a pattern.

And suddenly, I feel intimately part of a tribe. A tribe bonded by blood.

This revelation makes me feel both connected and unsettled. Since most American Jews are Ashkenazi in origin, it shouldn’t surprise me that genetic diseases have been passed down like family heirlooms. But I wonder: will this change with the high rates of intermarriage among the non-Orthodox? Shouldn’t we move beyond tribalism to embrace a more varied concept of the Jewish people, to include those of different races and ethnic origins?

And here’s another thought, gleaned from Eric Goldstein’s 2006 book, “The Price of Whiteness: Jews, Race and American Identity.” He notes that Jews concerned about being classed as undifferentiated whites have little fear of asserting distinctiveness. “By contrast,” he writes, “they have been more reticent in their discussions of another topic related to Jewish tribalism, the study of Jewish genetics. While many Jews see genetic research on their group as a positive effort that will both deliver tangible benefits and bolster feelings of Jewish ‘connectedness,’ many also fear that the endeavor might stigmatize Jews as a deviant genetic population.”

The wonders of modern medicine allow us to learn so much more about who we are, but that knowledge raises additional vexing complications and considerations. All through analyzing a random drop of blood.

What else I’ve been writing. I weighed in on the debate about Poland and its Jews with an essay that I believe took this roiling conversation in a fresh and disturbing direction.

I argue that we should not get trapped in endless debate over whether the Poles were perpetrators in the systemic murder of three million Jews or equal sufferers under the Nazi regime, because both are historically correct. This isn’t a binary choice. In fact, there’s a third category of behavior — the onlooker, the bystander — that all of us need to confront, representing the true lesson of the Holocaust.

The essay has generated lots of comment since it was published online yesterday. To further the conversation, write to me at [email protected]

What else I’ve been reading. Ivanka Trump wants to have it all. This we’ve known for a while. As two new stories show in further detail, the image-conscious, controversial First Daughter wants to be perceived as a hard-working, well-informed White House adviser, while also being first among equals in the president’s feudal family structure, while also continuing to reap financial rewards from her father’s and her own companies.

“Where is Ivanka?” asks The Washington Post, a chatty piece that didn’t reveal much from two sit-down interviews with Trump herself — a telling sign of her Sphinx-like self control. More important was the story from McClatchy’s Washington bureau which details how she is still earning more than a million dollars a year from the Trump Organization in arrangements that raise all sorts of questions about conflict of interest.

Like her father, she hasn’t released her tax returns, so there is no way of knowing the extent of her involvement in the Trumps’ complex network of global operations. Like her husband, she doesn’t appear to have top-level security clearance to perform the tasks she is asked to do on behalf of the American people.

Reading these latest stories, I find myself caught between two opposing reactions. I am outraged at the continued nepotistic behavior of the Trumps, and their blatant refusal to follow ethical norms to guard against corruption in government. At the same time I also am drawn to look at every photo of Ivanka Trump to see what she is wearing.

At first, my reaction embarrassed me, until I realized that it’s all the same. She has no qualifications for a White House job other than her good luck at birth and probably some good intentions. She gets brownie points for being prepared — this point is reiterated in The Post story — when every successful woman knows that she always must be better prepared than the men around her, that no one would ever get away with the impulsive, uninformed and dangerous approach that her father takes to the presidency.

It really is about the clothes, and the image, and the appearance of doing something with little to show for it. Except that, in the meantime, her bank account continues to grow.

Looking forward. Peace plan? What peace plan? The Trump administration’s plan to resolve the Israeli-Palestinian conflict is imminent, or so we are told. I’ll be watching, and I’m sure you will, too.

A New Lens On My Jewishness, In The Form Of A Genetic Disease