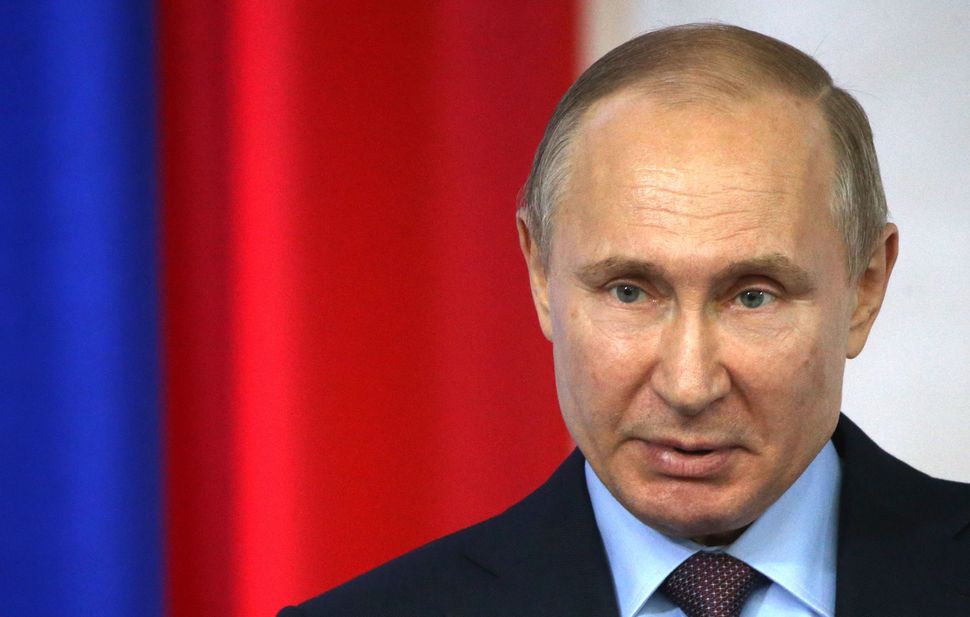 You can see it in American far-righters blaming George Soros for financing their political opponents; in Steve Bannon’s menacing rhetoric about the influence of “globalists;” and, yes, in Louis Farrakhan’s screeds about Jews controlling the FBI. The notion of the Jew as a sinister independent actor, one with unwarranted influence over the march of global events, has always been an effective weapon for those who wish to deflect questions from their own use of power, and present a simpler vision of the world than the messy place that we live in.

Blunt though blaming the Jews may be, its persistence as a stratagem suggests it is more effective than many would like to think. So it’s no surprise to see one of the world’s more malevolent geopolitical actors, Vladimir Putin, propose a vision of the world in which forces still more malevolent pull the strings.

Putin’s recent interview with Megyn Kelly was a master-class in trolling, as David Klion noted in another piece for the Jewish Daily Forward.

This includes its staging; one segment of the interview was conducted in Kaliningrad, a heavily-armed Russian exclave between Poland and Lithuania, although Putin insisted his intent was not to “send a message.”

Furthermore, Kelly’s admirably straightforward questions were answered, throughout, with cynical deflections: after jailing his only serious opponent, Putin addressed the upcoming election by stating, “If voters give me the opportunity to serve another term, I will do it to the best of my ability.” About Paul Manafort, who served Putin’s puppet Ukrainian president, Viktor Yanukovych, Putin said, “It turns out he had connections to Ukraine.”

But among this sea of deflections, one moment stood out: Putin’s novel take on the thirteen Russians indicted for interference in the 2016 U.S. election. When asked repeatedly about them by Kelly, Putin finally said, “Maybe they are not even Russians, but Ukrainians, Tatars or Jews, but with Russian citizenship, which should also be checked. Maybe they have dual citizenship or a Green Card. Maybe, the U.S. paid them for this.”

While it’s true that the term Putin uses for “Russians” here – Russki’ye – does denote ethnic Russians, not citizens of the Russian Federation, it’s clear that Putin is using the oldest dodge in the book: blaming troublesome minorities for his country’s international troubles. The swerve towards blaming ethnic minorities seems to be a novel one in official Russian governmental takes on U.S. election interference, though not a welcome one.

As to the choice of minorities, Putin is currently at war with Ukraine, both in the mainstream Russian press (where the troubles in Ukraine continually function as a sort of Benghazi, crowding out any coverage of domestic unrest) and on the battlefield. Then he mentioned the Tatar ethnic minority in Crimea, which has suffered brutal repressions since Russian annexation, and were vocally opposed to Russia’s land grab. And finally, we get the Jews, who are always convenient to blame, no matter the problem. We are a six-pointed nail to any truth-averse figure bearing the hammer of power.

It’s true as Klion notes that Putin has not been, himself, overtly anti-Semitic in his iron-fisted rule over Russia (which, let us recall, involves frequent political murder; graft on an unprecedented scale; and brutal repression of dissent). And yet, he has frequently cultivated allies who indulge in overt anti-Semitism. These include Viktor Orban in Hungary, whose rise to de facto dictatorship has been accompanied by an increase in the stridency of his far-right rhetoric, and domestic figures like the ultra-nationalist propagandist Alexander Prokhanov, who once wrote a novel in which a Jewish character described a plot to steal blood and organs and sell them in Israel.

While Putin may not, himself, frequently denounce Jews from the presidential pulpit, it’s clear that his approach to anti-Semitism is not unlike his approach to graft: laundered through allies, kept at arm’s length, but a perpetually useful resource.

Putin’s gesture towards traditionally overt anti-Semitism during his Kelly interview should be seen in this context: Anti-Semitism has always been, for him, a means to an end; in this case, it’s the end of sowing confusion and paranoia in the West.

At the end of the day, anti-Semitism, like any other form of evil, should not be excused simply because it is a means to an end, whether that end is “trolling” the West or consolidating power through allies. We oppose it because it is in and of itself an evil; like racism, it is not a matter of what resides in any one heart, but a matter of actions and words.

Why should Vladimir Putin, who is content to use Jews as a rhetorical foil, and let others flourish who do worse, be any different?