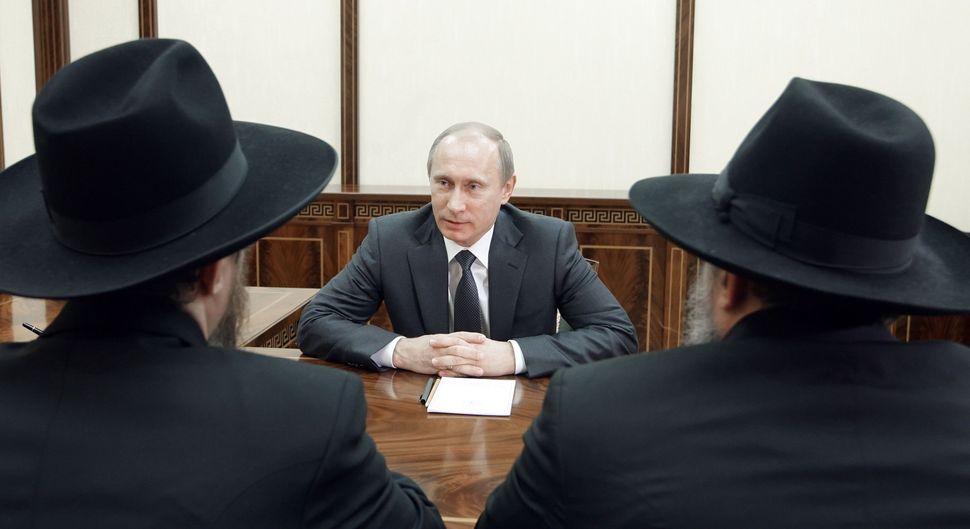 In an interview with NBC’s Megyn Kelly in Moscow that aired on March 9, Russian President Vladimir Putin was asked about the 13 Russian nationals indicted by special counsel Robert Mueller for interfering in the 2016 U.S. presidential election with a covert social media campaign.

Through a translator, Putin responded:

“Maybe they’re not even Russians. Maybe they’re Ukrainians, Tatars, Jews, just with Russian citizenship. Even that needs to be checked. Maybe they have dual citizenship. Or maybe a green card. Maybe it was the Americans who paid them for this work. How do you know? I don’t know.”

The reaction from U.S. and Israeli media outlets was immediate and angry, with headlines focusing on one word: Jews.

Slate went with “Putin: Maybe It Was the Jews Who Meddled in U.S. Presidential Election,” New York magazine with “Putin Says Jews Might Be To Blame for 2016 Election Hacking,” and The Jerusalem Post with “Putin: Jews might have been behind U.S. election interference,” as a representative sample.

The American Jewish Committee called Putin’s remarks “eerily reminiscent of the Protocols of the Elders of Zion,” a parallel also drawn by the head of the Anti-Defamation League. Democratic lawmakers also condemned the remarks, including Sen. Richard Blumenthal of Connecticut, who tweeted, “Repulsive Putin remark deserves to be denounced, soundly and promptly, by world leaders. Why is Trump silent? Intolerance is intolerable.”

This reaction, while understandable, fundamentally misrepresents both what Putin said and the cultural context in which he said it.

This is not to defend Putin for his smug and condescending tone throughout the interview, his palpably dishonest statements regarding whether the Russian government meddled in the 2016 election, or his unhelpful injection of ethnicity into the debate. Nonetheless, it’s important to be accurate about what Putin most likely meant and whether it represents a deeper animus toward Jews. Anti-Semitism in Russia is a real problem, but the panicked responses to Putin’s offhand comments miss the mark.

To some extent, this was a problem of translation. There are two words for “Russian” in Russian: rossiiskii, referring to any citizen of the Russian Federation, and russkii, which refers to a specific “nationality” (in the former Soviet Union, this means something closer to “ethnicity”), ethnic Russians, who comprise 77.7% of the total population, according to the 2010 census.

In total, there are more than 200 nationalities in Russia that have been officially recognized since the Soviet period. Most of these are quite small in number and many are associated with specific, nominally autonomous republics within Russia, such as Tatarstan, Bashkortostan, and Chechnya. All of them are considered rossiiskii, but only the ethnic Russian majority is considered russkii.

The term Putin used in his conversation with Kelly was russkii, presumably translated to him via headset, which accounts for why he might have differentiated between ethnic Russians and other ethnic groups within Russia.

But why did he single out Ukrainians, Tatars and Jews, in that order? Most likely, because Tatars make up the second largest ethnicity after Russians (3.7% of the population) and Ukrainians the third largest (1.4%).

As for Jews… it’s complicated.

Under czarist rule, the Russian state was de jure anti-Semitic, with the Orthodox Church used to justify the confinement of Jews to the Pale of Settlement and the infamous pogroms. But when the Bolsheviks — many of whom, such as Leon Trotsky, were of Jewish background — seized power in 1917, they passed laws banning anti-Semitism, permitted mass migration of Jews into major cities like Moscow and Leningrad, and legally recognized Jews as a nationality with equal rights as citizens.

The official term they (and Putin) used, yevrei, means “Hebrew” and is the standard, inoffensive word for Jew in Russian. It denotes an ethnicity, not a religion, which would be iudei (“Judaic”), a useful distinction not easily captured in English. Despite achieving formal equality, Jews still endured prejudice and, like all other ethnic groups, the suppression of their religion throughout the Soviet period. Many sought to emigrate.

After the Soviet Union broke up in 1991, many Jews left for Israel, the United States, Europe and elsewhere, and the Jews who remained were further subdivided among 15 newly independent republics, with by far the largest number in Russia.

In 1997, Russia announced it would no longer recognize nationality on internal passports. The infamous “fifth paragraph” that had designated every citizen’s nationality, including “Jew”, was removed. In the same year, Russia officially recognized four religions: Orthodox Christianity, Judaism, Islam, and Buddhism, though it’s important to note that many ethnic Jews in post-Soviet Russia are nonreligious. As a result, since 1997, Jews can and do live in Russia without being legally identified as Jews either by nationality or religion. This makes it hard to estimate how many Jews live in Russia today, but the answer is likely in the hundreds of thousands and includes a significant number of prominent people in business, politics, and the arts. And quite a few are close with Vladimir Putin.

Putin, who has effectively ruled Russia since 2000, is not known for anti-Semitism. At various points, he has instrumentalized xenophobia against ethnic minorities, in particular from the Caucasus, as well as homophobia, and he is notoriously politically incorrect in his public statements. Still, he has never targeted Jews.

On the contrary, Putin counts many Jews among his circle of wealthy friends, has a warm relationship with the controversial Chabad Lubavitch Rabbi Berel Lazar, and gets along famously with Israeli officials like Foreign Minister Avigdor Lieberman. He has always spoken of Jews in positive terms, and as his respected biographers Fiona Hill and Clifford Gady have noted, he has had close relationships with Jews dating back to his early childhood in Leningrad.

None of this means that Putin is entirely innocent when it comes to anti-Semitism, which is still widespread in Russia. In the process of consolidating his power, he did target a number of oligarchs with known Jewish ancestry, such as Mikhail Khodorkovsky and Boris Berezovsky, but he did not single them out for Jewishness, and many other ethnically Jewish oligarchs, such as Roman Abramovich and Viktor Vekselberg, have thrived under Putin.

Putin has also overseen covert support for far-right anti-Semitic political parties in various countries — including, one could argue, the United States. But this should be understood as a strategy for destabilizing those countries and not as serving an ideologically anti-Semitic agenda.

He has meanwhile consistently pursued closer relations with Israel and has made many warm gestures to the Russian Jewish community.

Putin’s remarks to Kelly were awkward at the very least. But they should be understood as dissembling or trolling, which, unlike anti-Semitism, the Russian president is well known for.

He was being insincere and deliberately dense, refusing to engage on the question of whether the Kremlin is responsible for the Internet Research Agency’s alleged cyberattacks against the United States. Raising the possibility that the perpetrators might be ethnically Jewish or Tatar or Ukrainian rather than Russian is immaterial to the question of whether they had Kremlin support, which is exactly why Putin said it — to demonstrate how little interest he had in answering Kelly’s questions seriously.

But he did not single out Jews, and unless this is the start of a disturbing new trend, there is no evidence that he intended to dog whistle to anti-Semites.

There are many good reasons to be concerned about Putin, but his feelings toward Jews are most likely not among them.

David Klion is a writer and editor in Brooklyn whose work has appeared in The New York Times, the Guardian, Jewish Currents and other publications. Follow him on Twitter, @DavidKlion.