Shame On The Jewish Schools That Skipped The Walkout 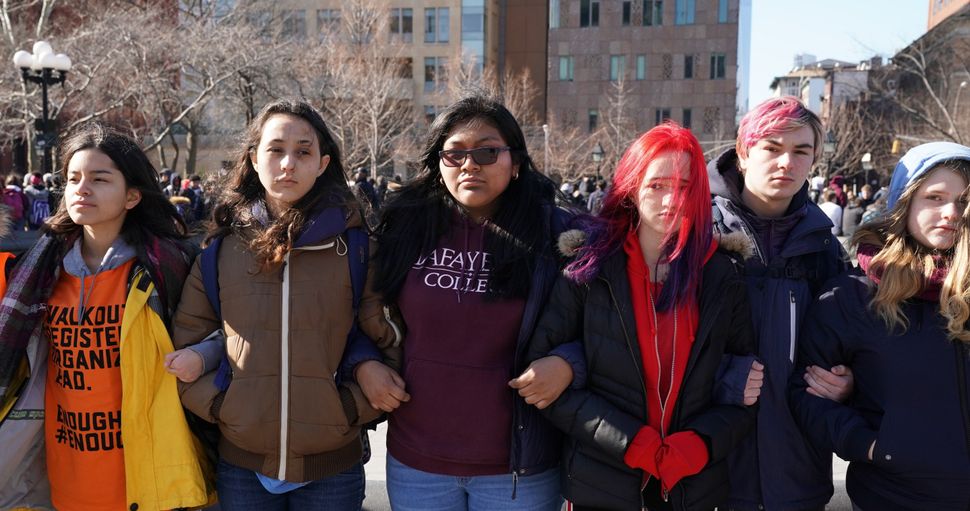 On Wednesday, thousands of students nationwide walked out in protest of gun violence. I was one of them, along with some of my classmates from the Heschel School. We proudly joined in the national movement, bringing our Jewishness to our activism as so many have before us.

But not all Jewish schools joined the walkout. SAR, an Orthodox Jewish day school, canceled their walk-out. They did so because it was organized by Women’s March Youth Empower, and in light of Women’s March Organizer Tamika Mallory’s connection to the anti-Semitic Nation of Islam leader Louis Farrakhan, SAR opted out of the national walkout. Instead, they will have their own walkout on Thursday.

To some, this seems like the best of both worlds. SAR students can simultaneously protest school shootings and anti-Semitism. But by rescheduling their walk-out, SAR removed itself from the national conversation. Sure, they may be chanting the same anti-gun slogans and holding the same posters. But by distancing themselves from the official protest, SAR made clear that anti-Semitism is more important to them than gun-violence.

In other words, “Judaism First.”

This is not to say that I support Mallory’s connection with Farrakhan. I do not seek to minimize the significance of anti-Semitism in any way. Anti-Semitism is real and ugly and deadly.

And so are guns.

These two causes are not mutually-exclusive, and in foregrounding anti-Semitism in a conversation about guns, SAR presented its students with a choice: Fight against guns or stand up for Jews.

It was an unfortunate ultimatum, especially at a time when so many Jews are fighting to be part of liberal circles. But the struggle comes from within the Jewish community, too. Sadly, SAR’s withdrawal from the march is the rule, not the exception. Whether it be views on Israel or intermarriage, there are too many prerequisites to social activism within the Jewish community.

In fact, by separating ourselves from the national conversation, Jews reinforce the very segregation that anti-Semites want.

We should be bringing our Judaism to our activism, rather than rejecting our activism because of our Judaism. This is especially true in the fight for better gun control, which affects all of our lives but especially the lives of children going to school.

She was right, of course, though at first, I brushed her feelings aside. But after seeing the shoe memorial on the White House lawn yesterday, I, too, found myself disturbed as the similarity concretized for me.

Is it okay to compare this modern phenomenon to that which I was told is incomparable? Is it ever justified to compare suffering? I asked myself these questions hesitantly, afraid that I, too, would come to feel conflicted about a cause I unequivocally supported.

I then learned that it was the students at Marjory Stoneman Douglas themselves who had survived the mass shooting who began using the slogan. This was not a tactical or seditious attempt to co-opt a Jewish phrase for a political cause. Instead, somewhere in the subconscious of MSD students, many of whom are Jewish, was an instinctual reaction to trauma, inherited from past generations.

These students are using the tools that their predecessors used to keep injustice fresh in American memory. In other words, the MSD students’ calls to action are uniquely Jewish.

Correction: An earlier draft of this piece stated that millions of students walked out. The actual number was in the thousands.

Abigail D.M. Fisher is a 16-year-old junior who lives in Riverdale, New York. She is the current co-editor in chief of her school’s newspaper, an editor of the literary magazine, a captain of the debate team, and a member of Girls Write Now.

Shame On The Jewish Schools That Skipped The Walkout