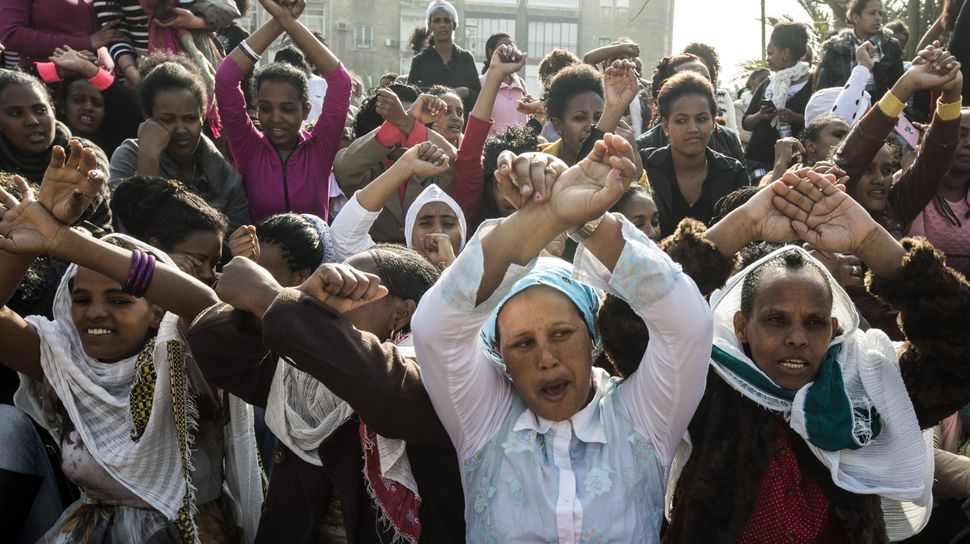 On Thursday, JTA reported that five prominent pro-Israel Americans, including Abraham Foxman and Alan Dershowitz, wrote a letter to Prime Minister Benjamin Netanyahu warning of “incalculable damage” to Israel’s reputation if he insists on implementing a plan to deport 40,000 African refugees, mostly from Sudan and Eritrea.

“We, a group of ardent Zionists, who have devoted our lives to defending the good name of the state of Israel and the Jewish people, write with urgent concern about the situation of the African asylum seekers,” they wrote.

The letter was part of a larger movement in recent months, wherein mainstream Jewish groups in the United States have finally begun to issue statements of solidarity with the African asylum-seeker community, joining veteran Israeli activists who have long called upon the Netanyahu government to fairly evaluate their refugee requests and grant the vast majority of them full residency rights, in keeping with international standards.

While these statements of solidarity are welcome, they come far too late. The organized American Jewish community stayed silent for the last five years as the Israeli government rounded up thousands of African refugees into desert detention centers, and then out of the country altogether. Netanyahu’s government has already evicted over a third of the refugee community.

The problem hinges on whether the African migrants are refugees, as they and their advocates claim, or whether they are migrant workers, as the government posits, even calling them “infiltrators.”

It’s the government’s narrative that has prevailed by and large. As president of the Hebrew Immigrant Aid Society Mark Hetfield explained in Haaretz, “The narrative that the prime minister kept spitting out — that these were illegal work migrants, not asylum seekers — became the prevailing narrative.” Hetfield nevertheless believes that change is on the way. “Israelis are beginning to realize these are people with asylum claims, and they should be given a fair asylum hearing,” he told Haaretz.

But nothing could be further from the truth. Sadly, the vast majority of Israeli citizens continue to support Netanyahu’s efforts to force all African refugees out of the country. An Israel Democracy Institute poll in January revealed that a full two-thirds of Israeli citizens support the planned expulsion. Support for the expulsion is higher among Israeli Jews than among Palestinian citizens of Israel by almost twenty percent.

And the trend is rising, not falling. The last time Israeli Jews were polled on the issue, exactly four years ago, 61% of them supported deporting all the Africans immediately. Last month’s poll revealed that 69% of Israeli Jews support such a plan today.

It’s not just Africans, either. Nearly half of Israeli Jews want to see the country fully cleansed of Arabs, with one-in-five Jewish adults who strongly agree that this would be best.

These numbers underscore an important aspect of this whole awful episode: that anti-refugee racism in Israel is far, far worse than the picture painted by Zionists.

Just a few weeks ago, an Israeli court convicted two Israelis of brutally beating African refugee Babikir Ali Adham-Abdo to death, right outside of the city hall of Petach Tikvah, a suburb of Tel Aviv. The Jewish teens kicked Adham-Abdo in the head for an hour and a half, until his face was utterly unrecognizable.

The episode brought to mind the beating and lynching of an African American teenager in 1955 — Emmett Till. For like in Emmett Till’s case, Adham-Abdo’s killers claimed he brought on his own beating, because he had supposedly sexually harassed a group of white Jewish girls.

The city hall’s CCTV footage proved that no such harassment had ever even occurred. But those teens knew that. They used the harassment as an excuse most Israeli Jews would buy, who remain mortified by miscegenation. Adham-Abdo was not even the first non-Jewish African refugee beaten to death in a public place by an Israeli mob.

But this was not the only horrific Israeli attack on Africans in recent years, and the threat to the refugees comes not only from vigilante violence. Israel currently has the highest refugee rejection rate in the world, with plans currently underway to deport tens of thousands of African refugees from the country.

Netanyahu’s immigration officials will soon be hunting black men down in the streets of Tel Aviv and forcing them onto planes that will ferry them to a renewed stateless existence, one that will imperil them as reports have shown to rape, torture, slavery and death.

The bulk of our efforts to stop these deportations must focus not on the symptom — anti-refugee sentiment — but rather on its root cause: widespread racism in Israeli society.

So while Israel’s defenders may be uncomfortable with the actual reality of Israeli racism, it would behoove them to refrain from policing the discourse and punching to the left. They might manage to shame radical activists out of invoking the name of Anne Frank to describe their efforts to hide the African refugees in their homes. But they will find Frank’s name replaced by other, equally iconic victims of racist violence, names like Emmett Till.

Any movement that really aims to end Israel’s war on African refugees and the vigilante violence it incites must admit the true extent of Israeli racism.

In their letter last week, the Jewish leaders wrote that “a mass expulsion could cause incalculable damage to the moral standing of Israel and of Jews around the world.”

Indeed, deporting 40,000 black people from your country is sure to do some reputational damage. But it’s not the PR problem that should irk Jews who care about Israel. It’s the human rights problem, and the racism that causes it.

David Sheen is an independent journalist and filmmaker. Sheen’s website is www.davidsheen.com and he tweets from @davidsheen.