If You Think Jews Don’t ‘Stand Against Hate,’ You’re Not Talking To Jewish Women 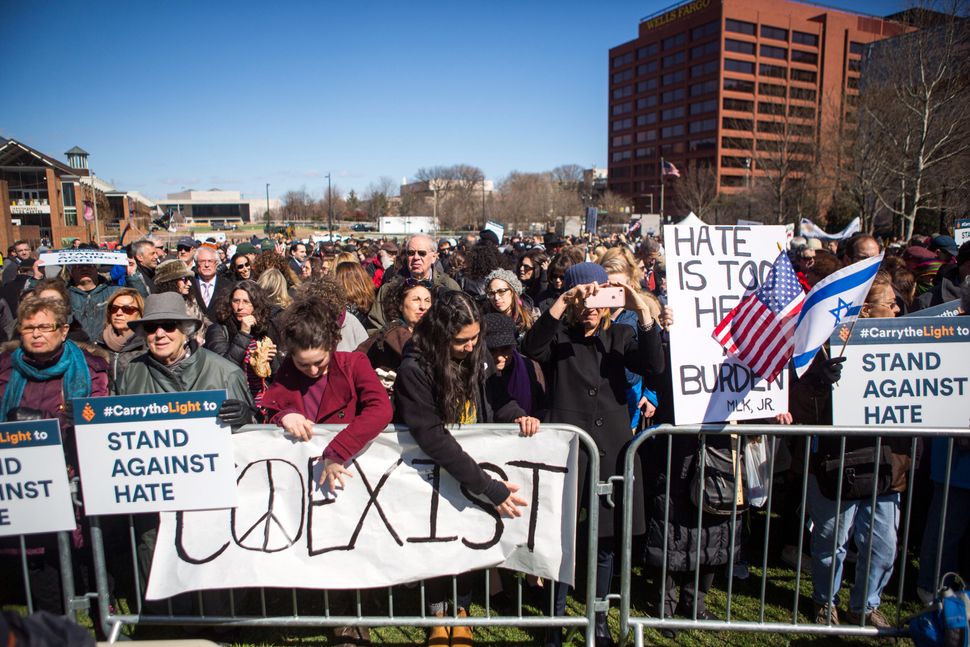 Stand Against Hate rally in Philadelphia. Image by Getty

Jonathan Weisman, the deputy Washington editor of the New York Times, has just published a book about the rise of anti-Semitism in America, and he may be coming to a venue near you on his coast-to-coast book tour. In “(((Semitism))): Being Jewish in America in the Age of Trump,” Weisman provides a readable, timely account of how the “alt-right” hijacked social media to target, harass and threaten Jewish journalists like himself, and to spread a larger message of hate throughout Trump’s America.

To the uninitiated, it’s a shocking read, which is why Weisman’s careful cataloguing of this toxic culture is important.

But Weisman doesn’t stop there. He finds the American Jewish response to this ascendant hatred weak, polarized and not grounded in morality. As he demanded in a Times opinion piece last week, why are American Jews — and especially their leaders — so quiet? Why aren’t they speaking up?

I spent a great deal of time reading and thinking about Weisman’s book to review it for The Washington Post, and while I commend much of his work, I was disappointed in his final critique. Many of us have spoken up. And continue to do so. Unfortunately, Weisman — and others like him — either didn’t hear, or weren’t listening.

A good reporter, frankly, should know better. Weisman complains: “If the vinyl banners proclaiming ‘Remember Darfur’ that once graced the front of many American synagogues could give way in a wave to ‘We Stand With Israel,’ why can’t they now give way en masse to ‘We Stand Against Hate’?” Well, they do. Lots of synagogues proclaim their support for Israel and their solidarity with other minorities against hatred and prejudice. Mine does. For many Jews, these are not incompatible beliefs.

But I think there are deeper reasons for this myopia, and one of them relates to gender. As I pointed out in my review, Jewish women only make an appearance in Weisman’s book as victims, not thought leaders and activists. Yet the Jewish social justice world is filled with brilliant, courageous and distinctive women working locally and nationally to highlight and remedy injustice and, yes, anti-Semitism from the right and the left.

These women are, however, too often overlooked by those rushing for a quote from the same men running the same organizations for decades. This stubborn erasure isn’t just a problem of the old guard; plenty of otherwise progressive, well-meaning men like Weisman unwittingly fall into the same, easy trap.

Because I’ve been a working mother for a very long time, I am especially attuned to the ways women are brushed out of the picture, ignored, downplayed, belittled. I can’t help it. I see a program with only men on stage, and I cringe. I read a book citing only men as experts, and I am exasperated.

I do this not to satisfy some abstract quota in my head. I do this because I know that there are plenty of women who could also be on that stage, who have something to say and teach, whose lived experiences matter to the conversation.

In the past, I’ve largely kept this to myself, or grumbled with other women, hesitant to cite yet another example of gender imbalance too loudly. But we’re in a #MeToo moment now, and I feel — to use an overused phrase — empowered to call this out.

So as we debate the rise of anti-Semitism, its causes and consequences, let’s make sure to go first to the women on the front lines of this fight.

What else I’m reading. Another concern I have with Weisman’s book is the way he minimizes the simmering anti-Semitism coming from the far left. Though not as menacing as the hate emanating from the alt-right, it is still something that should not be dismissed. For a devastating look at what can happen when a Labor leader is blind to prejudice, read Anshel Pfeffer’s story in Haaretz on Jeremy Corbyn and British Jews.

Like many of you, I listened to the speeches at the March for our Lives with awe and admiration, as young people pushed past their trauma to offer eloquent testimony of the need for genuine political action to keep them safer at school. Beyond these few, brave examples, however, are many more students who have been scarred by school shootings, and the Washington Post spent a year tracking them down and analyzing the affects of gun violence. The story deepened my understanding of the true consequences of this public health plague.

And if you are looking for inspiration before Passover, read my colleague Adam Langer’s amazing story of a Jewish community which helped to rescue three generations of refugees. Adam’s masterful tale all started with a 1943 story in the Yiddish Forward. Long form journalism at its best.

What’s on your Seder table? Out of pure joy sprinkled with a sliver of masochism, my husband and I always host two large Seders, and this year is no different. Except that it’s the third time kitniyot, those pesky beans, rice and legumes shunned for centuries during the holiday by Ashkenazi Jews, will be in our home.

I am not a strictly halachic Jew, but when the Conservative Movement declared two years ago that kitniyot were kosher for Passover, I finally relented. My husband had wanted to make this change many years ago, claiming that for one week a year, he was actually a Sephardic Jew. Now he didn’t even have to pretend.

As I wrote in this 2016 column in the Forward, I was deeply ambivalent that first year, afraid that I was somehow leaving a significant tradition behind, even though I did not grow up in a ritually observant home. Last year was a little easier.

And this year? I’m relieved, frankly. I have more options, especially for the vegetarians at our table. And as I move away from unnecessary, overpriced foods foisted upon us by what I call the Passover-Industrial-Complex — how did we survive all these centuries without kosher-for-Passover potato chips? — I’m grateful to have a few, more wholesome replacements.

To go along with the brisket, of course.

Looking forward. Despite all the work (or maybe because of it?) Passover remains my favorite holiday of the year. My yours be filled with joy and meaning.

Please do stay in touch by emailing me at [email protected]

If You Think Jews Don’t ‘Stand Against Hate,’ You’re Not Talking To Jewish Women