The Danger Of Progressive Leaders Who Don’t See Anti-Semitism 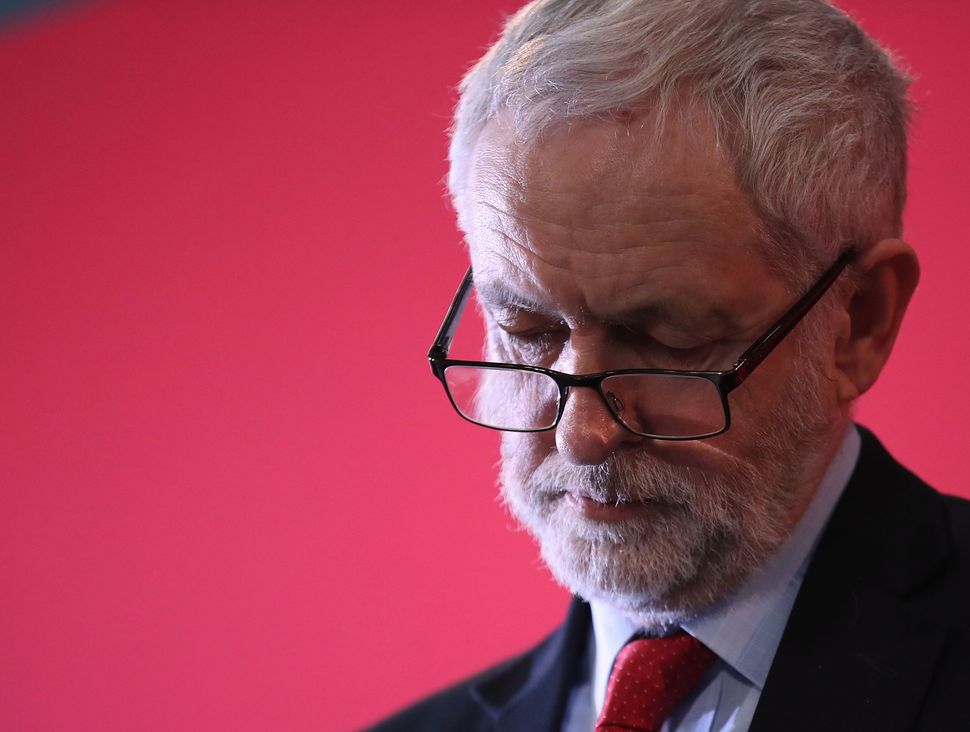 Here’s a thought experiment. Hang with it for a second, because it will help explain why some moderate Jews fear for the future of western democracy.

What if a Democrat stood for election as president of the United States after presiding over the DNC and being minority leader of congress for three years? It’s a lot of party responsibility for one person, granted, but what if this person — representing the country’s left wing — had also serially associated with racists both within and outside the party?

And, what if, when serially confronted with his and the party’s troubling affiliations, had failed to apologize or lead his party away from racism?

What if, for two of those years, say, the Democratic Party had been struggling with a series of internal probes into pervasive racism. And by “struggling” I mean the probe confirming that there was troubling racism and “struggling” because the leader kept making hollow apologies and failing to adequately address these explicit racists, their platforms or their positions in the party?

What if, further, that leader was discovered — just before taking over leadership of the DNC — to have taken part in not one but three secret Facebook groups (now five) that demonized a particular ethnic minority. And, further, to have objected to the removal of a mural depicting that minority in such a bigoted way that the local officials from both extreme right and extreme left had agreed it had to go? Think the most basic forms of stereotypical bigotry.

What if two representative organizations, like the NAACP — if they had never previously issued a joint political condemnation — were to condemn the leader as someone who, if not a racist himself, was “repeatedly found alongside” racists but claimed “never to hear or read them.”

And then, when that organization makes perhaps the most serious complaint in its entire history — to object to a series of explicit and public racist stances — numerous racists and some proxies of the leader were to smear the two organizations and, indeed, the entire ethnic group, as conspirators attempting to bring down the leader.

Could you vote for such a man? Could you even understand the people who would? 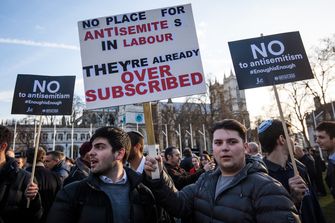 Protesters hold placards as they demonstrate in Parliament Square against anti-Semitism in the Labour Party on March 26, 2018 in London, England. The Board of Deputies of British Jews and the Jewish Leadership Council have drawn up a letter accusing Labour leader Jeremy Corbyn of failing to address anti-Semitism in his party. Image by Jack Taylor/Getty Images

This is, essentially, where British Jews are with Labour leader Jeremy Corbyn: a man and a party two steps from taking power in a country on the United Nation Security Council. A man who sits at the head of the Labour Party and who leads the minority party in the British parliament across from a Conservative Party wrecked by the Brexit civil war.

Having Corbyn fall so close to real power has caused a situation so serious and so persistent that the normally timid Board of Deputies of British Jews (established in 1760) issued a joint statement with the Jewish Leadership Council calling for a demonstration and saying:

There is a repeated institutional failure to properly address Jewish concerns and to tackle anti-Semitism, with the Chakrabarti Report being the most glaring example of this.

The next paragraph is even more pointed.

Jeremy Corbyn did not invent this form of politics, but he has had a lifetime within it, and now personifies its problems and dangers. He issues empty statements about opposing anti-Semitism, but does nothing to understand or address it. We conclude that he cannot seriously contemplate anti-Semitism, because he is so ideologically fixed within a far left worldview that is instinctively hostile to mainstream Jewish communities.

Of the many explanations of the situation, two of the best this week have come from Anshel Pfeffer detailing the situation in Haaretz and Hadley Freeman writing about the resulting demonstration in the Guardian.

NEW: Full text of statement from @BoardofDeputies and Jewish Leadership Council accusing Jeremy Corbyn of siding with antisemites over Jewish people and stating “enough is enough”. Tonight Corbyn said sorry for antisemitism in the party but they are standing by statement. pic.twitter.com/3ctHMvPTsV

But the important thing for an American audience to take away is that Britain, especially the Britain that is concerned with a progressive future, is being represented by a man whose countenancing of embedded racism — whether anti-Semitic stereotypes, Holocaust denial or the blood libel — has driven British Jews to unprecedented action.

Until this week, though he continues to avow his anti-racist stance, Jeremy Corbyn has repeatedly shown that he cannot recognize the anti-Semitism on the walls of London, in his Facebook groups, in the people he drinks tea with or in his own political party. How can we, how can any progressive, support someone like that as a force for good in the world?

The Danger Of Progressive Leaders Who Don’t See Anti-Semitism