After Suspending His Refugee Protection Plan, Netanyahu Is Trumpier Than Ever 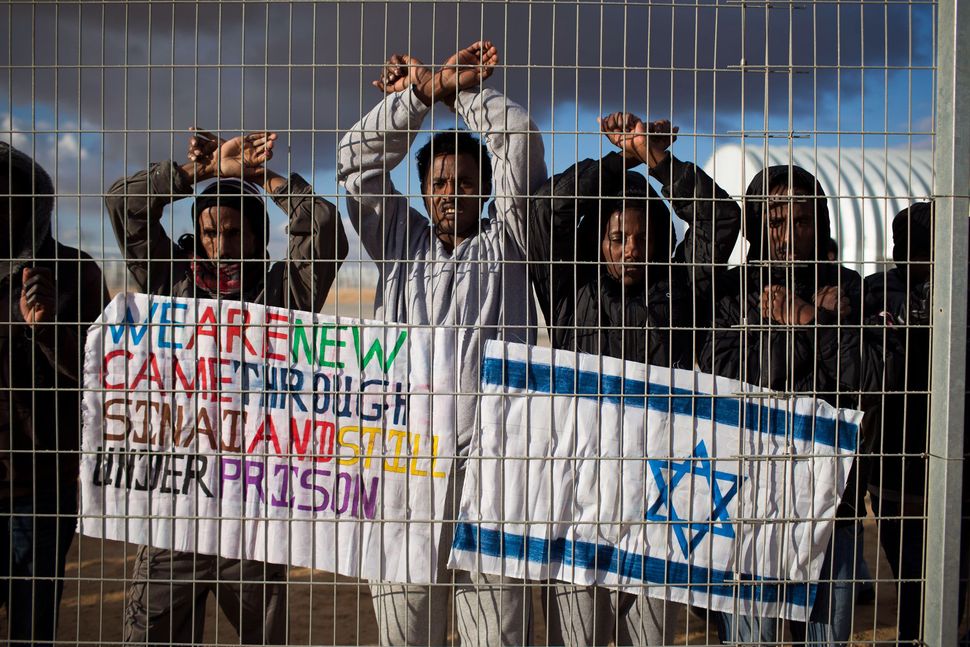 Today, just when the Israeli government was about to do the right thing, its prime minister turned into a spineless and inept politician, more interested in appeasing an extreme section of his domestic base than in leading with moral clarity and consistency.

That’s the only way I can view the seesawing behavior of Benjamin Netanyahu over the fraught status of Africans threatened with deportation. Not only does his stunning about face make him appear untrustworthy, it puts the lives of tens of thousands of people again at risk.

As of this writing, reports are still coming in on the day’s dizzying events. Earlier, Netanyahu announced that he was rescinding his government’s unconscionable decision to deport nearly 40,000 African refugees. It looked like he had wiggled his way out of a moral and political disaster, all with the help of the United Nations, the international organization his supporters love to demonize.

Then, three hours later, he announced: never mind. On Facebook, no less.

Apparently, the heat generated from Israel’s right wing, including political rival Naftali Bennett — who claimed that the new plan would turn “Israel into a paradise for infiltrators” — was enough to send the prime minister scrambling.

In the deal he had struck with the U.N., the government said it would send about 16,000 migrants to countries in Western Europe and allow others, many of whom are seeking asylum, to remain in Israel for at least the next five years. Migrants who would be absorbed by Western countries would have been allowed to work in Israel until they left, while those who stayed would have been granted legal status, a visa and eventual residency status. The government also pledged to improve living conditions in South Tel Aviv, where many asylum seekers live and many struggling older residents say they feel fearful and neglected.

When the deal was first announced, it seemed as if public pressure from inside and outside Israel had had a persuasive effect. Even though a majority of Israelis told pollsters that they favored the deportations — which human rights activists warned would send these refugees back to certain danger in Rwanda and Uganda — tens of thousands of opponents took to the streets of Tel Aviv in February and again in March in protest. Ordinary Israelis from El Al pilots to kibbutz members to Holocaust survivors vowed to help those threatened, many of whom had lived in Israel for years, spoke Hebrew fluently, held down often-menial jobs, and tried to be productive members of society.

The threatened mass deportations drew an unusual rebuke even from staunch Netanyahu supporters in the United States. A guest at one of our Seders said this upset him more than anything the government had tried to do in recent years. The cruelty seemed all the more ironic and troubling coming at Passover, a violation of the holiday’s central message to remember our own slavery and wanderings.

I had hoped that there was a broader lesson here. The racist undertones of the deportation policy — I’m sorry, there’s no other way to describe it — and the fact that the refugees did not pose a security threat to the nation had made their plight especially sympathetic.

But Netanyahu’s confusing handling of this issue has telegraphed a different message: Pleas to do the right thing don’t seem to matter. Neither do principled stands.

In this, he reminds me of another world leader, who continually backs away from his own avowals when they put him at odds with his core, extremist followers, be the issue sensible gun control or citizenship for Dreamers or a tax policy that truly helps those in need.

The more Benjamin Netanyahu acts like Donald Trump, the more I worry deeply for Israel — and for America. Courage and character are what we deserve most in our leaders; right now, they are virtues in dangerously short supply.

What else I’m reading. Reaction to the news from Gaza already is breaking down into predictable camps, with predictable accusations. For a sympathetic look at why Palestinians are protesting, Marilyn Garson’s Haaretz column is worth a read. For an eloquent version of an Israeli point of view, I suggest David Horovitz writing in the Times of Israel.

But if you seek a serious analysis that takes a critical look at all sides, read this column by Yossi Alpher, a Forward contributing editor and strategic expert. Warning: It’s depressing. But then, so is Gaza’s predicament.

And for a fascinating read closer to home, The Atlantic’s April cover story by Michael Gerson, How Evangelicals Lost Their Way offers invaluable insight into the perplexing question of how a strain of Christianity so steeped in morality could swoon over Donald Trump. Gerson was raised in an evangelical home, so this betrayal is personal.

“How did something so important and admirable become so disgraced?” he asks. It’s a question that could apply more broadly in America, too.

Looking forward. Most of the special decorations and dishes I use only for Seders — the ceramic frogs and haroset bowls, the platter big enough for all that brisket and the finger puppets of Ten Plagues, the wine-stained Haggadot and the homemade pillows — have been put away. But the holiday is still young, and the silver cutlery that I inherited from my parents will be used through the week. I may tire of matzo sandwiches by day seven. I will never tire of using those precious forks and spoons.

Please do stay in touch by emailing me at JaneEisnerEIC@forward.com.

After Suspending His Refugee Protection Plan, Netanyahu Is Trumpier Than Ever