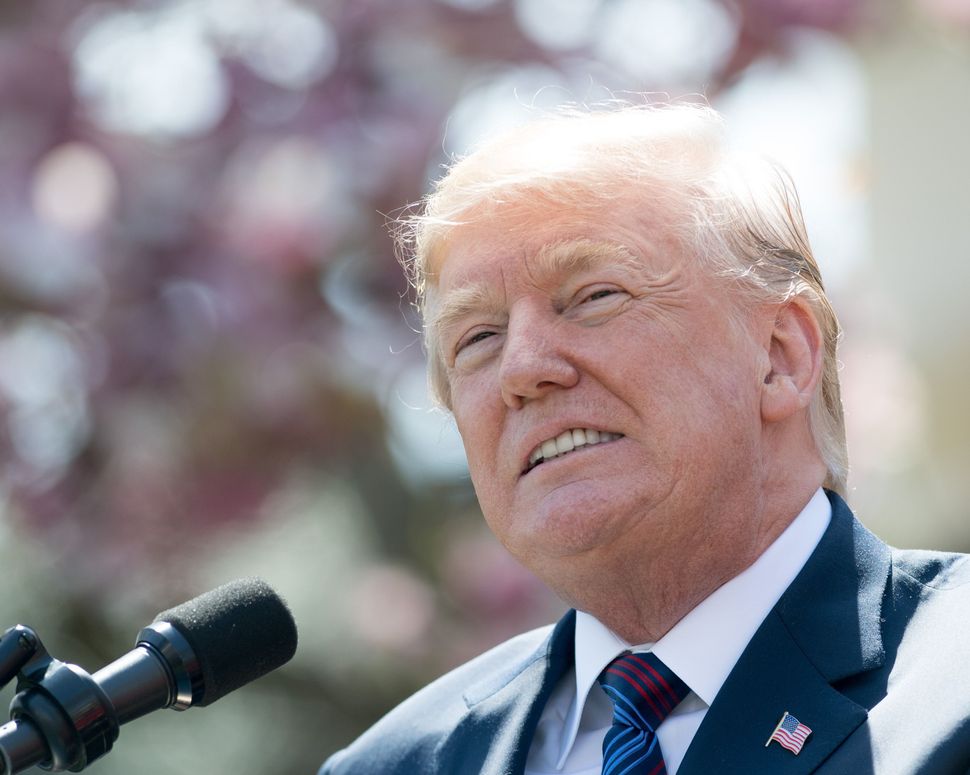 At a conference on religion about 15 years ago, the journalist Franklin Foer made this witty observation: “Philo-Semites are anti-Semites who like Jews.”

Little could Foer have imagined that he would be describing Donald Trump as President.

We now have in the White House a man with a confounding and often contradictory relationship with Jews. He employed men like Steve Bannon and Sebastian Gorka, who pal around with the neo-Nazi alt-right, and when he marked International Holocaust Remembrance Day his first year in office, he somehow managed to leave out Jews. He offered nice words about white supremacists marching in Charlottesville, employed classic anti-Semitic tropes during his campaign, and has done little to stave off the onslaught of hateful behavior by his minions on social media.

If all that doesn’t make him an outright anti-Semite, he sure seems like someone who played one on TV.

But, counter-intuitive though it is, Trump is also a kind of philo-Semite, fawning over certain men because of what he sees as their positive Jewish traits, unaware (perhaps) that he is drawing upon insidious anti-Semitic caricatures that paint Jews in an unflattering, even demeaning light.

Cohen, Trump’s long-time legal fixer, was the target of an FBI raid Monday at his home and office, and is being investigated for possible wire fraud, bank fraud and violating campaign finance regulations.

Dershowitz isn’t being investigated for anything. But this week, he’s been a frequent guest at the White House, suddenly becoming one of the president’s most reliable and ardent legal defenders and, if this is to be believed, a chief interlocutor with the Israeli government.

What seems to impress Trump about Dershowitz are his regular stints on Fox TV and his legal credentials. As Politico noted: “Over the past several months, the president has seized on Dershowitz’s public remarks, using them as intellectual justification for his own views. ‘So stated by Harvard Law Professor Alan Dershowitz,’ Trump tweeted last month after quoting him at length.”

Now, it may be that we are aware of Cohen and Dershowitz’s outsized roles because they are nearly the last ones standing, as so many others who worked for and advised this president have left the premises. But Trump’s tendency to focus on specific and often superficial qualities when relating to Jews predates his current, desperate predicament.

Jonathan Chait wrote about this in a cheeky 2015 column for New York magazine entitled “Why Does Donald Trump Hire Terrible Doctors and Lawyers?” The context was the assertion from Trump’s personal physician, Dr. Harold Bornstein, that the then-candidate would be, if victorious, “the healthiest individual ever elected to the presidency” — a statement he could not justify without supplying the medical records of the 44 men who came before him and he, naturally, did not.

Why would a wealthy man like Trump, living in a city with a surfeit of doctors, rely on Bornstein’s over-the-top evaluation? Perhaps because he’s Jewish, Chait surmised. Jews make fine doctors. (Which is true. I’m married to one.)

That same philo-Semitism, Chait offered, explained Trump’s relationship with Cohen, who even then appeared to provide questionable legal advice. As Chait noted:

“Cohen defended his client against a charge that he raped his wife, Ivana, like so: ‘And, of course, understand that by the very definition, you can’t rape your spouse … It is true. You cannot rape your spouse. And there’s very clear case law.’ That is not actually the law. Nor is it an especially well crafted public-relations message. So, what reason would Trump — who, again, has his choice of some of the world’s most respected lawyers — retain a counsel who lacks the familiarity with rape law of even your average Law & Order fan? Could he have simply assumed that anybody named ‘Michael Cohen’ must be good at lawyering?”

This tendency was on display again when Candidate Trump addressed the Republican Jewish Coalition and assumed that everyone in the room was a good negotiator, declaring that he wouldn’t win their support because “I don’t want your money.” (Here are a few more examples from the campaign.)

Jews must be good doctors and lawyers and negotiators. They must want the political influence money can buy. They must be smart — actually, more than smart. They must be clever.

The fact that Trump’s thinking and behavior is often shaped by stereotypes has serious political and diplomatic consequences. Trump chose David Friedman, a bankruptcy lawyer, as his ambassador to Israel, and Jason Greenblatt, another Trump legal groupie, as his chief negotiator in the region. Neither man had ever worked on Mideast policy, nor in any diplomatic capacity.

And I don’t even need to say much about Kushner, who also was charged with helping to negotiate said peace agreement, and is no more qualified, or successful, than the others.

But I go back to Foer’s observation. Just because Trump likes certain Jews, doesn’t mean he understands and appreciates the Jewish people. Or couldn’t, in the right moment, turn his fawning into fury and unleash the anti-Semitism that may, indeed, still lurk beneath the surface.