Can J Street Bring Down The Trump-Netanyahu Axis? 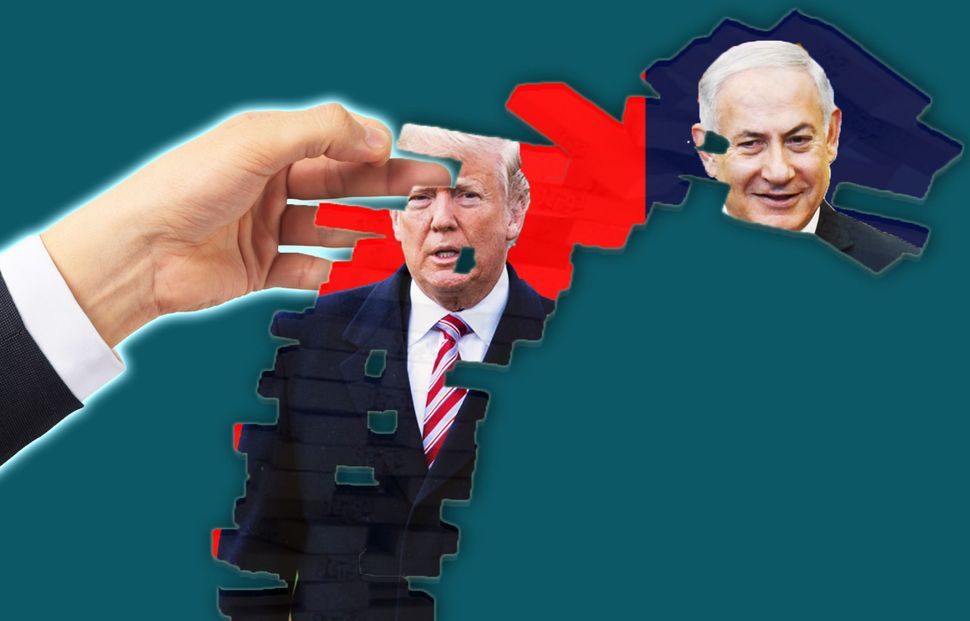 For many months now, progressive American Jews and their Israeli counterparts have been watching as our two countries careen down parallel tracks of illiberal democracy at break-neck speed.

The political situations play out like competing versions of the television series Homeland and Hatufim, one in English, the other in Hebrew, but in real life and in real time. We know the plot lines – criminal investigations surrounding our leaders, the erosion of democratic norms and the scapegoating of vulnerable populations. Occasionally the actors from one show cross over into the other, most notably when President Trump and Prime Minister Netanyahu appear at each other’s doorstep to literally embrace each other, lock hands, and exchange grins like two Cheshire cats, giving new meaning to the terms unbreakable bonds and shared values.

In the midst of this alarming rise of illiberalism in the US and Israel, J Street convened its annual four-day conference in Washington, marking its tenth anniversary. Like all political gatherings, J Street’s conferences have been shaped by the unique circumstances of the day, ranging from periods of great optimism during American-led negotiations over a two-state solution to a take-to-the-streets fury in the wake of elections signaling an ever-receding diplomatic horizon for ending the occupation. What marked this year’s conference was the joint awareness by the Americans and Israelis in attendance of the common threat they face. By drawing straight lines from Donald Trump to Benjamin Netanyahu and back again, speaker after speaker also laid the foundation for building a new and meaningful partnership between American and Israeli champions of democracy. Where the Netanyahu government and its enablers in the American Jewish community have perverted the words unbreakable bond to mean an unassailable vice grip of occupation over 4.5 million Palestinians, the speakers and attendees spoke about a bond rooted instead in the notion of the shared values of human rights and dignity for all.

Powerful Palestinian voices at the conference highlighted Professor Yeshayahu Leibowitz’s warning after the Six-Day War about the occupation’s corrosive effect on democracy. Over fifty years later, we have seen that effect clearly in Israel — but also in parts of the American Jewish community that become inured to the daily indignities suffered by Palestinians, the demolition of their homes and villages, and the humanitarian crisis in Gaza.

MK Tamar Zandberg, the newly elected Chair of Meretz, set the tone on the opening night when she spoke of the existence of shared “contempt for civil rights … starting at the highest levels of American and Israeli governments,” and the “clear alliance between right-wing camps in Israel and in the U.S.” She noted the camps’ “embrace of each other” and their “pardoning of American and European anti-Semites.” The outspoken progressive leader framed the moment well: “Today we are not just supporting each other; today we are standing together. Today we are in an unprecedented political moment when the very things we need to change about Israel have become the same ones you resist and fight for here in the US.” She called the battle against occupation and the battle against racial inequality the same fight.

But it’s not only progressive stalwarts like Zandberg that see through the shared Trump-Netanyahu playbook. The same theme was echoed throughout the conference, including by those whose careers have played out more on the political center-left.

Tzipi Livni addressed the threats to “the rule of law, freedom of speech, an independent legal system and a free press,” in Israel and the United States, stressing the need for liberals “to unite and to fight” for their democratic values. Senator Ben Cardin (D-MD), a longtime stalwart advocate for the importance of the US-Israel relationship, compared Netanyahu’s treatment of African asylum seekers to Trump’s travel ban directed at Muslim majority countries, stating that we have “A responsibility to speak out against the policies of Israel or the United States that are not consistent with our Jewish and democratic values.”

Importantly, over the four days of the conference, the over 3,000 attendees didn’t simply bemoan the current crisis — we prepared to take action to fight back and change our nations’ political directions. In November, Americans will have a chance to strike a blow against the Trump-Netanyahu partnership by electing a Congress that will fight for our goals and values.

In a roof-raising keynote speech, American Federation of Teachers’ president Randi Weingarten implored Americans and Israelis to face down the threats to their democracies by moving “from a rallying nation to a voting nation.” With those words resonating in our heads, the members of the pro-Israel, pro-peace movement left the conference inspired to do everything we can to translate our frustration and our energy into victory at the polls this fall.

Richard M. Goldwasser is an attorney in Chicago. He is a former J Street board member and is the current chairperson of J Street Chicago.

Can J Street Bring Down The Trump-Netanyahu Axis?