Pulling Out Of The Iran Deal Will Hurt Israel 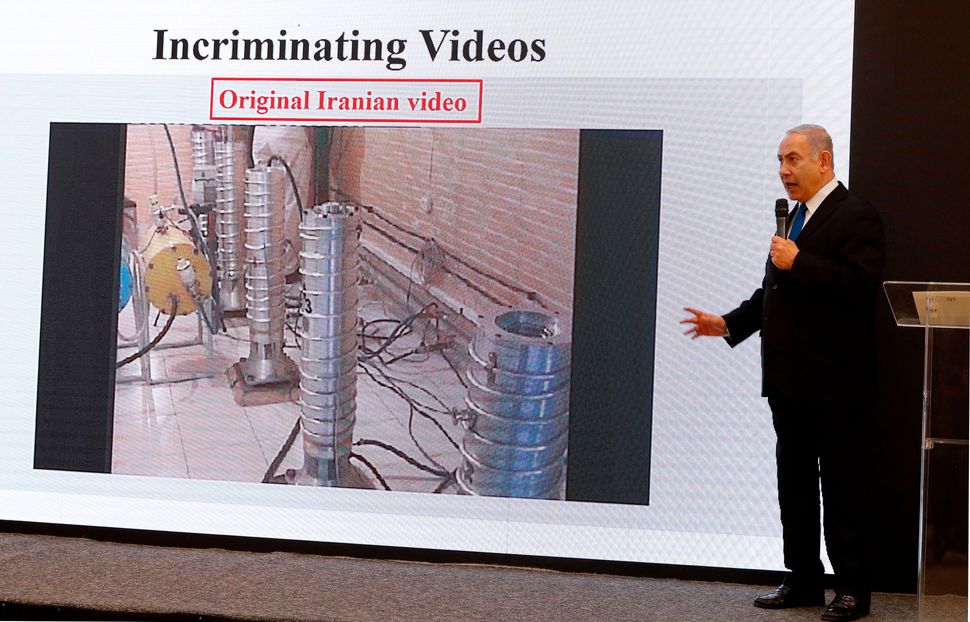 Prime Minister Netanyahu’s presentation Monday afternoon offered little new information on Iran’s illicit nuclear activities. But it did shift debate over the Iranian nuclear deal into high gear ahead of a May 12 deadline to extend sanctions relief tied to the deal.

Throughout this debate Israel has been a key player. But a US withdrawal from the agreement would threaten Israel’s security.

Why Israel Disliked The Deal

There are three reasons Israeli officials disliked the Joint Comprehensive Plan of Action (JCPOA), AKA the Iran nuclear deal, upon its adoption in 2015.

First, negotiations on the deal began in March 2013 without Israel’s knowledge. Israel did not find out until September that its closest ally had been negotiating with its deepest enemy behind its back.

Needless to say, this surprise fostered anxiety and resentment among Israeli policymakers.

Second, the risk of a failed Iran deal is higher for Israel than the US. For the United States, such a failure would harm Middle East stability and create the risk of another overseas war. But for Israel, it would escalate a conflict with a country in the same region, one which routinely calls for Israel’s destruction. US assistance in the form of missile defense technology is helpful, but cannot relieve Israel of the psychological burden of Iranian threats.

Finally, the deal is an Obama administration policy, which makes it suspicious on its face to many Israeli policymakers. Many Israelis held a deep suspicion toward Barak Obama during his presidency. His administration’s position on settlements, voting record at the UN, and public pressure on Israel served to confirm this latent mistrust.

The Iran deal, as the centerpiece of the Obama Middle East policy legacy, inherently brews similar suspicion among many Israeli decision makers regardless of its content.

Despite these concerns, withdrawing from the Iran nuclear deal would endanger Israel’s security. No international agreement can guarantee compliance, especially with a country that regularly violates international norms. But 2018 is not 2015. Withdrawing from the nuclear agreement would have different effects than a hypothetical 2015 in which the deal had never been concluded.

Withdrawing From the Deal would Kickstart Iran’s Nuclear Program

Prime Minister Benjamin Netanyahu is correct that Iran possesses some nuclear weapons knowledge. The Iran nuclear deal, however, limits Iran’s ability to act on this knowledge. As a result of the agreement, Iran filled the nuclear core of its Arak reactor with concrete, shipped its stockpile of enriched uranium to Russia, and removed thousands of centrifuges from its facilities at Fordow and Natanz. These actions increased the time it would take for Iran to acquire sufficient fissile material for a weapon from two or three months before the deal to about a year now.

Iran’s leadership did not take these steps in “good faith.” Rather, it faced strong economic pressure from Iran’s population. Tying future relief to continued compliance with the deal is working. It will continue to be Israel’s best strategy for constraining Iran.

Were the US to withdraw from the agreement, however, this incentive for Iranian compliance would disappear. Iran would likely restart its nuclear activities and move full speed ahead toward a weaponized nuclear capability which would threaten Israel’s existence. Iran would achieve this capability in months rather than in a year or more. Any pre-emptive Israeli airstrike could draw an Iranian retaliation that would threaten Israeli lives.

The Mossad’s acquisition of 100,000 Iranian nuclear documents suggests it has good access within Iran. However, the Iran nuclear deal provides other important mechanisms for Israel and the international community to monitor Iran’s nuclear activities. If indeed Iran cannot be trusted to act in good faith, this monitoring is critical to Israel’s security.

Under the deal, the International Atomic Energy Agency has installed cameras in Iran’s nuclear facilities that collect hundreds of thousands of images per day. In March, the Trump administration allowed an American company to send high-tech equipment to Iran to better monitor any nuclear explosions.

Even if Iran never pursues a nuclear weapon, the extent to which its nuclear activities are exposed to the world’s intelligence agencies is unprecedented.

A US withdrawal from the deal, however, would harm Israel’s ability to collect valuable intelligence about Iran’s nuclear capabilities and counter them. IAEA Director General Yukiya Amano confirms that “without the JCPOA, we would have much less knowledge of Iran’s nuclear program.” Given the threats Iran makes regularly against Israel and its people, this monitoring capability is critical.

Iran has been responsible for the death of Israeli citizens all over the world, and threatens them inside Israel too. Constraining Iran’s support of groups like Hizbullah and Hamas requires multilateralism. As a nuclear arms agreement, the JCPOA contains no provisions regarding terrorism. It does, however, represent a multilateral effort to constrain the Iranian threat.

Were the Iran nuclear deal to fail or were Iran to withdraw, the US and Israel would have strong leverage to secure international support for deterrence or a military engagement with Iran. The failure of diplomacy would tie these countries to the military option. Given the strained relationship European countries in particular often have with Israel over its military policies, such support would be hard to achieve through other means. Were the US to pull out of the nuclear deal, however, this support would be undermined.

A US withdrawal from the Iran nuclear deal would kickstart Iran’s ability to threaten Israel, hurt Israel’s intelligence gathering capabilities, and damage the existing multilateral coalition that would help Israel constrain Iran should the deal fail by other means. Even if the deal is doomed from the start, withdrawing from imposes additional dangers to Israel’s security. Only by using the deal as a building block for further agreements on Iran’s ballistic missile program and human rights violations can the United States avoid jeopardizing the security of its closest ally in the Middle East.

Scott Weiner is a professorial lecturer in political science at The George Washington University in Washington, D.C. He researches gender and Middle East politics.

Pulling Out Of The Iran Deal Will Hurt Israel