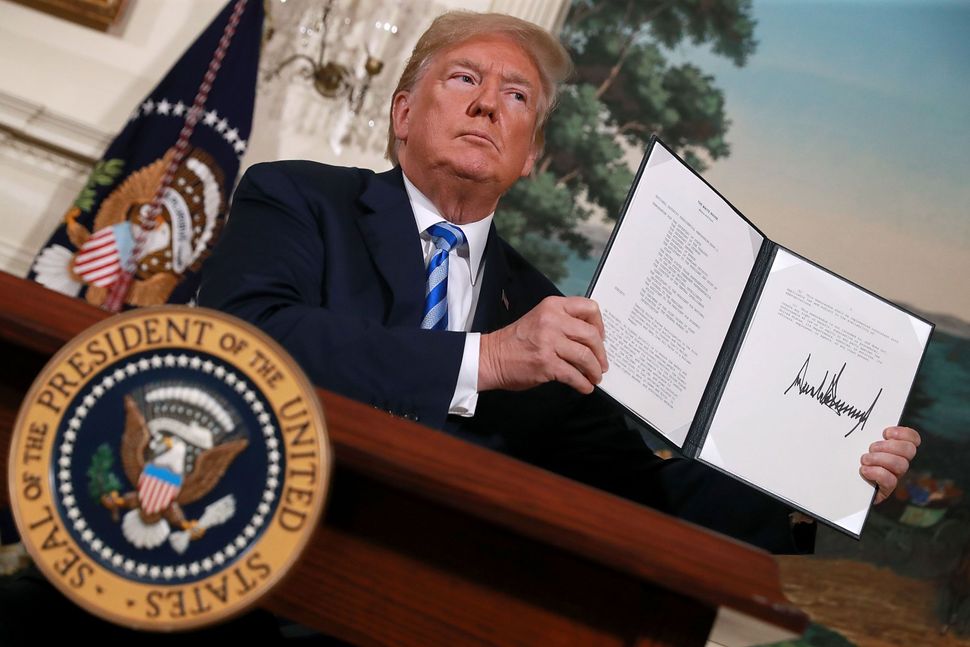 Listening to Donald Trump announce that the United States will brazenly violate its commitments under the Iran nuclear deal, I had a similar thought. In the outlooks of their governments, Israel and the United States are now one. Ideologically, it no longer makes sense to speak about “The West.”

There are two Wests. One based in Berlin, Paris and London. The other based in Washington and Jerusalem.

The first West believes in international institutions and international law. The second scorns them, and champions sovereignty instead.

The first West champions diplomacy based on mutual compromises between longtime adversaries. The second champions “maximum pressure” until adversaries’ crack.

The first recognizes the dangers of trying to overthrow foreign governments. The second, despite the coup against Mossadegh, despite the invasion of Iraq, still thinks regime change is wise and moral.

The first West sees Iran and Saudi Arabia as authoritarian, self-interested rivals jockeying for position in the Middle East. It hopes for détente. The second sees Tehran as a uniquely malevolent and destabilizing, while seeing Riyadh as moderate and reformist. It wants to escalate the cold war.

The first West believes Palestinians have the right to be citizens of the country in which they live. The second does not.

The first West respects the right of journalists and nongovernmental organizations to operate without harassment. The second demonizes and restricts them.

The first West fears the rise of bigoted, anti-Muslim political movements that views foreign policy as a clash of civilizations between the Judeo-Christian and Islamic worlds. In the second, those movements already hold power.

I’m an American and a Zionist. The United States and Israel are the two nations closest to my heart. Europe is, culturally, far more alien.

And yet I know that it is this first West — led by Angela Merkel and Emmanuel Macron and even Theresa May — that better reflects my ideals.

Benjamin Netanyahu is not a democrat. Close to half the people under his de facto control — the Palestinians of the West Bank and Gaza Strip — are non-citizens without due process, free movement or the right to choose the government that dominates their lives. And Netanyahu wants to keep it that way.

Donald Trump is not a democrat either. He admires authoritarians and in myriad ways, seeks to make it harder for Americans to vote. Merkel, Macron and May, whatever their flaws, have some basic commitment to the rule of law. They have some basic understanding that, in international affairs, honorable governments keep their word.

For as long as Trump and Netanyahu hold power, those of us who live in the Second West but believe in the liberal democratic ideals championed by the leaders of the First will face an unusual challenge. It will be to strengthen the hands of foreign governments in their confrontations with our own.

I don’t want Merkel, Macron and May to seek an accommodation with Trump and Netanyahu on Iran. I want them stand up for the principles that the American and Israeli governments have betrayed. Appeasement has not worked. Maybe it’s time that the liberal democratic leaders of the First West make life uncomfortable for the authoritarian bigots of the Second.

As an American Jew, I hope, one day, to again feel pride in my country’s government, and in my people’s. Until then, I’ll be a partisan of the governments in London, Paris and Berlin.