All We In Gaza Want Is That Israel Recognize Our Humanity 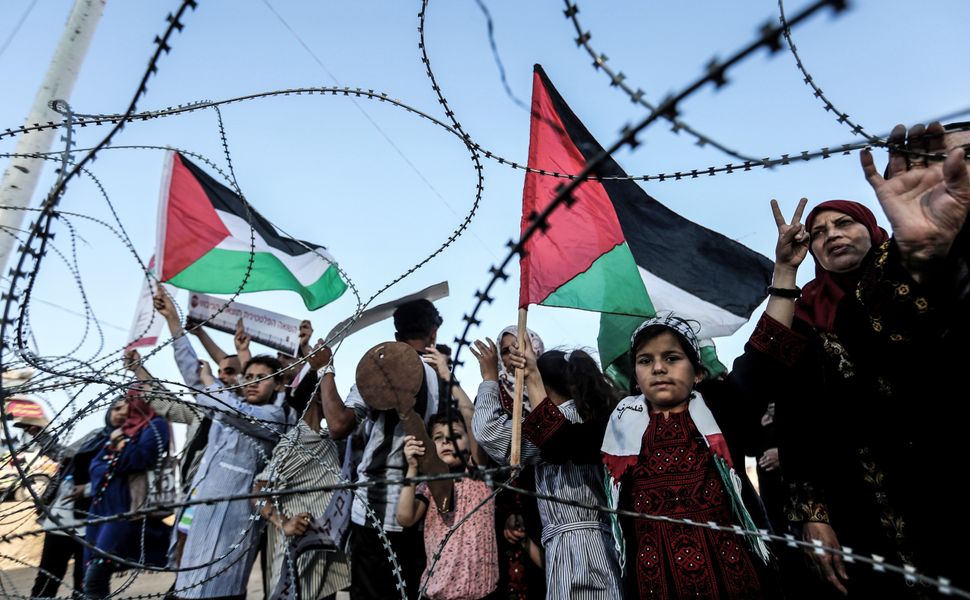 Today was a heartbreaking day for Gaza. While American and Israeli leaders celebrated a new American embassy in Jerusalem, protests along the Israel/Gaza border resulted in 55 Palestinian deaths. A number of them were children. Throughout the day, the numbers skyrocketed, from 16 to 40 in just one hour. Of those who survived, 2,000 were injured; many will live out their lives with new and life-changing disabilities.

A close friend who was there told me that the IDF snipers were shooting indiscriminately at anyone who approached the separation fence. No IDF solider was even scratched in return. In one single incident, my friend said that the IDF snipers killed 11 Gazans and seriously wounded at least 100 when they attempted to breach the fence. Thousands of young people were attempting a mass jailbreak of what a Haaretz editorial once called “the Palestinian Ghetto.”

“We were met with unprecedented brutality. Live bullets were raining down on us from everywhere,” he said.

And the reason given by the army later – that they were armed – was untrue, he insisted. “There were no such attempts to plant improvised explosives,” he told me. “None of the protestors were allowed to carry guns to the protest. We were massacred for trying to break out of Gaza’s solitary confinement.”

The Israelis have a number of ways of justifying the carnage in Gaza. But on closer inspection, each breaks down.

There was the outrageous footage of the swastika sign, the most horrendous sign of terror in our times, drawn on a white flag and flown by some of the protestors. In another incident, swastikas were drawn amongst other symbols on two kites with small torches hung to their tails. The kites were intended to be flown in Israel’s direction in an attempt to burn wheat crops and draw attention to the protests.

These swastika incidents were invoked time and time again on Twitter to demonize the protestors, and to suggest that Palestinians harbor homicidal feelings towards Israelis.

And yet, they stem more from ignorance and isolation than from Holocaust denial or even anti-Semitism. Most Gazans have never met an Israeli or a Jew in their lives; how could they understand what these symbols mean to Jews?

Rather than an excuse to maintain the blockade, this ignorance is all the more reason to end it. Until Palestinians and Jews can meet, how can they ever understand each other?

The swastika incidents were the exception rather than the rule. Nonetheless, I felt deeply shocked and upset when I saw this footage, and so did many Gazans I know who understand the significance of the symbol; in fact, there were some at the protests who told me they urged others not to use such signs. For even drowning in the darkest levels of despair, the bond of humanity must never be broken and replaced by blinding hatred or dehumanization of one another.

Another excuse Israel gave for massacring Palestinians at these protests was that the right of return is itself a call to end Israel, and thus, infiltrating Israel is an act of violence.

I understand and respect the need of the Jewish people to establish a safe, strong and prosperous homeland, a sanctuary to shield Jews worldwide from persecution and to stand for each single Jewish individual wherever they are.

Yet, such homeland can certainly be established and maintained without the ongoing systematic dispossession, humiliation and punishment of the Palestinian people.

Israel’s naval, land and air blockade, imposed on Gaza since 2007 as a form of collective punishment against the civilian population in violation of the international law, degraded the economy and destroyed the private, agricultural, industrial and service sectors. The blockade was punctuated by eight hi-tech military operations that destroyed the infrastructure, the electricity plant, water distillation facilities and tens of thousands of homes. Eventually, fully 97% of Gaza’s drinking water has become unfit for human consumption.

And yet, the blockade prevented neither primitive projectiles nor wars. As Peter Beinart argued, it’s a myth that the blockade protects Israel and is necessary for its security. “The dirty little secret of Israel’s blockade is that elements of it are motivated less by any convincing security rationale than by economic self-interest,” Beinart explained in an extensive article exploding the mythology surrounding Gaza.

Another frequent talking point is that Hamas is to blame for the carnage. Time and again, you hear Israeli and American leaders blaming Hamas for sending people to their deaths, and for using people as human shields.

And yet, it is not Hamas that is pulling the trigger. It’s Israel.

Throughout the day, we were assaulted by images of Palestinians being shot and killed, while American and Israelis dignitaries ate and partied in the new embassy.

Jared Kushner, President Trump’s son in law, has been tasked with solving peace in the Middle East. And yet in prepared remarks to the audience at the Jerusalem embassy, he made a chilling statement.

“As we have seen from the protests of the last month and even today, those provoking violence are part of the problem & not part of the solution,” Kushner said.

How are we Gazans supposed to feel about our fate being in the hands of one who would blame the victim?

We are asking only to be seen as humans, whose blood is not cheap. Is it too much to ask?

Muhammad Shehada is a writer and civil society activist from the Gaza Strip, and currently a student of Development Studies at Lund University.

All We In Gaza Want Is That Israel Recognize Our Humanity