Why On Earth Is Ivanka Being Blamed For Bloodshed In Gaza? 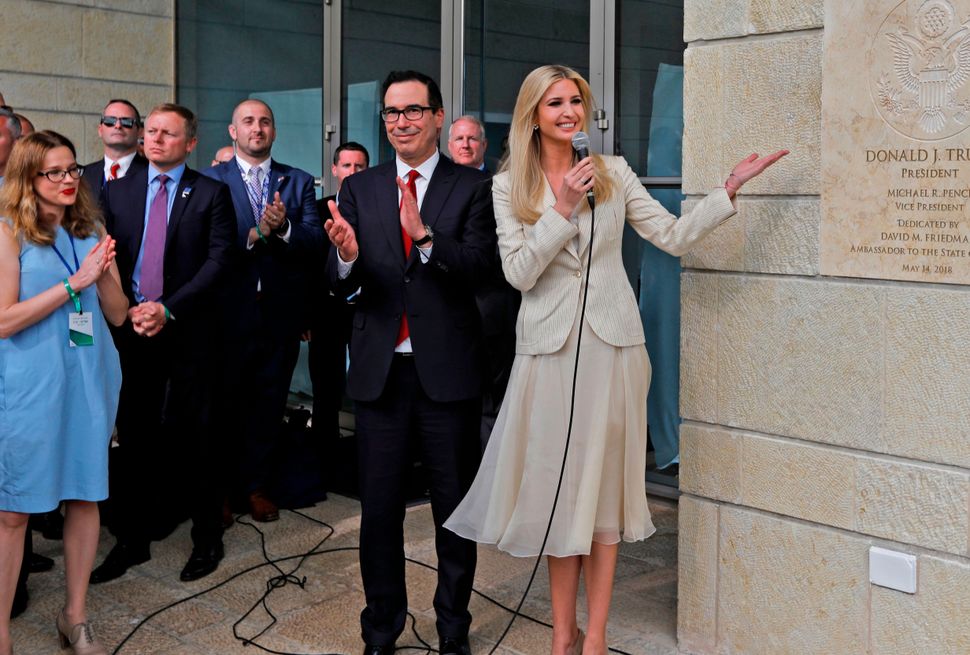 The day after the dedication of the embassy in Jerusalem, the cover of the New York Daily News featured a front page photo of Ivanka Trump with the caption “Daddy’s Little Ghoul: 55 slaughtered in Gaza, but Ivanka all smiles at embassy unveil.”

The headline implied two things: first, that she was responsible for the violence, and second, that she is a proxy for her father. By playing on the phrase, “Daddy’s little girl,” it suggested that she’s a child rather than an adult, incapable of thinking or acting for herself, while simultaneously blaming her for the bloodshed in Gaza.

The Daily News wasn’t the only one to belittle Ivanka on gendered grounds. Writing in a New York Times editorial, Michelle Goldberg wrote of “Ivanka Trump smiling in Jerusalem a Zionist Marie Antoinette.”

And yet, this kind of coverage is par for the course with Ivanka and Trump detractors. She is always too female, too pretty, too young, too daughter-ish. Note that no one called Jared Kushner — who actually spoke at length — a Zionist Marie Antoinette, or created newspaper covers calling him “Daddy’s Little Boy.”

It’s an incredible double standard, and a troubling one at that in the case of the embassy move. Is Ivanka responsible for the move and the violence supposedly surrounding it because she’s the President’s daughter, or because she’s his Jewish daughter, or just because she’s a pretty face to put on a newspaper cover?

And it’s not just blaming her for bloodshed she could not have controlled. Ivanka is somehow responsible for all of her father’s missteps, though she gets credit for none of his successes.

Since the campaign, we’ve expected Ivanka to be responsible for keeping her father in line. Moderates and even liberals again and again called Jared and Ivanka “moderating forces.” Ivanka was supposed to check her father’s outlandishness, the beautific face of an unruly campaign.

After the neo-Nazi fally in Charlottesville, Virginia, Ivanka and Jared were expected to “moderate” Trump’s wishy-washy stance, with no success. This expectation remained after Ivanka personally tweeted her condemnation of the events.

Ivanka was also slammed for tweeting positively about Pride month while her father stayed silent.

This is an entire genre of journalism; Ivanka does something positive while her father does not, and somehow, she becomes the villain for not managing to make him act in a way that would be more palateable to his critics.

The general media has had a field with its crazy expectations of Ivanka. But the Jewish media has been no better.

Around Purim every year we’re subjected to the same question in the opinion pages: Is Ivanka, a convert to Judaism and an Orthodox Jew, our Queen Esther?

And inevtiably the proclamations that Ivanka has failed the Queen Esther test, over and over.

If the media, in particular the Jewish press, is going to hold Ivanka responsible for keeping her father in line with the interests of the American and Jewish people, respectively, shouldn’t she be given some praise in the weeks after the embassy was moved, decades after it was first promised?

Several Presidents, both Democratic and Republican, have made the pledge on the campaign trail and after, but only President Donald Trump actually delivered. One doesn’t have to don a MAGA hat in order to acknowledge this basic fact.

We can’t on one hand hold Ivanka responsible for not speaking up against anti-Semites among her father’s base (as I did during the primary season without also praising efforts undertaken by Ivanka and her husband Jared Kushner to convince their father and father-in-law to move the embassy.

We are unclear what efforts Ivanka and Jared have taken regarding anti-Semitism, nor do we know what they did about the embassy move; but we can’t have our cake and eat it too. Nobody, not even John Kelly, really understands what Ivanka and her husband do in the White House. If we believe the President’s daughter is influential enough to persuade her father to speak out about anti-Semitism and hold then Ivanka to account for when he doesn’t, than we have to acknowledge she would be equally influential regarding Israel policy.

Why On Earth Is Ivanka Being Blamed For Bloodshed In Gaza?