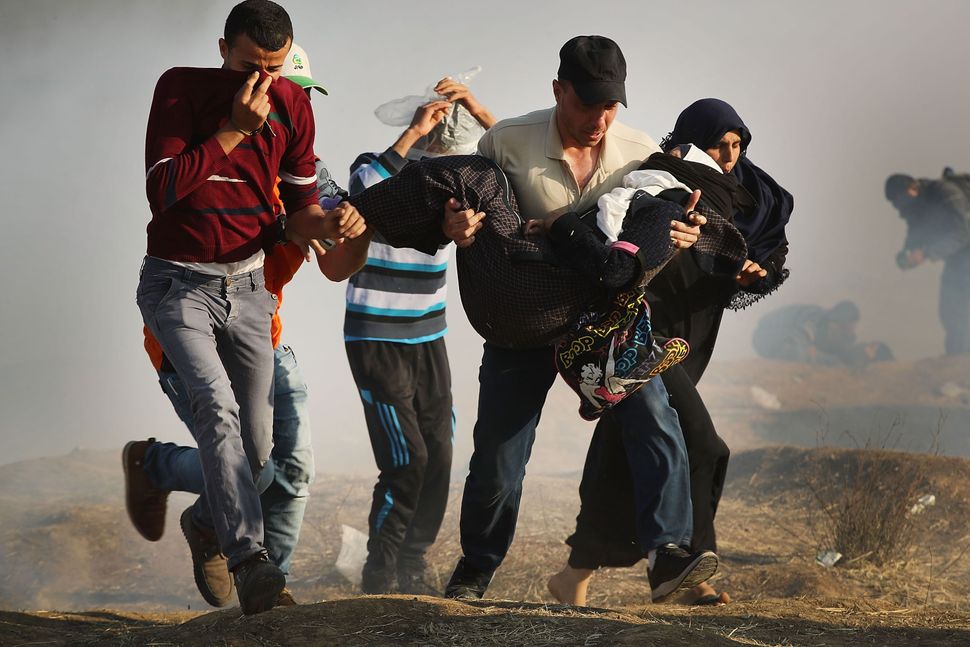 Last Monday, Israel’s security forces faced off against 40,000 angry Gazans. Some were armed. All were incited by Hamas to tear down the fence separating Gaza from Israel and implement en masse the sacred principle of “return.” And though the majority kept their distance, time and again groups of young men would approach the fence, sometimes armed, sometimes succeeding in damaging it or breaking through.

Israeli sharpshooters killed 62 Gazans on or near the fence. They were closely monitored by IDF officers well briefed on the laws of war. On Tuesday, an Islamic Jihad spokesman announced that three of its fighters were among the dead. On Wednesday, a Hamas spokesman acknowledged that 50 of the dead were Hamas fighters. In other words, Israeli snipers shot to kill 53 Palestinian fighters, by the Palestinians’ own count, who were armed, detonated explosives or opened fire on the IDF.

That leaves nine Palestinian civilians who were presumably killed accidentally. There were also a large number wounded by the thousands of rounds fired at the feet of those unarmed civilians storming the fence.

The IDF did what any army would do under these circumstances, and probably better than others, though I am not one of those who talk piously about “the most moral army in the world”.

Yet Israel lost the global public relations war in this round. As one IDF spokesman put it, Israel suffered a “hasbara [public diplomacy] knockout.” That Palestinian mobs have twice set fire to the Kerem Shalom crossing where humanitarian aid is delivered to the Strip makes no difference. Nor does the Hamas refusal to accept desperately needed medical equipment from the IDF.

Admittedly, contemplating all those dead and wounded Palestinians desperately shot at the fence is enough to turn anyone’s stomach. And yet, the soldiers did their job, professionally, legally, even morally. When possible, they relied on rubber bullets, tear gas and other less-lethal means. But it was not always possible. So what went wrong here? Who is to blame? The fault is hardly entirely Israel’s.

The Arab world shares a portion of the blame. Uniquely in global refugee annals, the Arab states have collectively and deliberately prolonged the Palestinian refugee plight well into the fourth generation. The United Nations and the rest of the world are complicit here too. Egypt, an Arab state bordering on Gaza, keeps its border closed because the Palestinians have to be Israel’s problem rather than an Arab problem.

On the other hand, note that these days the Arab states have practically given up on the Palestinians. Arab leaders blame the Palestinian leadership for rejecting legitimate Israeli peace offers in 2000 and 2008. They see PLO leader Mahmoud Abbas (Abu Mazen) as a failed leader and Hamas as Islamist and extreme. The Saudis and their neighbors are so fed up with the Palestinians that they barely pay lip service to the dead in Gaza.

So Palestinians bear some of the blame, too, for the situation in Gaza that led to the deaths on Monday. Starting at the ideological level, most Palestinians and indeed most Arabs believe that Israel is an artificial imperialist creation. Jews are not a people. They have no genuine historical roots in the Holy Land. The Palestinian right of return claim is essentially an assertion that the State of Israel was born in sin 70 years ago. Accordingly, Palestinians in Gaza apparently convinced themselves that a concerted mass effort to implement return would somehow succeed in breaching the border fence. They would unmask Israel’s inherent lack of legitimacy, hence lack of resolve. .

The American decision to inaugurate an embassy in Jerusalem added in Palestinian eyes insult to injury: Palestinian leaders preach that Jews have no rights in Jerusalem; as Abu Mazen repeats regularly, “there never was a temple on the Temple Mount.”

Indeed, Abu Mazen himself bears some of the blame. Midst his anti-Semitic diatribes in Ramallah and as he fends off challenges to his fading leadership, Abu Mazen also punishes Gazans by withholding funds and demanding that Israel do the same. Because he is Israel’s UN-certified negotiating partner and is at least prepared to discuss a two-state solution—albeit on impossible “right of return” and “never was a temple” terms—we bow to his dehumanizing demands regarding Gaza.

And of course, Hamas is to blame. It is a militant Islamist movement that refuses to talk to Israel, much less recognize it. It is blatantly anti-Semitic. It is ghoulish: it holds the remains of dead Israeli soldiers for ransom. It uses generous aid money and building materials to dig attack tunnels under the fence. Yet having blamed everyone else, let’s recognize that Israel is also to blame at the strategic level. The only “strategy” Israel has today for the Gaza Strip is periodically “mowing the lawn”—bloodying Hamas’s nose in a fight Hamas initiates in the hope of deterring it for a few more years. We just saw how well that works. Inaugurating the US embassy in Jerusalem on Nakba Day and near the start of Ramadan was an American and Israeli mistake that played right into Hamas’s hands. The content of the Jerusalem ceremony was an affront: the world witnessed a real-time disgusting performance by anti-Semitic evangelical preachers and pompous American Jewish spokespersons who managed to completely ignore the Palestinian case for East Jerusalem that President Trump himself claims can still be considered. Global TV broadcast all this on split screens that carried the Gaza drama of tear gas and death to near and far.

So this was a hasbara knockout not just because of Gaza. On Monday in Jerusalem, our hubris was on garish display.

Let’s think back for a minute to pre-1967 Israel. At a time when the entire Arab world wanted to throw Israel into the sea and no one would talk to us, Israel’s policy was to offer to talk to any Arab leader, without preconditions. Today that should be our openly stated policy toward Hamas (and toward Hezbollah and Iran, the only other militant Islamist holdouts in our neighborhood).

Of course they won’t reciprocate. Of course Abu Mazen will take offense. But the world will take notice. We’ll have, for the first time, the simplest strategy of all: let’s talk.

And let’s be generous in ways that defy convention. We should offer Hamas desalination and sewage recycling equipment and knowhow not merely as part of an international aid plan whose conditions Hamas rejects, but unilaterally and unconditionally. Park the equipment at the border where Gazans can see it. Invite Gazan laborers and critical medical cases into Israel even if some security risk is involved.

If Israel doesn’t start thinking strategically outside-the-box about Gaza and Hamas, next time around we’ll have a worse disaster on our doorstep. Two million Gazan Palestinians facing ecological and humanitarian disaster are desperate enough to do anything. Whether we deserve this or not—whether we should even be blamed—is simply not the point.