The stormy life of the “Roseanne” revival, plagued by controversies over star Roseanne Barr’s politics, outrageous statements, and penchant for out-there conspiracy theories, has come to an abrupt end. ABC has cancelled the top-rated show’s second season after Barr posted a shockingly racist tweet comparing former Barack Obama aide Valerie Jarrett to an offspring of The Muslim Brotherhood (to which the far-right rumor mill has long linked Jarrett) and “Planet of the Apes.” Jarret is black.

Barr later apologized, and blamed the sleep-inducing drug Ambien in a subsequent Tweet.

I apologize to Valerie Jarrett and to all Americans. I am truly sorry for making a bad joke about her politics and her looks. I should have known better. Forgive me-my joke was in bad taste.

But it was not the first time Barr has been the subject of controversy. A vocal supporter of Donald Trump, she has been at the center of the culture wars for some time—especially since the launch of the “Roseanne” reboot, in which her character shared the star’s politics and argued with her liberal sister.

Many progressives argued that the show, which had record ratings, normalized Trumpism and glossed over the bigotry rampant in the Trump fan base. (This is clearly their day to feel vindicated.) Meanwhile, some conservatives saw the success of the new “Roseanne” as a “message to liberals in Hollywood”: ignore the culturally conservative working class at your own peril.

So what are the lessons of Roseanne’s inglorious downfall now?

For one thing, everyone, or nearly everyone, agrees that odious speech should be ostracized and that sometimes, people should suffer severe social and professional penalties for expressions that deeply offends our collective sense of morality. It is telling that no mainstream figure anywhere on the political spectrum has come to Barr’s defense, while everyone from Bill O’Reilly to Tomi Lahren have condemned her (President Trump took the episode as an excuse to air his own grievance).

Roseanne Barr’s vicious personal attack on former Obama senior adviser Valerie Jarrett came out of nowhere and cost Ms. Barr and the entire staff of her program their jobs. @ABC/@Disney could not continue with the show without insulting millions of Americans.

While free speech advocates are often accused of wanting consequence-free offensive speech, what they generally want is for unacceptable speech to be defined as narrowly as possible so that provocative humor and controversial ideas are not declared “beyond the pale” and so that the outrage machine doesn’t go after innocuous words deemed to have bigoted implications.

Barr’s racist attack on Jarrett clearly crossed into beyond-the-pale territory. (It should also be noted that this is not the first time she has compared an African-American woman to an ape: five years ago, she tweeted an even more grotesque comment about another Obama aide, Susan Rice.) In this case, the outrage was well-deserved. It is also a reminder that a certain level of “political correctness” — the taboo on obvious bigotry — is a good, salutary thing and a mark of society’s moral progress.

And yet a cautionary note is in order: Just because provocative humor can cross the line of decency doesn’t validate those who want provocative humor to be more aggressively policed. A few months ago, Barr came under attack from journalist Kurt Eichenwald and other Twitter progressives for a photo in which she was dressed as Hitler, with a fake mustache and a Nazi uniform, standing in front of an oven and holding a baking sheet with partially burned gingerbread-man cookies. 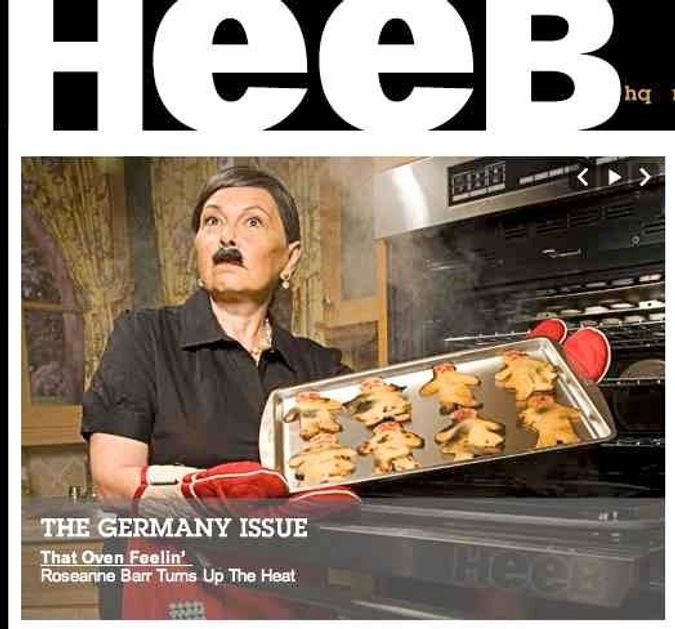 Barr is, of course, Jewish, and the photo appeared in 2009 in the now-defunct edgy Jewish magazine HEEB as part of an exploration of whether the taboo on Holocaust jokes still had power. When some people pointed this out in defense of Barr, Eichenwald fired back that everyone associated with the photo, including the magazine, “should be shut down, fired, and canceled.”

That’s a path to banning “The Producers” and “Blazing Saddles.” I thought Barr’s photo spread was a smart, darkly funny commentary on the tough issue of Nazism as humor material, as well as a Hitler joke in which a Jew has the last laugh; I still do.

For the right, a big lesson of the Barr fiasco, perfectly articulated by David French at National Review, is that embracing conspiracy cranks with bizarre views as allies or icons just because they “trigger” the left and hate the liberal elites is very likely to backfire. (That also applies to an ex-TV star who is not Roseanne.)

For the left, the lesson is that the vast majority of “political correctness” foes are not, as is often insinuated, simply using free speech as an excuse to defend bigotry. Vox writer Jane Coaston has noted that that contrary to some progressives’ expectations, conservatives and Trump supporters have, for the most part, not rushed to stand with Barr.

Meanwhile, some leftists have amused themselves by making up fictional headlines by New York Times opinion editor, “PC” opponent, and leftist bête noire Bari Weiss depicting Barr as a martyr for free speech, only to have it pointed out that Weiss has actually warned about Barr’s toxicity in the past. Talk about snatching defeat from the jaws of a culture-war victory.

Roseanne Barr is a brilliantly gifted comedienne and a deeply troubled woman. Over the years, she has championed dubious causes associated not only with the far right but with the cultural left (just a few years ago, she appeared on CNN to make wild claims of pro-rapist conspiracies during the headline-making rape trial in Steubenville, Ohio). She has also made plenty of jokes about men that would be seen as hate speech if they were not seen as “punching up.” On Tuesday, in addition to her racist tweet about Jarrett, Barr peddled an anti-Semitic tweet about George Soros being a Nazi collaborator.

Once the dust has settled, her artistic legacy will probably live on. But in the meantime, the collapse of her career should be a reckoning for those who have embraced her when her peculiar politics aligned with their own.