Stop Bringing Up Palestine When We Bring Up Anti-Semitism 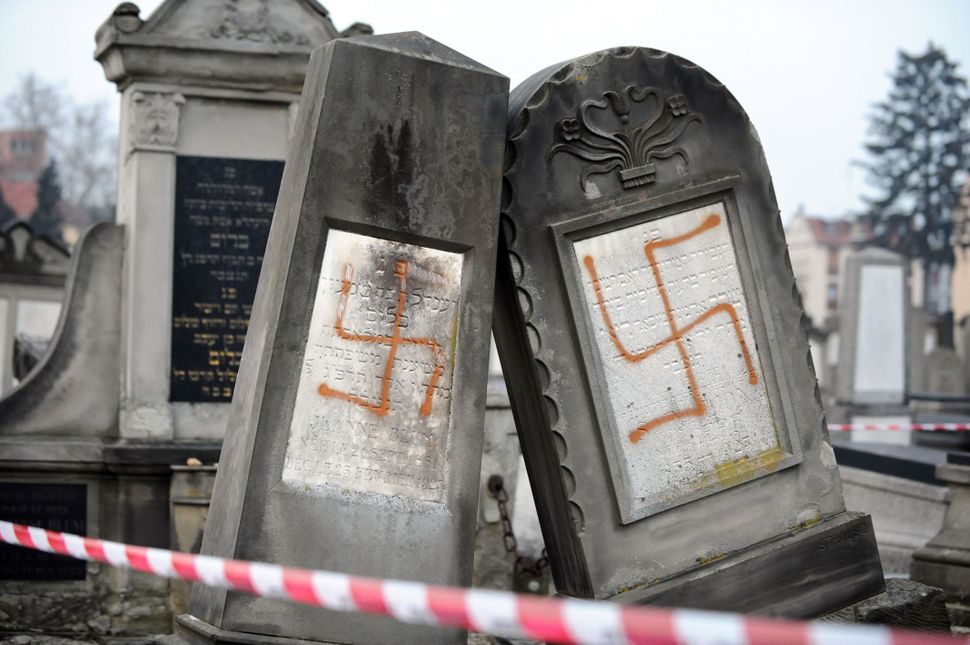 A few important and upsetting events took place in the past few weeks, events which should have nothing to do with one another.

On Friday, Israeli snipers shot and killed 21-year-old medic Razan al-Najjar in the Gaza Strip, as she tended a demonstrator who had been injured during the tenth week of the Great March of Return. Najjar was the 119th Gazan Palestinian killed since the beginning of the march, but she quickly became an icon of resistance to the brutal Israeli occupation. The death of a young woman who devoted her life to caring for the wounded puts the lie to claims by the Israel Defense Forces that everyone who has been shot is an immediate threat to Israeli civilians, and it reveals the cruelty and barbarism in the IDF’s stated policy to shoot any Gazan who approaches the border fence, even if she is just a medic trying to save lives. It’s no wonder that thousands of Palestinians attended Najjar’s funeral on Saturday.

Meanwhile, on May 27, in his first major public address since February, Louis Farrakhan of the Nation of Islam fulminated to his audience about “Satanic Jews who have infected the whole world with poison and deceit” and warned of how “the false Jew will lead you to filth and indecency.” Not content to slander Jews only, he also indulged in tropes of anti-blackness, claiming that President Obama was “under Jewish influence” when he endorsed the legalization of same-sex marriage. (Apparently for Farrakhan, President Obama was unable to come to this conclusion on his own.)

Then there the fact that supporters of a neo-Nazi running as a Republican for California Senator are running robocalls calling incumbent Senator Dianne Feinstein a “nation-wrecking Jew.” Swastikas and neo-Nazi slogans are appearing on headstones at cemeteries and synagogues across the world. The Auschwitz-Birkenau Museum has been struggling with a wave of anti-Semitic attacks, inspired by Poland’s new law criminalizing all statements accusing Poles of being complicit in the murders of Jews during the Shoah. (This despite the fact that there was, studies show, a lot of Polish complicity in the murders of Jews.) And in some European countries, as many as one in ten citizens say they would not accept Jews as neighbors.

On the surface, these should be separate stories. The IDF behaved brutally and immorally in shooting an unarmed young medic, and the fact that they did should cause us all to reassess their stated policy to use lethal force to prevent any Gazan from getting too close to the border fence. No moral human being, Jewish or otherwise, should defend the shooting of a young medical professional who was just trying to save lives. And Jews have every right to feel nervous about rising anti-Semitism in the United States and Europe, trends which have many Jews feeling targeted and even reassessing their safety in diaspora. These are separate stories.

Why, then, are these issues so often conflated?

Every Jew who has ever posted about anti-Semitism on social media has a story of being told that their concerns are selfish or illegitimate, because of the greater suffering of the Palestinian people. Just this past weekend, prominent social justice activist Shaun King stated that he could not denounce Farrakhan’s vile anti-Semitism, because of the IDF shooting of Razan al-Najjar – even though Farrakhan’s screed was directed in particular at Jews in the United States, who are completely different Jews from the ones who shot Najjar.

If today you’re more bothered by a sermon from Louis Farrakhan than this, I’m deeply concerned by how differently we see the world. pic.twitter.com/pK9wjVc7er

Apparently for some social justice activists, justice for some groups comes before justice for others. And in many formerly Communist Eastern European countries, there’s a long history of using the ostensibly pro-Palestine rhetoric of “anti-Zionist campaigns” to mask what are really just campaigns to purge Jews from public life. On the other side of the aisle, prominent Zionist activists are making absurd logical leaps to allegations of anti-Semitism against anyone who has spoken up against the IDF’s shootings of unarmed civilians. Claims that even so much as acknowledging the human scale of the deaths in Gaza is automatically an anti-Semitic act make a mockery of the actual rise in anti-Semitism across the world.

So today, I’d like to make a modest proposal for all sides. Jews, stop immediately retreating to accusations of anti-Semitism whenever a non-Jew expresses solidarity with Palestine or condemns Israeli actions such as the IDF killing of Razan al-Najjar. Doing so is anti-Palestinian, it refuses to engage with the real criticism of the IDF’s policies of engagement, and it minimizes actual anti-Semitism in a way that makes it harder to fight. Any human being who can read about the shooting of an unarmed medic who volunteered to save lives and not be moved to condemn it has what Deuteronomy would call a hardened heart. It’s not anti-Semitic to point that out. It isn’t always about us.

And non-Jews, stop immediately bringing up Palestine whenever a non-Israeli Jew expresses fears or concerns about rising anti-Semitism in our own countries. It’s anti-Semitic to hold non-Israeli Jews responsible for the actions of a country where we don’t live, just because we might share an ethno-religious identity with many of those who do live there. (Indeed, no less an authority than US ambassador to Israel David Friedman is on record stating that evangelical Christians are stronger backers of Israel’s policies than most American Jews, so if you’re going to hold one American religious group responsible for Israeli policies, it doesn’t make sense to start with American Jews.) Honest condemnations of actual anti-Semitism such as that from Louis Farrakhan will make your criticisms of Israel more convincing, not less, as it will show that you aren’t motivated by hatred of the Jews. And if you want Jews to stop identifying so strongly with the state of Israel, you should be especially invested in making us feel safe in diaspora, at a time when many of us are feeling more threatened than we have in decades.

Joel Swanson is a Ph.D. student in the History of Judaism at the University of Chicago. Find him on Twitter at @jh_swanson.

Stop Bringing Up Palestine When We Bring Up Anti-Semitism