Jewish Feminists Are Struggling With The Left. It’s Not The First Time. 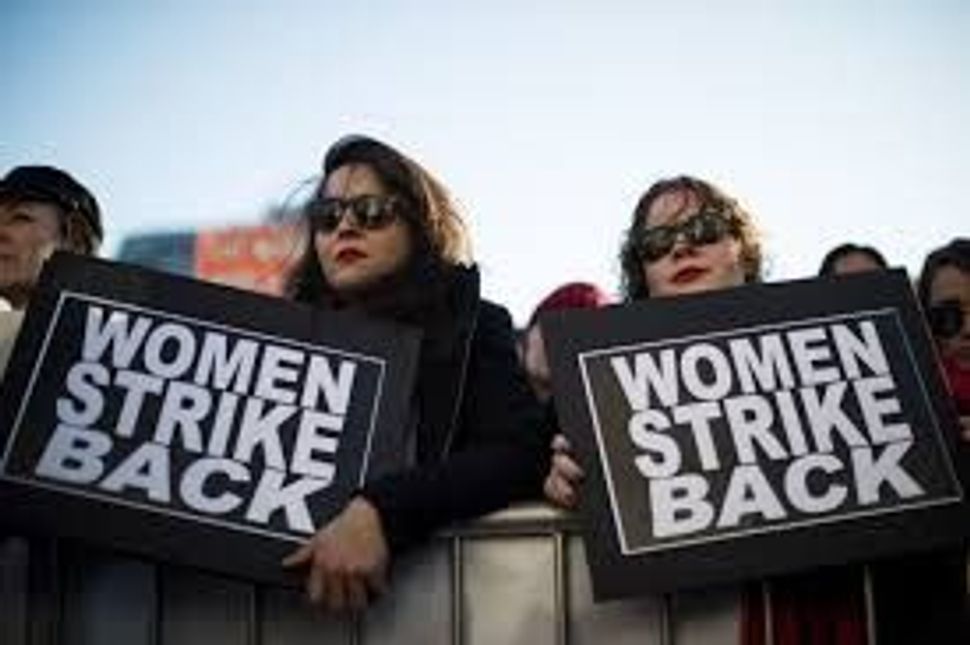 Their hair was mostly gray. Some had trouble walking. Their bodies reflected the passage of many years.

Nonetheless, the gathering featuring about a dozen women at the American Jewish Historical Society last week had the buzz of a lively camp reunion laced with serious historical significance. The guests of honor were radical Jewish feminists in their time, whose writings and activism had a lasting impact well beyond the fringe of American society. And their stories were finally being told.

They were brought together to celebrate the launch of a new book aptly entitled “Jewish Radical Feminism: Voices From the Women’s Liberation Movement” by Joyce Antler, professor emeritus at Brandeis University, an interpretive history of about forty women beginning in the tumultuous year of 1967.

Some of the women who attended the small reception before the public program — including Letty Cottin Pogrebin, Blu Greenberg, Martha Ackelsberg and Judith Plaskow — are still active writers, teachers and mentors, whose works I deeply admire. As their photos from the 1960s and 1970s flashed on a screen, you could see how very long they have been at it, unrelenting in their own fashion.

I am fortunate to be acquainted with all four of those women, and know how much their Judaism(s) matters to them. But at the height of the movement, many radical feminists struggled with whether and how to identify as Jews, Antler said.

Who knew that eight of the nine women in the original “Our Bodies, Ourselves” collective were Jewish? Like many others, they were informed by the Jewish sense of being outsiders, willing to challenge authority and cognizant of a history of oppression. But they were also uncomfortable with expressing a Judaism that was still patriarchal and unwelcoming — at the same time they were often shunned and ridiculed by men on the radical left which, of course, also included an outsized number of Jews.

So the challenge of “showing up” as one’s full self in politics is not new. It echoes today as one of the original leaders of the Women’s March continues to repeat awful and indefensible statements about Israel, leaving many Jewish feminists struggling with how to support the mission of that movement and stay true to themselves as Jews.

As my colleague Aiden Pink reported recently, these tensions led some Women’s March chapters to go so far as to break with the original movement.

Is history a guide here? I’m not sure. It’s reassuring to learn how these iconic women navigated their own struggles with multiple identities in their own time. And to recognize the tremendous contributions they made, even from outside the mainstream.

After all, “Our Bodies, Ourselves” may have been radical in its day, but it’s now in its ninth edition and has sold 24 million copies.

Yet it’s also heartbreaking to learn that many of the Jewish women involved in this groundbreaking exercise were not fully there as Jews. As Antler said that night, “Silence is not a good strategy in history. How do you leave a legacy if you’re not speaking out and identifying yourself?”

What I’ve been writing. My essay on my journey to England with my sister to explore our mother’s roots prompted a number of touching emails from readers. “Though Indian and non-Jewish myself, I appreciate the informational content with its undercurrent of deep sentiment,” wrote one woman.

Others shared with me stories of their own connections with Leeds, in Yorkshire, where my family goes back generations. It’s a reminder that the quest for our roots is a powerful one, whoever we are.

What else I’ve been saying. Bill Clinton’s name seems to be in the air. This morning, I returned to The Brian Lehrer Show on WNYC, the local public radio station, to discuss Clinton’s legacy, and in particular, the Monica Lewinsky scandal and his subsequent impeachment. Back in November, I reminded readers that some feminists did, indeed, believe that Clinton should resign — in my case, when I was editorial page editor of The Philadelphia Inquirer, because he lied under oath.

The conversation this morning examined that controversy in light of the cultural changes — and consequential backlash — coursing through American society in 1998. If you missed it, tune in.

Meantime, the Boston Globe raised the issue of Clinton’s behavior because he is scheduled to speak on Wednesday at a ceremony marking the 50th anniversary of Robert F. Kennedy’s assassination, to be held at Arlington National Cemetery. Reporter Annie Linskey asked me how he should be judged now, and I replied that I thought it was unfair to measure someone’s past behavior solely by today’s norms.

Still, I told her, what’s missing is t’shuvah, repentance. “He’s not really done a public accounting of this,” I said. “I think if he had at some point along the way, I think America would forgive him.”

Judging from the interview the former president gave on NBC this morning, his repentance hasn’t yet begun.

Looking forward. This Sunday, June 10, Sam Norich, the president of the Forward Association, is leading a walking tour of the Lower East Side, following in the footsteps of our immigrant ancestors. He’ll visit the Eldridge Street Synagogue and Orchard and Essex Streets, pay homage to the Forward building on East Broadway and — because you have to eat! — stop for brunch at the Henry Street Settlement.

I’ve taken a tour with Sam, and can assure you that he’s a brilliant historian and storyteller. If you’re interested in the few remaining spaces, contact Roberta Caplan at 212.453.9446 or caplan@forward.com

And if you can’t make the tour because you live in or around Chicago, well then, head over to the Greater Chicago Jewish Festival on Sunday at the Cook County Forest Preserve. The Forward is a proud co-sponsor. You may even be able to pick up some of our famous Forward swag….

Jewish Feminists Are Struggling With The Left. It’s Not The First Time.