Why Israelis Won’t Apologize For Killing Of Gaza Nurse 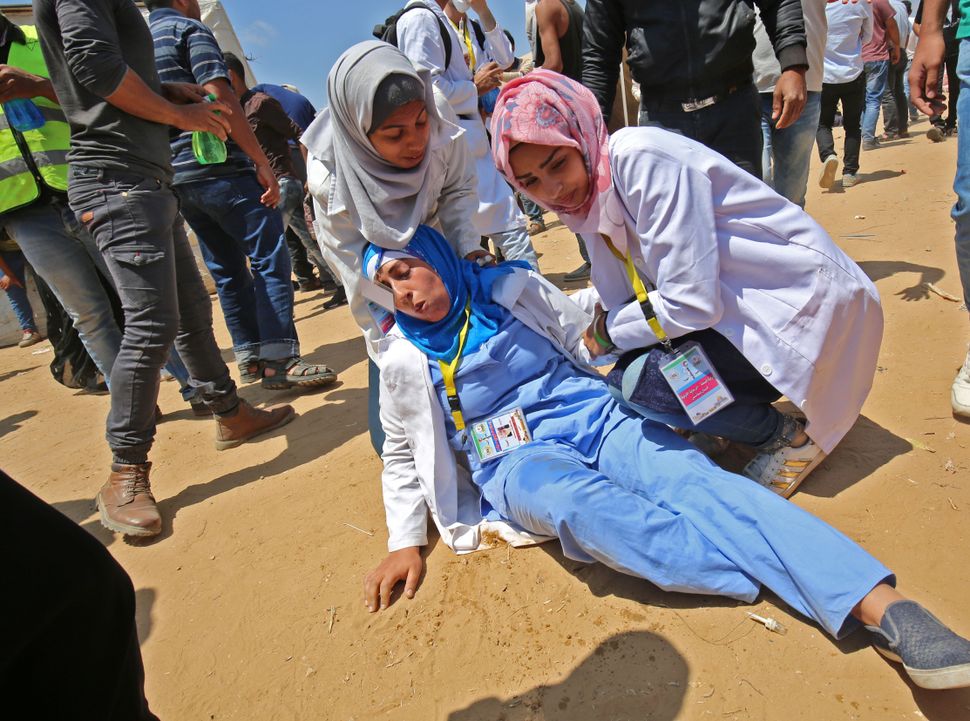 When Razan al-Najjar, 21, a medical volunteer in Gaza, was shot and killed on June 2, Palestinians and media commentators were quick to accuse Israeli Defense Forces snipers of deliberately shooting her. After all, they claimed, the IDF had already killed more than 100 “innocent civilians” and targeted children, members of the press, and health workers.

Al-Najjar’s death was terribly tragic. The IDF’s preliminary investigation reported that soldiers did not fire directly at her. Further investigation is ongoing, presumably to determine if there was a ricochet or if she was behind the intended target.

I believe most Israelis agree with me that her death was appalling, but there is little feeling of contrition in Israel. Why? Because most Israelis know that her shooting was not deliberate.

We simply don’t do things like that. If a wanton and cruel — and rare — act of murder of Arabs by an Israeli takes place (Baruch Goldstein’s 1994 massacre and the 2014 burning murder of Mohammed Abu Khdeir come to mind), Israelis are shocked and demand justice.

Why are the shootings of “demonstrators” in Gaza different?

Because the current Hamas offensive is classic asymmetrical warfare, presented in the media as F-35 jets and Merkava tanks against slingshots and kites. The Israeli public knows better: not only are those rocks and kites lethal, but they are just one tactic in Hamas’ perilous arsenal of attack tunnels, rockets, fence-breaching teams, drones, RPGs, mortars, and naval commandos, all encouraged, trained, financed, and supplied by a genocidal Iran.

Israelis have learned the hard way that the terrorist fighters and volunteers are disguised as civilians (some 85% of those killed were affiliated with Hamas and the Islamic Jihad). In this war, the enemy sends to the front boys, women, and fighters sometimes disguised as press and aid workers traveling in ambulances that ferry fighters and bombs.

Israelis won’t beat their breasts with guilt, especially if the United Nations and CNN are already beating them over the head for acts we didn’t do.

We’ve been there so many times: Palestinian official Saeb Erekat told CNN that 500 Palestinians were massacred in Jenin in 2002’s Operation Defensive Shield. (50 Palestinians, mostly fighters, and 23 IDF soldiers were killed.) Suha Arafat claimed to Hillary Clinton in 1999 that Israel used “poison gas” against Palestinians. Twelve-year-old Muhammad al-Durrah was allegedly gunned down in Gaza by Israeli soldiers in 2000, but considerable evidence to the contrary produced considerable doubt in the minds of many in Israel. Add to the list the Mavi Marmara flotilla incident in 2010 when the IDF was blamed for killing 10 Turkish civilians who, it transpired, were not so innocent. Ten Israeli soldiers were wounded, one seriously. Israelis also remember the 2009 UN “Goldstone Report” on the Gaza War that accused Israel of “intentionally targeting Gaza civilians.” The report was so biased, corrupt, and unjust that Justice Richard Goldstone himself retracted the claims.

In Israel, we have met the enemy, and it ain’t us, to paraphrase the great philosopher, Pogo.

We know that because the IDF is us, our sons and daughters, our husbands in reserves. We know that because the front is only a few miles away, not thousands of miles away in Afghanistan or Iraq, not in the Abu Ghraib prison or Raqqa. If anything is amiss or orders seem illegal, our soldiers pick up the phone and call us or Carmella Menashe, the veteran army reporter for Israel radio. Misdeeds, brutality, or illegal orders are not covered up; in this talkative society, they can’t be.

In Israel, investigations take place. Criminal acts are prosecuted. Due process is carried out, sometimes not as quickly as we would like. There is no rush to judgment despite the insatiable demands of social media and cable news.

At the same time, we have met the enemy, and he is cruel. Israelis and the soldiers protecting them witnessed over the years savage mobs dismembering two reservists with their bare hands, buses and restaurants exploding, children stabbed in their bedrooms, and rabbis butchered while at prayer. We’re sad over the deaths on the other side of the Gaza border, but we’re not overly apologetic.

We’re angered when the Palestinians name parks and schools to honor their “heroes” who led terrorist attacks against Israeli civilians. We shake our heads when we see Palestinian children extolling martyrdom. And the entire story of Palestinian budgets to “pay to slay” Israelis infuriates us.

What makes us throw up our hands in exasperation, though, is the great disappointment at the myopia and hypocrisy of the West, the United Nations, the press, and probably worst of all, some in the Jewish community who, rather than understanding us, deign to see themselves as Israel’s morality juries and judges.

I cannot speak for all Israelis, but 10 minutes after the Palestinians decide one day to make peace with us, we will rush to assist them with jobs, water, electricity, agriculture, waste management, economic development, housing, and healthcare. Because those are the things that we do.

Lenny Ben-David served as a senior diplomat in Washington. He is the author of American Interests in the Holy Land Revealed in Early Photographs. He is the Director of Publications at a Jerusalem think tank.

Why Israelis Won’t Apologize For Killing Of Gaza Nurse