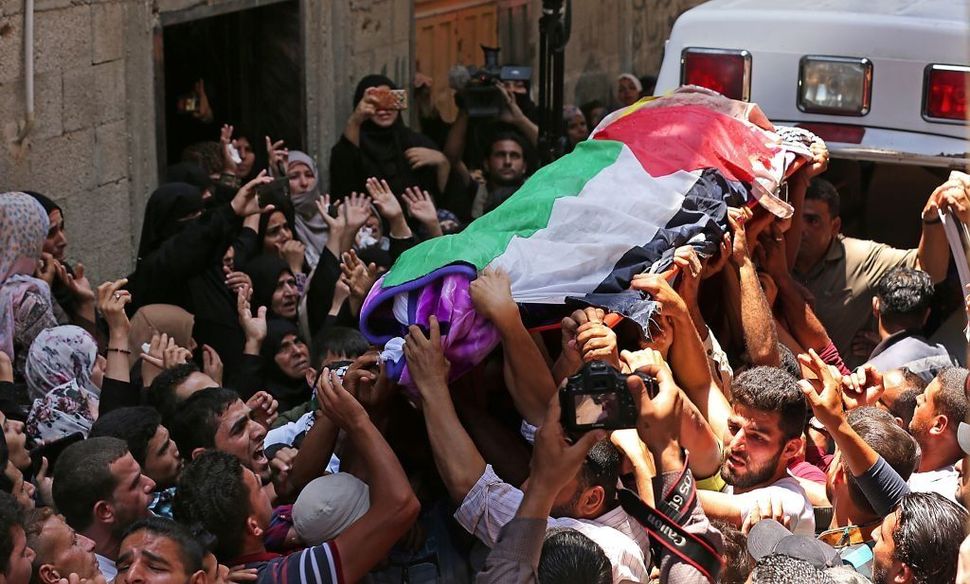 Palestinian mourners carry the body of 21 years old Razan al-Najjar during her funeral after she was shot dead by Israeli soldiers, in Khan Yunis on June 2, 2018. – A young Palestinian woman was shot dead by Israeli soldiers near the Gaza border fence on June 1, in another day of protests and violence, Palestinian medical sources said. Razan al-Najjar, 21, was shot near Khan Yunis in the south of the territory, health ministry spokesman Ashraf al-Qudra said, bringing the toll of Gazans killed by Israeli fire since the end of March to 123. Image by Getty Images

There is nothing more despicable than blaming victims for their own suffering. Unfortunately, we Palestinians know that this is inevitably the narrative Israel will spin.

14-year-old Mohammed Ayoub, double-amputee Ibrahim Abu Thuriya, unarmed journalist Yasser Murtaja, and the brave angel of mercy, Razan al-Najjar, were not shot dead because they wanted to be. They were killed because they were Palestinians born on the wrong side of the fence.

And yet, none of them has escaped an Israeli narrative bent on blaming them for their own deaths.

The racist, dehumanizing and hideous term “Pallywood” has been coined to imply that the entire Palestinian population are consistently conniving and contriving staged fictions of their brutal treatment to defame Israel. The absurdity of such horrendous term dishonors only its authors and advocates.

But this week confirmed what we Palestinians have long known: that it’s Israel that engages in fictions, particularly when it comes to dead Palestinians. According to shamelessly doctored footage released by the IDF on Twitter, Razan was a “human shield,” presumably one who intended to run at live-bullets and catch one with her chest to embarrass Israel.

She herself says in the video, “I’m a human shield,” presumably admitting that she is a Hamas tool. She says this after committing a second “crime” according to the video — taking an Israeli smoke grenade from some young boys who were recklessly playing with it, shot down at the protesters no doubt IDF soldiers, and tossing it two meters away in an empty field. The dramatic background music tries to make Razan look like a combatant, but it stops, along with the entire video, at the very moment she was about to explain what sort of “human shield” she was.

As she explains in the original video, she wants to be “a rescuing human shield to protect and save the wounded at the frontlines.” Her ironic use of the word “human shield” was perhaps intended to take a dehumanizing term widely used by the IDF to justify the killing and maiming of unarmed protesters, and make it into something so powerful and touching that you cannot ignore.

The IDF seems to have purposefully cut the interview clip after two seconds in order to falsify Razan’s words. If they had lengthened the clip by just one second more, one word more, their whole narrative would have unraveled.

This kind of doctored video, purposely edited to portray a humanitarian worker as an enemy combatant who deserved to die, is not only despicable, and not only does it blame the victim of murder for her own killing, but it’s exactly what we Palestinians are always accused of.

The Israeli army said it would conduct an inquiry into Razan’s death, but as usual, they found no fault of their own, once again avoiding responsibility for the death of an unarmed non-combatant, in an act the UN Humanitarian Coordinator described as “particularly reprehensible.” Then they claimed the killing was an accident. And finally, they smeared the victim in order to justify her death.

But this is par for the course. In Mohammed Tamimi’s case, eyewitnesses confirmed that his head was shattered by Israeli soldier’s bullet, but according to the IDF, “he fell off his bike.” It wasn’t us, this and many other IDF reports conclude. The IDF has no idea how a live-bullet landed in the forehead of double-amputee protester Ibrahim Abu Thuriya. “No live fire was aimed at Abu Thuraya. It is impossible to determine whether Abu Thuraya was injured as a result of riot dispersal means, or what caused his death,” the IDF said in a statement.

Another racist term coined to blame Ibrahim for his own death was “self-inflicted suffering.” The entire Palestinian population is perceived as masochists who find joy in getting killed, maimed and crippled by the IDF, and the “moral” IDF is there only to make their wishes come true without a second thought.

Columnist Ben-Dror Yemini apparently managed to dig into late Ibrahim’s heart and concluded that his death is entirely his fault, because he was “an agitator who wanted to die a martyr.” He overlooks the fact that if Ibrahim contemplated death as a relief for once in his heartbreaking life, it was mainly because the IDF stole both of his legs and Israel’s blockade turned his life into unbearable hell, where he spent his golden years crawling on the floors and begging for bare-bone subsistence.

If the IDF doesn’t blame the Palestinian, they claim that the death was an accident, as they did with Razan. Wishful thinking suggests that the most moral army would never do such thing on purpose.

The IDF, instead of investigating actual incidents, seems to spend disproportionate amount of time trying to prove an alleged affiliation between the “accidentally targeted” victims and dehumanizing categories that justify their killing.

This ought to be easy, because in the words of Israel’s Defense Minister Avigdor Lieberman, “there are no innocents in Gaza.” Per Lieberman, everyone in Gaza must have encountered a Hamas member for once in their life; in the streets, the shops or the mosques. That alone makes the entire population liable for attempted genocide.

Slain journalist Yassier Murtaja had connections in Hamas by virtue of his job as a journalist, and he allegedly flew a filming drone to document the protest that hovered above the soldiers’ heads, according to Defense Minister Libierman — a drone that the IDF said to be non-existent. So instead of shooting the imaginary drone, the sniper shot Yasser himself “accidentally.”

Razan succeeded in death as in life in telling her story. In a conservative society, Razan was applauded and praised as a national hero, a saint whose funeral was attended by tens of thousands of people, and whose posters are now all over the city. She made history with her dedication.

But if asked for her own opinion, she would have never wanted to die young, or to see any of the young protesters shot dead.

The IDF, for once in its history, should own their mistakes and crimes and learn from them. IDF soldiers should never shoot children, journalists or medics under any circumstances, and if such incidents happen “accidently” again (God forbid), the least the IDF could do is to not dehumanize and desecrate the dead with “Israeliwood” fiction. For shame.