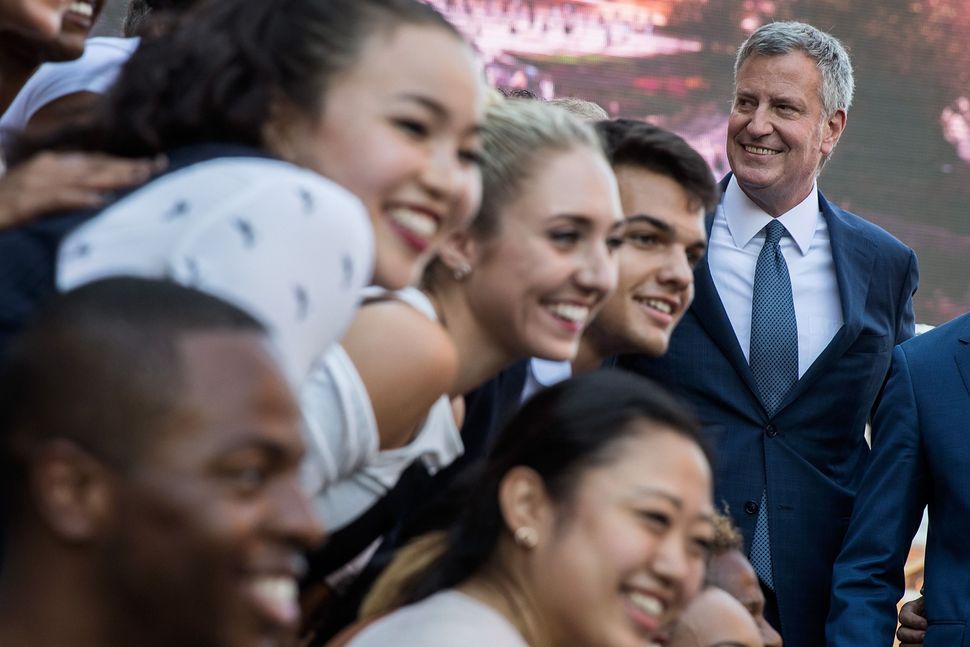 On February 3, 1964, nearly half a million of New York City’s black and Puerto Rican children were kept home from school. The boycott was part of a demand for the desegregation of New York City’s public schools. It was the largest civil rights action in United States history, and a plan was drafted to integrate the schools.

The activists were jubilant. And yet, in 2014, a UCLA study found that New York City has some of the most segregated schools in the country. That’s because the plan never happened.

White parents were not having it. On the cold snowy day of March 12th, 15,000 of them, mostly mothers, marched on City Hall to oppose the plan. They called themselves “Parents and Taxpayers” — never mind that African Americans and Puerto Ricans were also parents and taxpayers. They made the national news. Officials agreed that 15,000 white mothers simply could not be ignored, and the plan to desegregate the schools on a large scale quietly died.

Today, the New York City Public School system is the largest in the nation, serving 1.1 million students in over 1,800 schools. It remains shockingly segregated.

And if you know this story, you can hear its echoes in the shrill opposition to Mayor Bill de Blasio’s efforts to diversify New York City’s specialized high schools.

New York City’s public schools have a strictly tiered system, with nine specialized high schools — including Stuyvesant High School, The Bronx High School of Science, and Brooklyn Technological High School — at the top and the rest in descending order. Students’ entrance to the nine elite schools depends entirely on a test called the Specialized High School Admissions Test or SHSAT.

The SHSAT has notoriously racialized results, such that of the 900 incoming freshmen to Stuyvesant, only 20 are African American. Meanwhile, though Asians make up just 12% of the City’s population, they make up 75% of Stuyvesant’s students.

To diversify NYC’s top public schools, Mayor Bill de Blasio has come up with a plan. Instead of relying on the SHSAT, students’ class rank in their middle school and their scores on standardized state tests would determine admission to the highly sought after specialized high schools. If the plan is implemented, it should raise the portion of black and Latino students at specialized high schools to 45%.

And yet, it has everyone crying racism.

Members of the Asian community insist that taking away the SHSAT, which they view as a “fair” and “objective” measure of readiness at which Asian students tend to excel, is a ploy to make the schools less Asian.

Meanwhile, white parents claim the mayor is favoring black and Latino students, who currently represent only 10% of the population in these top schools, when he should really be the mayor for all people.

Still others argue it’s the black and Latino students who will actually suffer, since the altered admissions criteria will set them up for failure in the massively competitive schools.

I think the changes are well intentioned and likely to have the beneficial outcome of creating greater diversity in the city’s top schools.

But the truth is, specialized high schools do not serve the “needs” of the “gifted and talented.” Those upset about the new test may have a grievance, but their goal is not educational equity.

But, you might ask, don’t these schools give opportunities to regular, hard-working folks, even poor immigrants, who lack the money to send their kids to $50,000 a year private schools?

Absolutely — but it gives this opportunity to very few of them.

I and most of my friends fit this profile. We are the children of immigrants who worked extremely hard and instilled in us the burning need to master tests like the SHSAT so we could assimilate with honors. We became National Merit Finalists and studied alongside far wealthier peers at elite universities. Through a lot of hard work, a good helping of privilege, and some luck as well, we joined the ranks of winners in a system of winners and losers.

Now I teach the students who are permanently excluded from winning the educational lottery, high school students at Jill Chaifetz Transfer School. They’ve persevered through ravages of poverty unimaginable to most middle-class strivers, and no matter how brilliant, they probably placed in the bottom 90% of their middle schools due to personal tragedies, abuse, unstable housing, hunger, and other factors.

The question we should be asking is how to make the whole public school system live up to its promise of education for all. And as long as we keep wringing our hands about who deserves a spot among the elite, we evade the true question of educational equity.

When we fight over who deserves a highly coveted spot in a top tier school, we are tacitly accepting that education is not a right, but a competition. You do not want to send your kids to a specialized high school because it is uniquely equipped to meet their learning needs; you do it because it’s a top school and you want them on top.

This selfishness is understandable. On one Facebook thread discussing de Blasio’s other contested plan, to integrate middle schools in district 199, a mother wrote, “I understand social justice and all that, but if this meant MY kid didn’t get a spot in the school I wanted, I would be pissed!”

I wish everyone in this debate were as honest in admitting that placing your kid among winners trumps any vague notions of fairness. Everyone is content with the status quo in which we assume some schools fail, are starved of resources, are inadequate, as long as you can guarantee a spot at one of the good ones for your own child.

The very existence of nine high schools out of roughly a thousand that provide an elite education, whose students are recruited by the most prestigious private colleges, is an emblem of our commitment to educational inequality.

The words “elite public school” are an oxymoron if you believe that public education is for the entire public.

DeBlasio’s proposals, therefore, are a bandaid on a bullet wound. I am glad of any plan that makes more spaces at the top for black and brown folks, who have been excluded too long. But what about the bottom that remains excluded?

Believe me, I have students that could dance a LaGuardia grad under the table. They are gifted and talented and have more grit than 40 TED talks could cover.

Is there a reason why students at Stuyvesant High School have three concert bands, a beginning band, a jazz band, three string orchestras and two choruses, while mine don’t have a single music teacher?

Aren’t both schools funded by tax payers, and don’t my students pay taxes, too, when they work multiple jobs to help their families?

Any talk of educational equity must start with the premise that every child deserves an excellent education, not just a chance at one if they win the standardized testing Hunger Games.

If you’re mad there are fewer spots at the top for your own kids than you expected, say that, but do not say it in the name of fairness.

Helen Leshinsky is a high school English teacher in the Bronx.