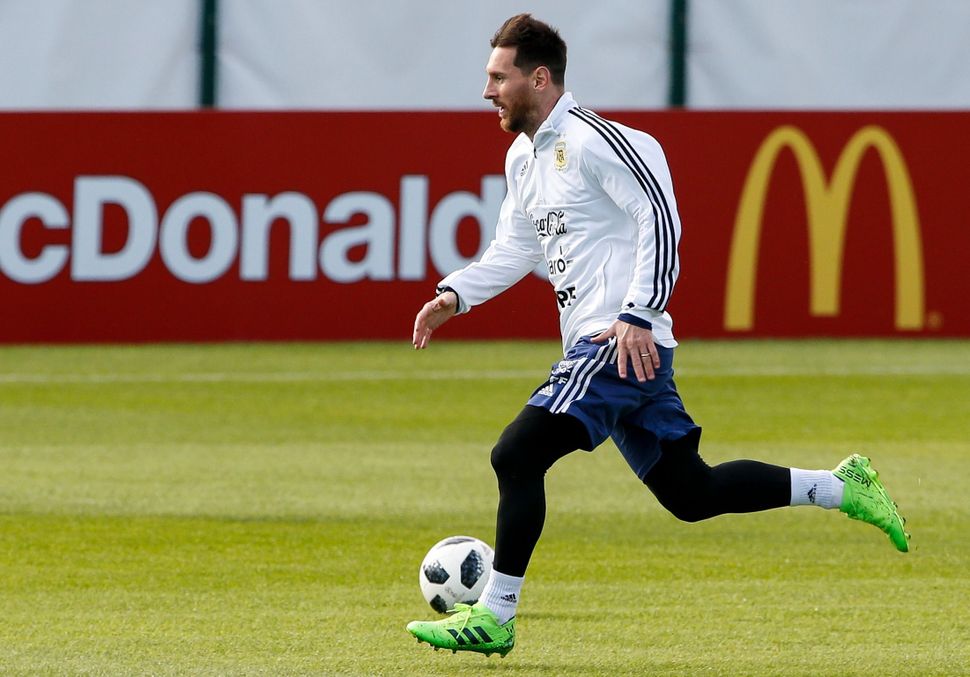 Israeli soccer fans were all set to haul out blue-and-white flags again this past weekend. The display of Argentina’s official colors would have celebrated the arrival of that country’s national team and its captain — Europe’s leading scorer, Lionel Messi — for a match against Israel’s all-star squad.

But the much-anticipated game was cancelled at the last second and, instead, Israel is awash in recriminations over who is to blame. State Comptroller Joseph Shapira is already on the case. Expect the BDS bogeyman to loom large in Shapira’s investigation.

Now, I’m the first person to admit that Israel has a genuine, insidious problem with an organized and well-funded campaign to undermine its legitimate rights. That doesn’t mean that all critics of Israeli policy are anti-Semites, but it does mean that there is a sophisticated cohort feeding on ignorance about Israel to leverage their malicious designs for the Jewish state and People. Fortunately, their calls to boycott and sanction Israel have had only limited impact to date.

One ironic byproduct of their efforts that Shapira might want to consider, however, is the license they’ve afforded some quarters of the Israeli government to act imprudently. The Messi incident is particularly illuminating here as evidence of BDS being pressed into the service of self-destructive political machinations.

Israel’s culture and sports minister, Miri Regev, convened a press conference on Wednesday to assert that the South American footballers were staying home because of terrorist threats to their safety, going so far as to invoke the massacre of Israeli athletes at the 1972 Munich Olympics. Her claim smacks of disingenuousness – not least of which because the graphic backdrop for her statement was a photo montage of BDS-inspired posters branding Israel an apartheid state.

It’s understandable that she would want to deflect guilt toward the Hamas thugs for whom no civilized person has a kind word. But her BDS overlay was unmistakable, intended as a potent magnet for Israeli outrage over the cancellation.

Of course, it’s entirely true that a concerted attempt was waged to block the Argentine players from coming to Israel. Its chances of success were lame though. President Mauricio Macri in Buenos Aires is a close friend of Israel. And FIFA, soccer’s international governing body, firmly resisted a 2015 Palestinian bid to have Israel suspended from the sport; Israel (ranked an unimpressive 93rd) continues unabated to host and be hosted by competing clubs.

BDS in this case was actually little more than a fall guy, a red herring deployed to obscure the role of Regev’s unabashed politicization of the event. Taking to the media to pronounce that Messi would “kiss the Kotel” and that his visit was a hasbara coup, Regev trained the spotlight on politics instead of sports, as she got into public arguments over which politicians would shake Messi’s hand and where. Her insistence that the planned soccer game was somehow part of Israel’s 70th anniversary festivities – also under her ministerial brief – transformed the Argentines into unwilling extras in a political drama.

That overreach became crystal clear when Jerusalem was injected into the mix. Not content with the venue for the match – Ofer Stadium in Haifa – Israeli political figures intervened to have it moved to the capital’s (smaller) Teddy Stadium. But the spirit of Trump’s embassy relocation turned out to be a bridge too far for Argentina. According to its foreign minister, Jorge Faurie, the cancellation of the game cannot be detached from the “noise” surrounding its transfer to Jerusalem. (Regev and Prime Minister Benjamin Netanyahu are now accusing each other of responsibility for the Jerusalem stunt.)

Israel and its friends make the valid argument that culture must not be held hostage to politics, and that politically-motivated discrimination against Israeli consumers is unfair. In fact, artists play an important role in promoting dialogue; when they bypass Israel, they forfeit a genuine opportunity to advance the cause of reconciliation. It is beyond absurd that members of the Israeli government should now be the ones infecting the arts with a political virus.

The indirect harm caused to Israel by the BDS challenge has a second component as well. Combating the coordinated assault of these Israel detractors has necessitated welcome cooperation between various segments of the pro-Israel community. But a poorly kept secret is that some agencies have overblown the scope of the threat for the sake of building personal fiefdoms. In so doing, they do a disservice to their ostensible cause by providing ballast for a movement that thrives on this free publicity.

Politics is a liability in this context as well. Israel’s government is pouring an abundance of resources into this arena, but seems to not always grasp its complexity. Reports of Israeli funds being proffered to scale the anti-BDS activities of foreign Jewish organizations disclose a fundamental misunderstanding of the Israel-Diaspora relationship. If the integrity of these Jewish communities outside Israel is compromised, Israel will also be hurt dearly.

There is a Hebrew adage which maintains that if you do something and don’t publicize it, it’s as if you never did anything at all. This is doubly correct for politicians, whose careers depend upon public perceptions of their effectiveness. But political futures are not always aligned with the general good. One case in point was a 2017 delegation of NFL players to Israel: when two Israeli ministers announced that the trip’s purpose was to enlist the group as “good will ambassadors” against BDS, seven of 11 participants promptly dropped out.

In an article that appeared two months ago in Foreign Affairs, I argued that Israel needs to “better insulate policy from politics.” This is true particularly when it comes to BDS, a philosophy with little traction that should not be resuscitated by reckless political shenanigans.

Learning nothing from the Messi fiasco, Miri Regev is back on the rampage, decreeing that Israel should refuse to host next year’s Eurovision, a premiere international showcase, if its organizers reject Jerusalem as the venue for the song contest. But this tendency to politicize the apolitical will only result in empowering a hobbled BDS crusade.

Israelis should recognize that their country will keep playing into enemy hands, and scoring on its own goal, until their untethered politicians are shown a red card.

Shalom Lipner is nonresident senior fellow at the Center for Middle East Policy at the Brookings Institution. From 1990 to 2016, he served seven consecutive premiers at the Prime Minister’s Office in Jerusalem. Follow him on Twitter @ShalomLipner

Shalom Lipner is a nonresident senior fellow at the Center for Middle East Policy at the Brookings Institution. From 1990 to 2016, he served seven consecutive premiers at the Prime Minister’s Office in Jerusalem. Find him on Twitter @ShalomLipner.