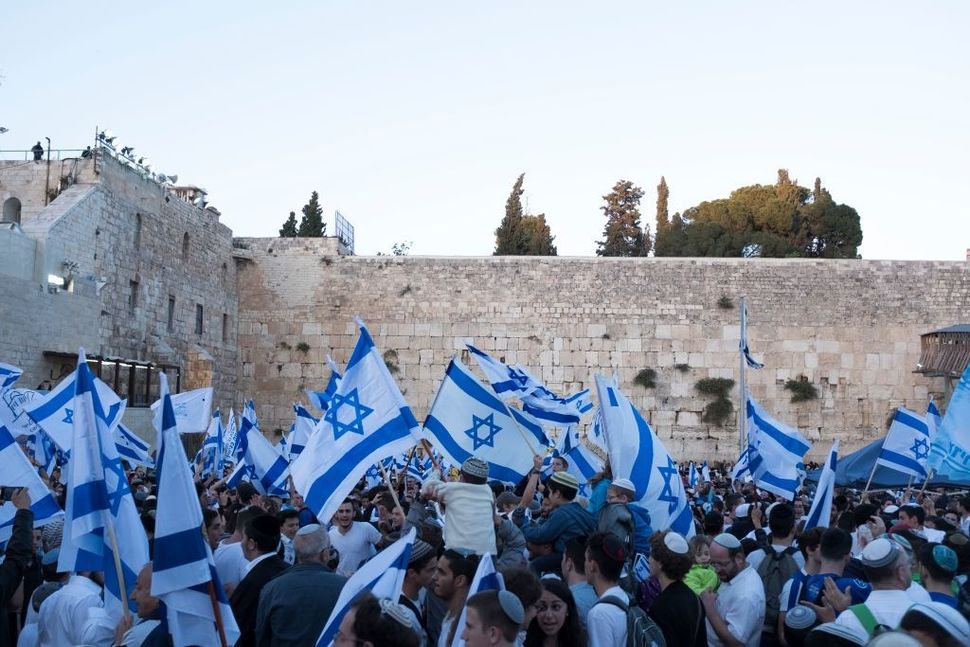 JERUSALEM, ISRAEL - MAY 13: Israelis wave their national flags during a march at the Western Wall on May 13, 2018 in Jerusalem, Israel. (Photo by Lior Mizrahi/Getty Images) Image by Getty Images

The American Jewish Committee’s recent survey has already sparked considerable debate over the future of the Jewish people — indeed, whether there even is a single Jewish people. Most concerning to many is the finding that American Jews and Israeli Jews have diverged to the point that while a majority of both groups see the other as family in one form or another, they are content to live within their own geographic-political spaces, separate from one another.

Rather than separation being a source of angst, though, it should be recognized for what it is: the widespread acceptance of conditions that have been in place since the Romans broke Jewish sovereignty around 70 C.E. and, thus, the normalization of the Jewish diaspora.

According to historical evidence and biblical tradition, the early history of the Jewish people highlighted their concentration in a single location: first the holy land, then Egypt, then back again in the holy land. When the Romans conquered and destroyed the last major Jewish kingdom around 70 C.E., the Jews were scattered around the world. Later, economic migration, intermarriage and persecution drove them to move around the globe even more.

In place of the Temple as a single source of Jewish political and religious power, multiple sources of authority sprang up to replace it. This included everything from local kehillot to new forms of Judaism like the Reform movement.

In this way the Jews were turned into a diaspora like any other diaspora: they remained connected to an ancestral homeland but they lived around the world and became integrated into their “host” countries.

But still, even putting aside the religious-based and ethnic-based anti-Semitism that marked them as different, the Jews always thought of themselves as unique from other diasporas because the underlying assumption that accompanied all these moves was that they were temporary. Even if they didn’t intend to actualize it, Jews continued to remember their existence in a single place — the Land of Israel — in liturgy, prayer and study. It felt right to believe in a reconstitution of Jewish sovereignty, even while ignoring what that would mean for Jews’ living arrangements.

Until the emergence of Zionism, very few Jews thought the condition of exile would end soon. Zionism’s critique of what it saw as a passive acceptance of exile and, thus, persecution and abnormality made many Jews — at first a minority, to be sure — start thinking about what it would be like to live in a single location again.

For the American Jewish community in particular, the establishment of Israel in 1948 and its growth coincided with a strengthening of the Jewish position in the United States. American Jews became more integrated into the American economic and political systems, and more comfortable.

It’s true that the existence of Israel has caused American Jews to feel uncertain about their status as Zionists. As Zionism became more acceptable after 1948 and, especially, after 1967, their attachment to the Jewish state was a source of both pride and confusion. That uncertainty continues in different forms today, as a younger generation has sought to redefine what it means to be “pro-Israel.”

No other diaspora engages in the kind of ongoing fierce disputes that characterize the Jewish diaspora, especially the American Jewish community. Debates about how involved diasporas and ancestral homelands should be in each other’s affairs certainly take place. At certain moments those debates touch on the fundamental meaning of diaspora and homeland, such as arguments in the American Irish community over support for the IRA in the 1970s and 1980s. For the Armenian diaspora, getting countries around the world to recognize the Armenian Genocide has at times been more important than it has been for the state of Armenia itself.

The Jewish diaspora always stood out for maintaining these kinds of debates throughout the years, driven by the lingering sense that a single location is the ideal disposition for the Jewish people. This is a reflection of both the effort to remember Jewish sovereignty, such as the proclamation “next year in Jerusalem!” at the end of the Passover seder, and Zionism, which viewed diaspora as a negative and even unsustainable condition.

Now the Jewish people have finally accepted that they don’t need to live in Israel to be Jewish or a people.

It turns out that the early Zionists were wrong when they argued that having their own state would make the Jews like other peoples. Normalization would, in fact, occur when the Jews had the option to live either in their own state or somewhere else. It seems that we have finally reached that moment.

Brent E. Sasley is Associate Professor of Political Science at the University of Texas at Arlington. He teaches and writes on international relations, Israeli politics and foreign policy, and Jewish politics.