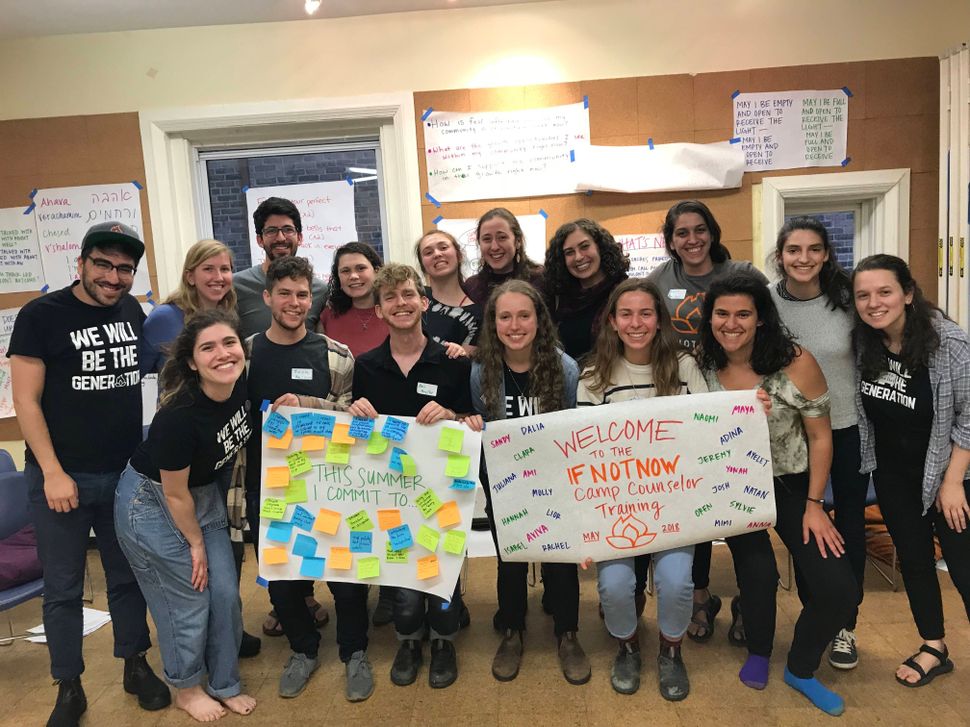 Image by Courtsey of IfNotNow

By Ramah alumni who are members of IfNotNow June 12, 2018

On March 22, following months of gathering testimonies and public campaigning urging Ramah and other Jewish summer camps to talk about the Occupation and include Palestinian perspectives, we — alumni of six Ramah camps and members of IfNotNow— had the opportunity to sit down with National Ramah Commission Director Rabbi Mitch Cohen to share our concern that Ramah’s Israel education leaves campers with an idealized view of Israel and a lack of understanding of the Palestinian experience under Occupation.

Ramah is the official camping arm of Conservative Judaism. It is also the place where we spent our summers as campers, counselors, and roshei eidah (unit heads). Ramah is where our Jewish identities were shaped and our passion for social justice took root.

As counselors and staff members at Ramah, we dedicated years of our lives to cultivating the next generation of critically-thinking Conservative Jewish leaders. It is out of our deep commitment to Ramah and to the Jewish future that we came to Ramah’s leadership with a firm request: that Ramah commit to including Palestinian narratives, the realities of Occupation, and the Jewish values of justice, dignity, and love for all people in their Israel curriculum this summer.

Our meeting on March 22nd went better than any of us would have imagined. We felt validated by Rabbi Cohen regarding the hurt we experienced by being part of a generation of campers who believed we were taught a narrow, one-sided narrative about the conflict in Israel-Palestine. And he committed to prioritizing change around Israel education at camp. We left with a verbal commitment from Rabbi Cohen that, this summer, more of the painful stories of Occupation would be included in the curriculum. As he put it, “Palestinian narratives… what you would call ‘the harshness of the Occupation,’… is language for real human suffering. It exists and it’s horrible and it’s sad and [it] needs to be part of what we teach kids when they learn about Israel.”

Unfortunately, it appears we were wrong. In a series of public statements, Ramah and its affiliates have slowly but surely walked back each and every one of the commitments they made to our faces.

On June 6, we were frustrated and disappointed to discover that NRC, responding to “articles in the Jewish press,” released the following vague statement, implicitly mischaracterizing IfNotNow’s demands: “Our older teens and staff members represent a range of opinions on many contemporary issues, and a wide variety of positions supporting Israel can be voiced and discussed. We do not, however, permit the sharing of anti-Israel educational messages at camp.” Afterward, the leadership of Ramah Wisconsin, in an email and Facebook post with the NRC statement, added that “we have made no changes in our approaches to Israel education from previous summers.”

Yesterday, the National Ramah Commission doubled down on their message, sending out the following statement to a number of institutional partners: “Ramah camps have not engaged—and will not engage—in any way with IfNotNow as an organization. This past winter, members of the National Ramah staff agreed to meet with 15 Ramah alumni affiliated with IfNotNow, who wanted to share their perspectives. After listening to their views, we made it very clear to them that while liberal pro-Israel views on the conflict can be voiced and taught at camp, we do not allow any anti-Israel, anti-Semitic or anti-Zionist education at Ramah.”

This is false. At no point during the meeting did that idea — that anti-Israel, anti-Semitic, or anti-Zionist messages may not be taught at camp — come up. This is because discussing it would have been completely unnecessary. At no point did we ask Ramah’s leadership to endorse anti-Israel, anti-Zionist, or anti-Semitic educational content. Our request in March, which remains the same today, is that Ramah talk about the lived realities of Occupation and include Palestinian narratives.

IfNotNow is a singularly-focused organization with a clear moral mission: to end American Jewish support for the occupation of the Gaza Strip, the West Bank, and East Jerusalem. This is a cause that the vast majority of Conservative Jewish institutions ostensibly support in their endorsement of the two-state solution.

We do not take a stand on any other issue; we are merely pushing our Jewish communal institutions to live up to their professed values.

It goes without saying that IfNotNow, a group of deeply committed young Jews, is not an anti-Semitic organization, and it is cowardly and offensive of Ramah’s leadership to imply otherwise.

Despite months of work and deep engagement between hundreds of Ramah alumni and the institutions they hold dear, these statements from Ramah send a clear message to IfNotNow and to the broader American Jewish community: the promises made on March 22 mean nothing.

We at IfNotNow believe it is way too late for “no changes.” The ongoing, 51-year-long Occupation is a daily nightmare for Palestinians who live under it and a moral disaster for American Jews who support it. Ramah, as a leader of the American Jewish camping world, is one of the most crucial sites where change can end the American Jewish community’s support for the Occupation. Camp shapes the next generation of American Jews, and it’s up to us to make sure that that generation stands up for freedom and dignity for all.

Staff week trainings at the various Ramah camps are underway and campers will be arriving in the coming weeks, with campers at Ramah Wisconsin arriving Tuesday afternoon. Despite NRC’s statement, we are committed to supporting the dozens of current Ramah counselors at seven camps with whom we’re currently in touch. These counselors are thoughtful, caring people who are broadening the conversation and innovating nuanced approaches to discussing Israel and the Occupation with their campers this summer.

This week has been discouraging, but we care too deeply about our Ramah community to give up. We will continue to stand by Ramah staff, whether or not the National Ramah leadership has the moral courage to do so.