Commentary’s Race Baiting Of Blacks And Jews Is So 1963. Literally. 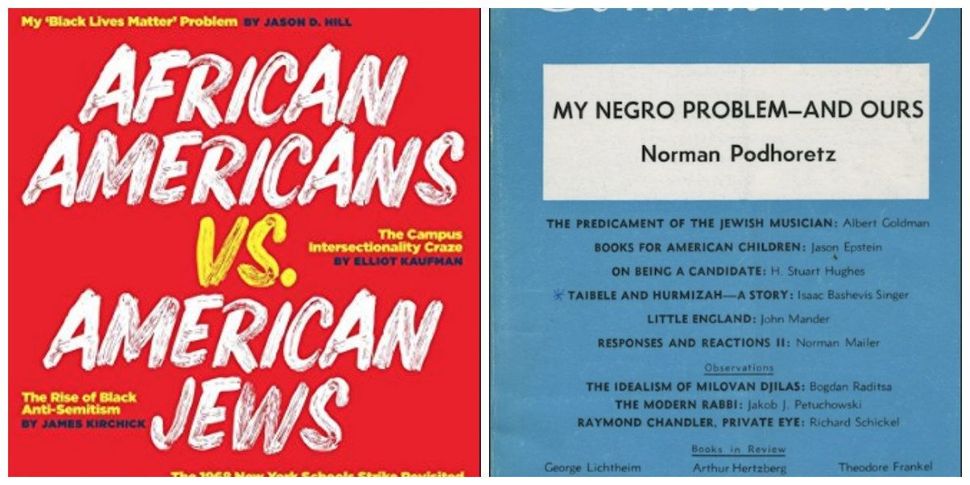 A few weeks ago, I chastised journalist and progressive activist Shaun King for perpetuating a false binary between Blacks and Jews that erases my identity as a Black Jew.

On Friday, Commentary published a shockingly tone-deaf and inflammatory cover that screamed, “African American vs. American Jews!” With mediocre and race-baiting headlines like “My Black Lives Matter Problem,” “The Campus Intersectionality Craze,” and “The Rise of Black Anti-Semitism,” you would be forgiven for thinking Commentary was solely authored by Roseanne Barr or Ann Coulter.

While masquerading as powerful, Spicy Take ™ journalism, this cover amounted to nothing more than an advertisement for a Jim-Crow era MMA show.

I’ll get to the racist implications of messing with people’s identities, erasing Black Jews like me by pitting Blacks against Jews to incite racism and wanton anti-Semitism. But first, let me start with a little history. Because this cover and the sensationalizing of race issues isn’t a fluke or a miscommunication for these folks; Commentary has a long history of being incredibly hostile towards marginalized groups.

In fact, this cover hearkens back to a February 1963 cover of the magazine, also about race relations.

Back in the 1960s, the Southern black people in my family were being lynched, raped, and murdered. In 1963, my maternal grandmother was picking cotton. Other members of my family was participating in a mass exodus to the North in search of freedom from white terrorism.

While all of this was going on, Norman Podhoretz, then editor in chief of Commentary, somehow found the time to write an essay entitled, and I kid you not, “My Negro Problem, and Yours.”

It’s a lush, wordy piece of drivel, a masturbatory essay in which Norman gets beat up by some black kids in Brooklyn, quotes James Baldwin heavily and makes “brave” concessions to the idea that white privilege does, in fact, exist, only to arrive at the conclusion that he has a problem with black people and thinks mixed race couples are “disgusting”.

Also… Norman would really like us to know that he has penis envy of black men.

Live and in-stereo, Norman gifts us with nuggets of wisdom that traffic in hateful stereotypes that have been used for centuries to justify violence against Blacks. For example, “In my world it was the whites, the Italians and Jews, who feared the Negroes, not the other way around. The Negroes were tougher than we were, more ruthless, and on the whole they were better athletes.”

Beware the white liberals who care about Blacks, Norman warns, “who permit Negroes to blackmail them into adopting a double standard of moral judgment, and who lend themselves—again assuming the responsibility for crimes they never committed—to cunning and contemptuous exploitation by Negroes they employ or try to befriend.”

Norman’s piece does end on a less hateful if dubious suggestion. He suggests that the only way to put an end to the white man’s hatred of Blacks is for everyone to marry each other, erasing racial difference by creating only racial difference.

In fact, I and my family are products of such ethnic mixing, the embodiment of Norman’s solution to racism.

So it’s ironic that Norman’s son and successor, John Podhoretz, has chosen to erase my existence from the cover of his father’s magazine. In the world of John Podhoretz, there are only “African Americans” and “American Jews.”

As a Black Jew, I read the essays included with horror. Jason D. Hill’s essay, “My Black Lives Matter Problem,” horrifically belittles police brutality and condescendingly suggests that the movement is “wrong” on crime. Hill claims that black people are the ones killing black people, without taking a few seconds to analyze the racist reasons why crime is prevalent in black areas. Perhaps most disgustingly, Hill gives his piece a title that directly hearkens back to Norman Podeheretz’s aforementioned piece, which the magazine currently describes as “One of the Most Controversial and Powerful Essays Published in COMMENTARY.”

How in 2018 can you brag about having published an article called “My Negro Problem”? How can you call it the most powerful essay ever published?

This fact alone should show us what this publication stands for: rampant anti-blackness, hidden under the thin veneer of “intellectual rigor.”

I do not take issue with the fact that Commentary attempted to delve into complex topics surrounding the Black and Jewish communities. What I do mind is the way they made a complete mockery of those issues by appealing to the most base and prejudiced instincts of non-Black Jewish people in America.

For a publication that spends so much energy calling out anti-Semites like Farrakhan, they seem to have been taking detailed notes on his race-baiting and exploitative strategies.

Commentary’s latest stunt is harmful in so many ways. Stylistically, with its blood-red background, wrestling style fonts, and contentious headlines, the cover was meant to drive home a persisting stereotype: that Black people are aggressors, a problem to be eradicated, negative social forces which must be neutered.

Commentary in other words, still has a “Negro Problem.”

And the message — that among all the issues facing American Jews today, the social movements of African-Americans are among the most pressing threats — is patently false. After Trump’s inaguration in 2017, Anti-Semitic incidents soared by 86% in just a few months and the anti-Semitism watch office in the State Department was closed. Also in 2017, 223 African-Americans and 179 Latinx people were killed by police.

So perhaps instead of blaming black people for their own deaths, Commentary could have published a piece about how this new administration uses authority to further make vulnerable populations more vulnerable.

Aside from being ridiculous, it’s also extremely counter-productive to suggest that Black and Jewish interests are divergent. 22.5% of African-Americans living in the New York area are living in poverty or near poverty. Nearly 20% of Jewish New Yorkers are living are in the same condition. Instead of blaming black people for their own suffering, Commentary could have called for more mutual effort in eradicating poverty in New York.

But most tiresome of all, with its unoriginal dichotomy, the cover also ignored the fact that there are many people who experience both oppressions — anti-Semitism and racism.

And in 2018, I’m really fucking tired of having to remind people of this fact.

Black people are not a monolith, and by treating us like one, Commentary advocates for our dehumanization.

It is this that makes it racist.

Commentary’s Race Baiting Of Blacks And Jews Is So 1963. Literally.