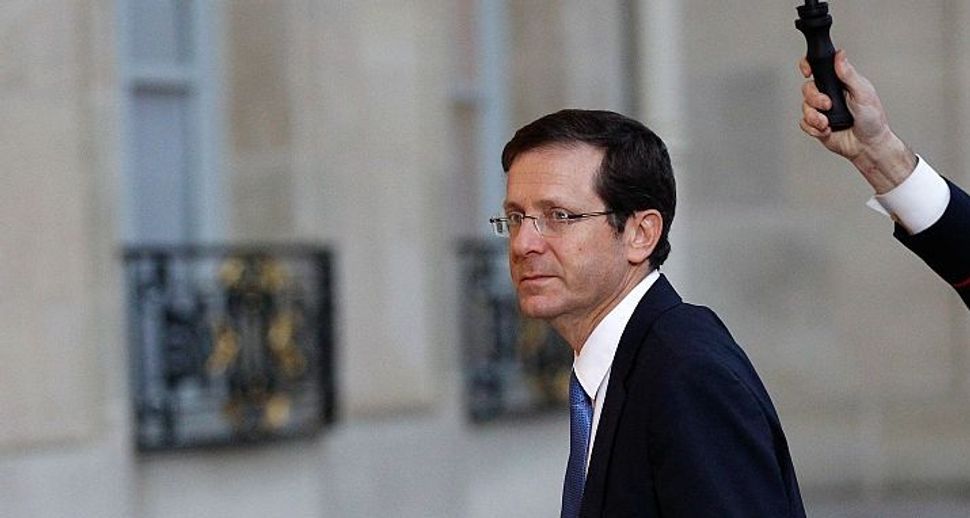 On Sunday, Isaac Herzog — outgoing leader of Israel’s opposition party, son of the sixth president of Israel, grandson of a chief rabbi — was unanimously elected chairman of the Jewish Agency for Israel, the largest Jewish nonprofit in the world.

It took only a few days for him to run into the buzz saw of American sensitivities on intermarriage.

In an interview in Hebrew to Ynet, an Israeli news outlet, Herzog used the word magefa, plague, to describe the prevalence of Jews partnering with non-Jews in the Diaspora, and said there must be a “campaign, a solution” to address this widespread concern.

On Wednesday, Herzog told me in a phone call from Israel — his first with an American news outlet — that reactions to the Ynet interview “distorted the meaning and intention of what I said. A Jew is a Jew is a Jew, no matter which stream he belongs to, if he wears a skullcap or not.“ The discourse on interfaith relations is different in Israel, he said. He was using magefa as a slang word: “I didn’t mean it in any negative terms.”

Now, Herzog is a seasoned politician born into what passes for Israeli aristocracy, who should be well acquainted with American sensibilities since he was educated at the prestigious Ramaz School on the Upper East Side while his father was a United Nations ambassador, and has interacted with Diaspora audiences numerous times. Still, I’m willing to give him the benefit of the doubt here — as long as takes this early stumble as a warning sign that many American Jews are becoming increasingly unwilling to let anyone, from Israel or their own communal organizations, tell them what to think and how to behave and who to love.

Herzog assumes the helm of the Jewish Agency at a time when its very reason for being is under scrutiny. Originally established in 1929 to promote immigration to what was then Mandate Palestine, the sprawling organization began to focus more on promoting Jewish identity under its outgoing leader, the heroic Natan Sharansky.

It’s ironic that some American leftwing commentators are lambasting Herzog for his intermarriage remarks when, in fact, his election was a poke in the eye to Prime Minister Benjamin Netanyahu, who backed another candidate for the post. But that’s not the only reason many others thought he was the right person for the job.

“Herzog has a good understanding of Diaspora Jewry, especially some of the major challenges we are facing,” Ken Bob, national president of Ameinu and a JAFI board member, wrote in an email. “Addressing the distancing of liberal young Jews from Israel is a defined project of JAFI now, and he is well equipped to lead a process that will creatively provide programs and engagement.”

He certainly is eager to cite his liberal bona fidas. “I’m a liberal in my political beliefs,” Herzog told me. “It is not my role in life to be judgmental.”

His comments on intermarriage reflected concerns he heard from many friends in the Diaspora “who are talking to me about their worries about the Jewish education of their kids in interfaith marriages,” he said. This doesn’t surprise me. The rate of Jews raised in Reform and Conservative households who marry non-Jews is steadily increasing, and I am not surprised that the kinds of folks Herzog interacts with are anxious about their grandchildren’s fealty to faith and tradition.

But in our conversation, Herzog demurred when asked about specific policies on conversion and egalitarian prayer — the two contentious religious issues at the source of the growing Diaspora disaffection with the hard-line Netanyahu government and, by extension, organized Jewry. (It was a relatively brief interview, and we didn’t get to other subjects, including the Israeli-Palestinian conflict.)

“We need to open the gates and the doors and the windows for anyone who wants to join the Jewish people,” he said. “What we have to do is find a historical solution for the gap that has opened up between what I call Jerusalem and Babylon [considered the first Diaspora community.] We have to find a way to maintain that bridge.”

Close observers in Israel, such as the Haaretz columnist Anshel Pfeffer, believe the Jewish Agency “has failed to articulate a core mission for itself” and wonder whether Herzog is bold enough for the revitalizing task.

I sincerely hope he is. Herzog is motivated, he said, by “a passion for the state of the Jewish people.” He’ll need that passion and much more to re-imagine his new agency as a true conduit between Israel and Jews elsewhere — even if they happen to be married to someone outside the faith.