The Alt-Right Isn’t Going Away 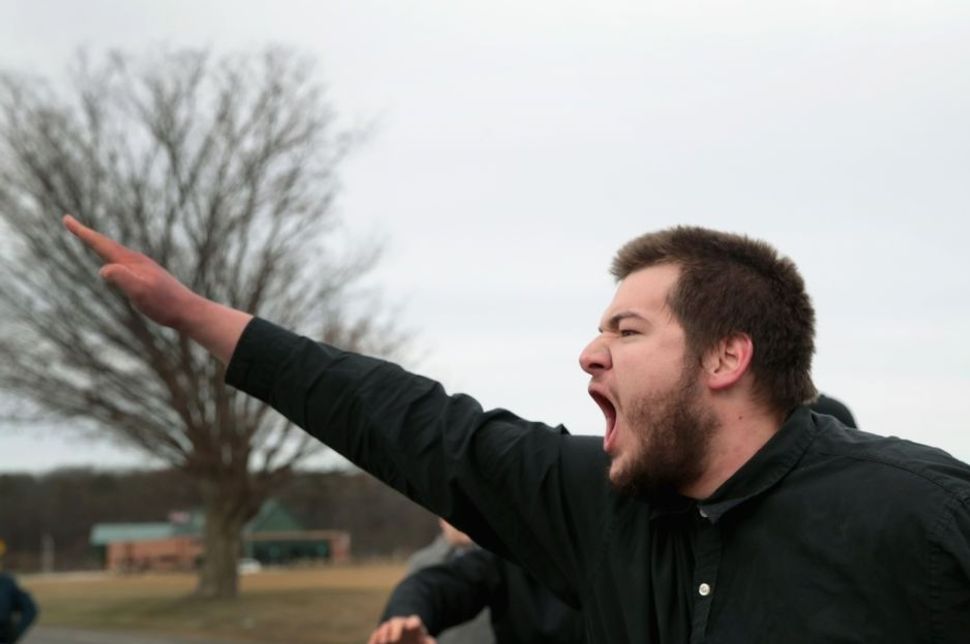 White nationalists clash with counter-demonstrators before the start of a speech by white nationalist Richard Spencer at Michigan State University on March 5, 2018 in East Lansing, Michigan. (Photo by Scott Olson/Getty Images) Image by Getty Images

Many were shocked by the sudden rise in white supremacy following Donald Trump’s surprise electoral win in 2016. But they needn’t have been. America has been here before, as recently as the late 1990s.

Extremist surges typically last at least five years. The surge of white supremacy that started in the 1980s with the recession and farm crisis receded by the late 1980s; the surge in anti-government extremism that began in 1994 with the militia movement largely faded by 2000.

Here in the U.S., we are smack in the middle of one of these cycles. Following years of retrenchment, America’s white supremacist movement is in the midst of a resurgence. A growing number of young people, many of them relatively well educated, have in recent years been flocking to the racist and anti-Semitic ideology of a particular subculture of this movement, known as the alt-right.

The alt right (short for “alternative right”) is a segment of the white supremacist movement consisting of a loose network of racists and anti-Semites who reject mainstream conservatism in favor of politics that embrace implicit or explicit racism, anti-Semitism and white supremacy.

The alt right shares this concept of white supremacy, though it’s a unique subculture characterized mostly by its young demographics. Those associated with the alt-right today are the most aggressive and energized segment of the white supremacist movement today, fueling its growth and activity.

Recently, the alt-right has been dogged by infighting, evictions from internet platforms and various lawsuits. This has led to news stories declaring the impending collapse of the alt right

But it’s hardly on its last legs. In fact, it still plays a significant role in promoting and amplifying anti-Semitism and hate across the country, and even around the world.

The alt-right continuously demonizes Jews as responsible for multiculturalism, non-white immigration, LGBTQ rights and other societal changes they rage against.

Members of the alt-right believe fervently the anti-Semitic conspiracy theories created by its older counterparts in the white supremacist movement. Many use the expression “The Goyim Know,” referring to an anti-Semitic trope about Jews trying to keep non-Jews “in the dark” about their purported plans to control world events. And they see themselves as being at war with Jews and non-whites.

Richard Spencer, perhaps the most recognizable face of the alt-right, openly embraces anti-Semitism, inviting anti-Semites to speak at his National Policy Institute conferences and refusing to condemn the “Heil Hitler” salutes given by participants at the 2016 NPI conference.

But Spencer is hardly alone; he is merely the most visible of an army of alt-right anti-Semites.

Andrew Anglin, who runs The Daily Stormer, a neo-Nazi site associated with the alt-right, on a daily basis uses anti-Semitism as a rallying cry to stir his supporters and encourage trolling campaigns. He is facing at least three lawsuits tied to his trolling activities. One involves his harassment campaign against a Jewish realtor in Whitefish, Montana, whose family — along with the wider local Jewish community — was mercilessly attacked online and harassed by Anglin’s supporters.

The alt-right’s anti-Semitism was front and center last summer during the Unite the Right rally in Charlottesville, Virginia. That event, where a young woman was killed demonstrating against the racism on display, brought tremendous negative publicity and scrutiny of white supremacists, though it also sparked a rash of infighting.

The rally, which featured chants of “Jews will not replace us,” awakened many Americans, and particularly the Jewish community, to the uncomfortable and terrifying realization of the extent to which American white supremacists had become emboldened and empowered.

These racists have propelled the alt-right’s recruitment tactics, including unprecedented white supremacist propaganda campaigns on college campuses, many of which target Jews.

In just the first five months of this year, ADL’s Center on Extremism documented 142 incidents of white supremacist fliers on college campuses and nearly 200 propaganda incidents in other, public areas.

Highway banners are another preferred tactic and they have included phrases like “Jews Did 9-11,” “The Holocaust is a Lie” and “UnJew Humanity.”

It’s not just the alt-right that engages in blatantly anti-Semitic activity. Another rising neo-Nazi group is Atomwaffen, whose members claim to prepare for a race war to combat what they consider the cultural and racial displacement of the white race perpetrated by Jews. The group’s members have been linked to multiple violent crimes, including the killing of a gay Jewish college student in California.

Atomwaffen promotes the idea that society and government are collapsing and that democracy and capitalism have “given way to Jewish oligarchies and globalist bankers resulting in the cultural and racial displacement of the white race.”

But the alt-right maintains outsized influence, in part because of the size and reach of its social media presence. Prominent alt-right figures have tens of thousands of followers, and rank-and-file adherents are often spurred to engage in harassment and vicious trolling of Jewish communities — including, as highlighted by an ADL Center on Extremism investigation, Jewish journalists.

Though some prominent alt-right figureheads have fallen on hard times — Richard Spencer, for example, has put his controversial college tour on hold after a lackluster event at Michigan State University in March, which saw few supporters showing up — the racist and anti-Semitic energy and people behind the alt-right have unfortunately been able to continue their campaigns of hate unabated.

Even as their leadership confronts internal tumult, we cannot afford to be distracted or to let down our guard. It’s critical that we continue to work together to combat the hateful ideology of the alt-right.

University, civic and political leaders must use their bully pulpit to speak out against the hate embodied and propagated by the alt-right. This is the key to defeating the movement — and its racist, anti-Semitic ideology — in the long run, for good.

Oren Segal is the director of the Anti-Defamation League’s Center on Extremism.

Oren Segal is director of the Anti-Defamation League’s Center on Extremism.

The Alt-Right Isn’t Going Away