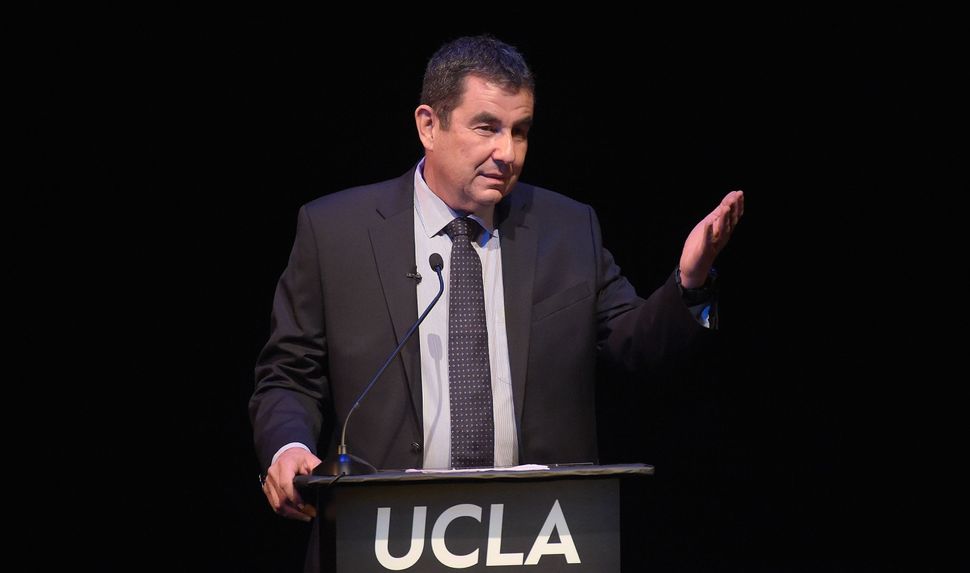 A 4,000 word interview published last week in Haaretz with the disgraced journalist Ari Shavit occasioned two strong and popular responses on our website, reminding us again that the question of if, when and how to forgive trespassers is still unsettled in this continuing #MeToo moment.

Shavit, you may remember, is the author of the acclaimed “My Promised Land,” the publication of which turned him into a regular on the Jewish speaking circuit — until October 2016, when the journalist Danielle Berrin accused him of sexual assault. After the Forward revealed another harassment allegation, Shavit resigned his newspaper and TV gigs and retired from public life.

For a year, anyhow. An attempted return last December was nixed after two more women came forward with charges of inappropriate behavior. Now, with the Haaretz interview, Shavit is clearly seeking redemption. Does he deserve it?

Certainly not, wrote Jenny Singer, the Forward’s deputy life editor, in a stinging piece that pointed out an inconvenient fact omitted from Shavit’s interview: He never actually apologized to Berrin for committing sexual assault. And, contrary to the impression he leaves, she [has never forgiven him.(https://www.nytimes.com/2017/12/22/opinion/metoo-sexual-assault-forgiveness.html)

Then columnist Bethany Mandel weighed in, calling the interview “galling,” filled with self-justifications and jargon meant to impress younger women (the subjects of Shavit’s unwarranted attentions.) “The piece presents a man who clearly believes he deserves to be forgiven,” Mandel wrote.

I’m not here to pile on, only to offer a couple of observations.

At the time, Shavit’s fall from grace and promise to reform were compared favorably to the utter lack of remorse and the absence of punishment for then candidate-Donald Trump after the release of the infamous “Access Hollywood” tapes earlier that month.

Of course, what we have learned since is that now-President Trump never has to apologize or be held to account for his misogynist misdeeds (or his many other sins.) Anyone looks good in comparison. And while Shavit did lose his public profile, so have countless other men who are finally being held responsible for their reprehensible behavior — after they were caught. Shavit resigned hours after the Forward’s story was published. And as the editor of that story, I can say with authority that the sequence of events was not a coincidence.

Second point: “My Promised Land” was an important and courageous book. It was also notably devoid of women. The 17 chapters narrating the Zionist enterprise contained very few women characters. Shavit even chose to examine the 2011 social justice protests through the experience of a man, although women dominated the leadership of that movement.

That may not have been a coincidence, either.

A truly repentant and reformed journalist would not only fully apologize to those he hurt, but recognize the more subtle but equally insidious ways in which women are diminished or erased from public life.

What else I’ve been reading. As I prepare to write about the new Supreme Court nominee whenever he or she is named this evening, I came across this sobering analysis by Kevin J. McMahon, a professor of political science at Trinity College and an expert on the Supreme Court and the presidency.

Writing in The Conversation, McMahon observes that this may be the second time in a year when a “minority president” — Trump lost the popular vote — appoints a “minority justice.” That is, as in Justice Neil Gorsuch’s case, a justice who was approved by a majority of U.S. senators (54) who were elected by a minority of voters. (The Democrats who opposed Gorsuch garnered nearly 20 million more votes in their most recent elections.)

This, he argues, “raises a question that goes to the heart of the Supreme Court’s legitimacy in our democracy. Will this be a court out of line with America?”

And please don’t forget…. The plight of thousands of children in detention across the United States, ripped from their parents’ arms, unaccounted for by a government both cruel and incompetent. The Associated Press reported that children as young as one year old are being forced to go before immigration courts in order to be reunited with their parents. One year old.

Reveal from the Center for Investigative Reporting found that a major U.S. contractor was quietly detaining dozens of immigrant children inside a vacant Phoenix office building with dark windows, no kitchen and only a few toilets for three weeks. Three weeks.

As Will Bunch, a columnist for philly.com, noted: We shower love and attention on kids trapped in a cave in Thailand while ignoring the kids detained by our own government at the border and around our country.

“Instead,” he reminds us, “these kids so desperate to have a safe and healthy childhood and grow into productive adults are more often treated as criminals — sleeping in wire cages inside abandoned Walmarts or in dusty desert tents in 104-degree border towns.”

“Our basic humanity depends on how far we’re willing to go to save our children.”

Looking forward. Believe it or not, I get to take vacation in this job! I will be away next week. Jane Looking Forward will return on July 23.