Can You Be Racist Against White People (Like Sarah Jeong)? Ask The Jews. 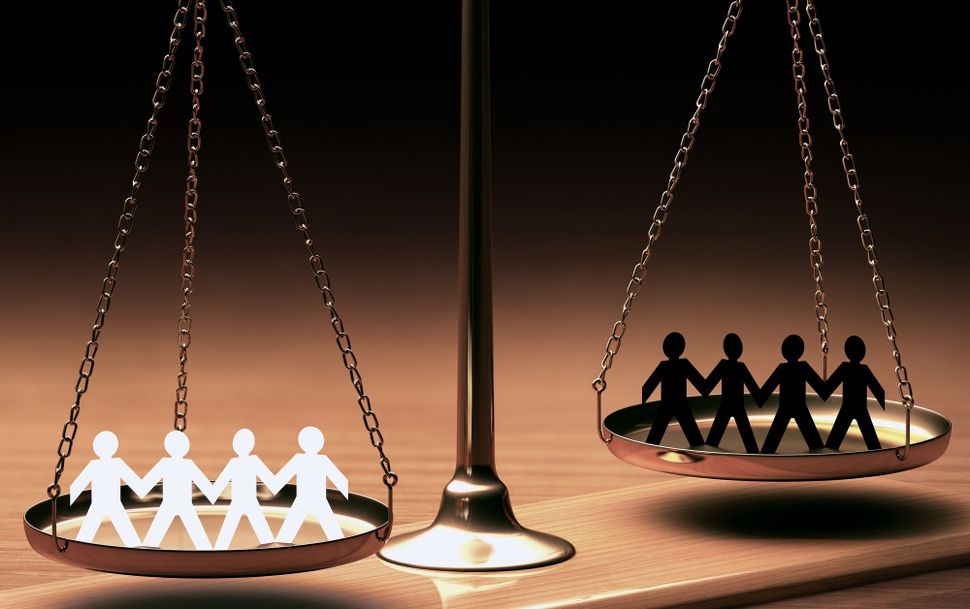 Can you be racist against white people? A recent New York Times hire has ignited a polarizing debate around this topic.

Last week, The Times announced it had hired Sarah Jeong, a tech writer for the Verge, to join its Editorial Board. The internet very quickly unearthed tweets Jeong had written in 2014 that seemed to expose her pleasure in mocking “white people”:

With examples like “#CancelWhitePeople” and “Oh man it’s kind of sick how much joy I get out of being cruel to old white men,” Jeong’s most controversial tweets were seized upon as examples of racism against white people by the right, only to be vigorously defended by the left on the grounds that one can’t be racist against white people.

The Times, along with Jeong herself, defended her hiring on the grounds that Jeong was merely responding to the intense harassment she’s been subjected to as an Asian American woman, and many others took up this purported context of Jeong’s tweets as a defense.

But many on the right were not buying it, insisting that disparaging whites is problematic, perhaps as problematic as disparaging racial minorities. Andrew Sullivan, writing in New York Magazine, argued that Jeong’s racism is obvious if you replace the word “white” with any other racial group.

“#cancelblackpeople probably wouldn’t fly at the New York Times, would it? Or imagine someone tweeting that Jews were only ‘fit to live underground like groveling goblins’ or that she enjoyed ‘being cruel to old Latina women,’ and then being welcomed and celebrated by a liberal newsroom,” wrote Sullivan. “Not exactly in the cards.”

In response to Sullivan, Zach Beauchamp argued in Vox that you can’t just replace “white” with “black” or “Jew” precisely because anti-white sentiment is not literal, whereas anti-minority racism is. Jeong’s tweets couldn’t be compared to anti-Semitism, argued Beauchamp, because her tweets were not meant literally; “white people” is a stand-in for racists, unlike anti-Semitic vitriol, which actually seeks to eliminate Jews.

Still others turned to the pabulum that racism is power plus prejudice to exonerate Jeong. “Racism is about prejudice, but it is also about power imbalance,” wrote Sarah Jones in The New Republic. “No reasonable person would entertain a comparison between a woman of color, who occasionally loses her temper at her trollers, and a neo-Nazi… because [women of color] belong to a class subject to centuries of institutional violence and social marginalization.”

Jones goes on: “The word societies for centuries have used for punching up is satire. The word we generally use for punching down is bigotry.”

This point of view — that one can’t be bigoted against someone who has institutional power — is mainstream in the left today.

1. Racism is abt the powerful keeping down the powerless

2. We (generally) are the powerful

4. “Fag” and the N word are slurs, because they subordinate

5. Your moral equivalence is nonsense

And yet, we Jews know how inadequate, and even dangerous, defining racism as contingent on power can be, precisely because anti-Jewish racism is always based on the belief that Jews have power, and are therefore deserving of hate.

Unlike racism against people of color, which stems from white people believing they are superior to people of color, hatred of Jews stems from the belief that Jews have supernatural powers, controlling the rest of the world from a secret cabal that is almost mystical in its structure and influence. In other words, anti-Semitism is based on the notion that Jews are dangerously and despicably superior to whites, using their evil powers to the detriment of white society.

As John-Paul Pagano wrote in these pages, “anti-Semitism differs from most forms of racism in that it purports to ‘punch up’ against a secret society of oppressors, which has the side effect of making it easy to disguise as a politics of emancipation. If Jews have power, then punching up at Jews is a form of speaking truth to power — a form of speech of which the left is currently enamored.”

Indeed, in Jones’ definition of racism, all forms of anti-Semitism would always be viewed as legitimate forms of satire, rather than ugly instances of racism.

You can see this dynamic at play in the unsuccessful struggle of the British Labor party to root out anti-Semitism. Even as Labor politicians insist that Jews drink blood and use their media to manipulate the world for Israel’s gain, people like Jeremy Corbyn, the popular UK Labor leader, struggle to understand how Jews, with all their institutional and economic success, could be worthy of his empathy and interventions on their behalf (this is only compounded by Jews who support Israel, with its all powerful army and oppressive policies against another racial minority — the Palestinians).

Certainly, the racism white Jews experience is hardly comparable to the systemic, institutionalized abuses that people of color and Jews of color face. We, like white people, don’t have to deal with mass incarceration, or police brutality, or workplace discrimination. By and large, Ashkenazi Jews who pass as white have, like other white people in America, been the beneficiaries of systemic racial injustice.

And yet, anti-Semitism not only persists but is on the rise across the globe. And the way the left defines racism means anti-Semitism is doomed to remain invisible.

Jews present the strongest case against defining racism as contingent upon powerlessness; such a condition would in 2018 preclude the majority of Jews from having racial prejudice against them be classified as racist, though it certainly is that.

But there’s a larger point here, beyond the fact that tying racism to powerlessness excludes necessary concern about one particular ethnic minority. Lurking behind the condition of powerlessness is the idea that the fight for racial equality depends on our ability to muster up empathy for those on the receiving end of racism. By making their powerlessness a condition of our support, this point of view ties the fight against racism to an emotional exercise, one in which your decision about the danger something presents is reduced to how much empathy you’re capable of feeling for the afflicted.

Is this minority powerless? the left definition of racism asks. If so, we fight for them. If not, we don’t.

No doubt, the world suffers from an insufficiency of empathy for the victims of racism, and this should certainly be a huge priority for the left and the right. Consider that only 14% of Republicans believe that racial discrimination is the main reason blacks can’t get ahead.

And yet anti-Semitism flourishes independent of how much institutional power we Jews accrue.

Being hawkish about fighting racism should not be reduced to a question of feeling; it should be about eliminating threats based on bigotry, whether or not we feel empathy for a particular minority or not, whether or not they are currently facing institutionalized discrimination.

A left that struggles to protect Jews from harm because we don’t require the same kinds of empathy as the victims of institutionalized racism should be relaxing its dependence on empathy, rather than ratifying it.

If the brouhaha surrounding Jeong’s hiring by the Times Editorial Board represents anything, it’s a good excuse to commit to fighting the deep-seated institutionalized racism that afflicts those worthy of our empathy without setting up preconditions for this fight that legitimizes hatred of Jews.

Can You Be Racist Against White People (Like Sarah Jeong)? Ask The Jews.