The Women Who ‘Don’t Have a Choice’ About Abortion, and the Man Who Is Stopping Them. 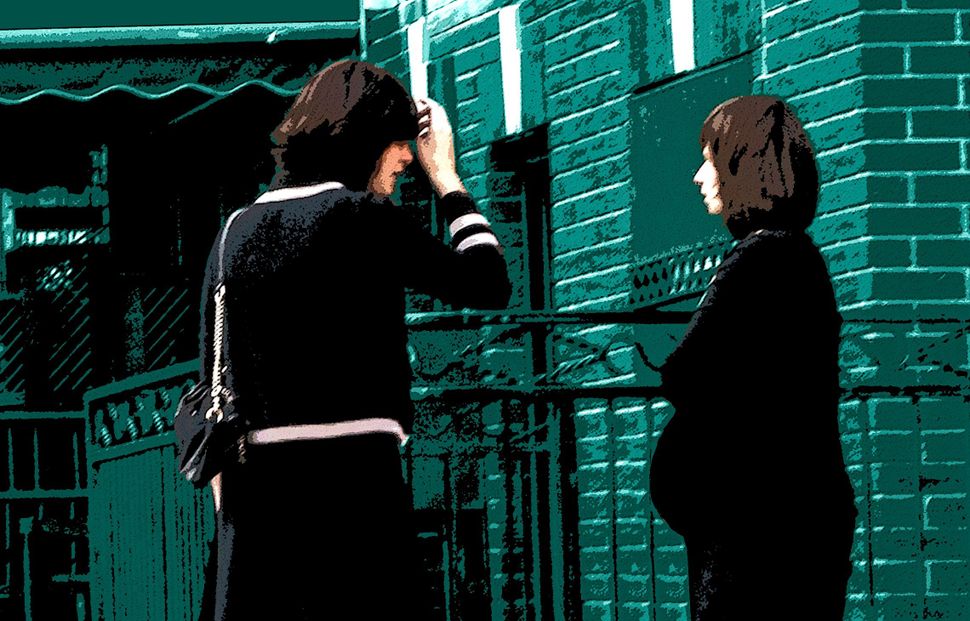 This was not the first time that the Forward reached out to Jewish women and asked them to tell their stories about abortion. In 2016, under the headline “Silent No More,” we published stories from all over the United States and Israel, even from Brazil — stories from women well-known and not, who struggled with the decision to end a pregnancy before Roe v. Wade was the law of the land and afterwards.

But this time, the stories were more complicated — and given the national political situation, more urgent.

It was Avital Chizhik-Goldschmidt’s idea. As an observant Orthodox woman, and wife of a congregational rabbi, Avital knew that the decision to abort is more fraught for women living in a religious community bound by rabbinic teaching and governed by a social ethic that mediates against women’s empowerment. She also knew that Orthodox women who have had abortions would be extremely reluctant to share their stories publicly.

So she gently reached out on social media to various online communities, asking questions, promising anonymity. The result is a powerful, at times heart-breaking compilation of first-person accounts in text and audio by women who had abortions for every possible reason: birth defects, rape, abusive relationships. Some found comfort in religious law and rabbinic counseling; others felt alone and ashamed.

They are all worth reading and listening to, but I want to call attention to one in particular. It was from a woman in the U.S., pregnant a second time, and at 31 weeks discovered that the fetus was severely damaged and would be condemned to a life of suffering. The pediatric neurologist recommended an abortion, and a prominent Orthodox rabbi agreed.

But the law of her state essentially would not allow abortion at 31 weeks, so she and her husband had to travel far, at great expense, to an unfamiliar, uninviting clinic to have the operation. It was devastating. As she wrote:

The challenging part for us was that the American legal system made it so difficult for us to follow halakha. If abortion becomes illegal, our religious right to have access to abortion is challenged.”

I don’t know what state the writer refers to, but her story could have happened in New York, home to the largest Jewish population in the world outside of Israel. Because it turns out that a 1970 state statute, enacted three years before Roe, bans abortion after the fetus is 24 weeks old. And while federal law should theoretically supersede state law, here it effectively does not, because health care providers are afraid to violate the state law, which is a criminal act, subject to up to seven years in jail.

There is a solution: The Reproductive Health Act, sponsored by State Sen. Liz Krueger, which would decriminalize abortion, permit late term abortions to save the health of the mother or if the fetus is not viable, and bring New York state law in line with Roe. It passed the Assembly in March (again) and is held up in the Senate.

And by whom? Why another Jewish legislator, Sen. Simcha Felder of Brooklyn. Even though elected as a Democrat, he has consistently voted with Republicans, granting them a razor-thin majority. Felder, an Orthodox Jew, is opposed to abortion rights.

I hope he reads these stories. I hope he sees that observant Jewish women — likely in his own community — are struggling with searing decisions about life and death, decisions that will shape their own futures while adhering as best they can to Jewish law. Law that is written, interpreted and enforced by men.

If Roe is overturned — as President Trump and a distinct but powerful minority of Americans want — and the RHA is left to languish again, then the men who control this state will have to answer to those women. And to all women who wish only to have what men have: the right to control their own bodies.

What else I’m reading. For months, my colleague Josh Nathan-Kazis has been investigating the covert operations used to stifle pro-Palestinian activists on college campuses — the notorious one being the secretive Canary Mission, a blacklist of activists intended to censor their speech and destroy their career prospects. The first of his stories, published last week, detail how these anonymous operations have spent millions of dollars in the last three years and how this clandestine work is being used against activists at the Israeli border.

If you think this doesn’t have an effect on Jewish students on campus, think again. Better yet: read this piece by Brandeis student Shoshana Finkel, an ardent supporter of Israel who is appalled by these tactics and convinced that, in the end, they will backfire.

Giving thanks. Some years ago, I had the privilege of giving the commencement address at Bryn Mawr College, and thought long and hard about what I could possibly say that would be memorable. I had delivered two such addresses before this one (and one since) and the writer in me knew that I had to hone my message to focus on one thing I hoped students could remember during a long, tradition-laden ceremony.

I spoke about gratitude. Why it’s so important. How to cultivate it. Why writing a thank-you note, and praising your spouse, and honoring even the menial work that others do for you with a smile, can improve your life and bring happiness and dignity into the world.

I knew this to be true in the spiritual realm, the reason so many religious faiths focus on giving thanks. But it’s only now, as the scientific research on the benefits of gratitude is beginning to accrue, that we are learning of its actual medical benefits. (Here’s one recent story from The Conversation.)

If you’ve read this far, thank you.

Looking forward. This newsletter is now one year old! I relish writing it each week and have benefited enormously from the way it has opened up a new line of communication with readers. But I’m never satisfied, and really want to keep improving the product, growing the list, and serving the Forward’s public.

So, please take a moment to fill out this brief survey. And as always, send your comments and concerns to JaneEisnerEIC@forward.com

Referencing the above, THANK YOU.

The Women Who ‘Don’t Have a Choice’ About Abortion, and the Man Who Is Stopping Them.