Has Michael Cohen Gone From Sleazy Stereotype To Flawed Hero? 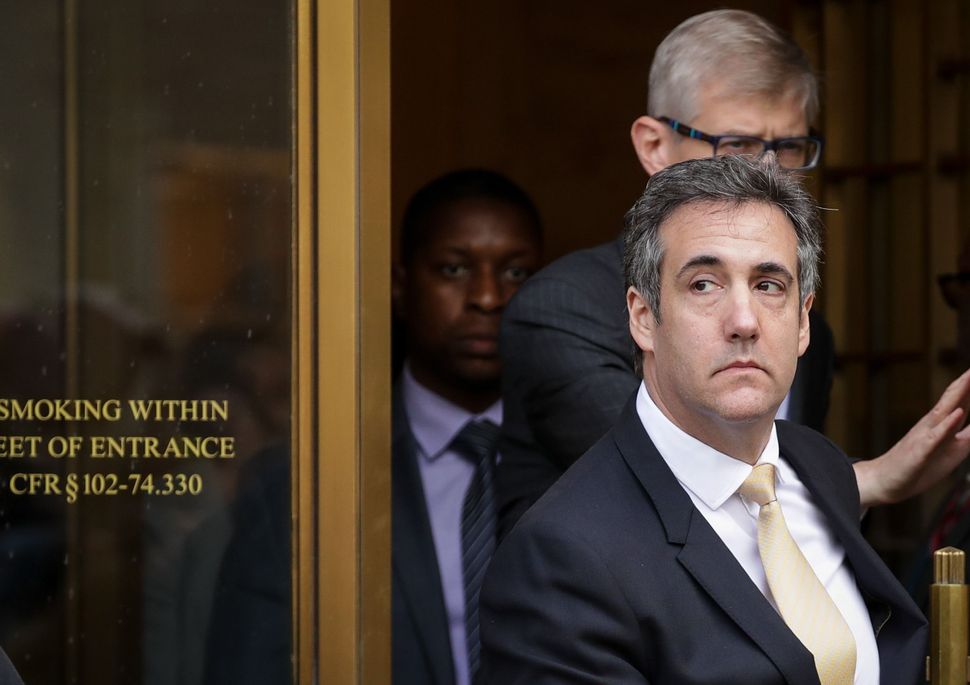 Michael Cohen is the Trump-world version of the cinematic Norman.

You remember Norman? Norman Oppenheimer? The sad, grasping, grating yet somehow endearing go-between in Joseph Cedar’s 2016 film by that name. Brilliantly played by the quintessentially goyish Richard Gere, he personified the ultimate Jewish fixer — too conniving to be a conventional nebbish, always on the prowl for the deal, insinuating himself where he doesn’t belong, drawn to political power like hungry Jews to the herring table after the rabbi’s sermon lasted too long.

“There’s an internal gift in every Norman, and it is essential to Norman-hood: They have no self-awareness,” Cedar told the Times of Israel.

But by the end of the film (I won’t give it away,) Norman has a revelation, as Cedar describes: “He’s forced to see how other people see him. He can’t lie anymore, his survival tools to keep everything spinning — it all collapses when he gains this awareness.”

That must have happened to Michael Cohen.

The man who was Donald Trump’s ultimate fixer, his supremely loyal personal lawyer, who sometimes sounded as if he’d break a few bones to protect the boss, had his Norman Enlightenment and pled guilty Tuesday to charges that could gravely damage the president of the United States.

Of all the compromised and cringe-worthy Jewish characters in the messy swirl of this administration, Cohen seems to most embody the tag line of Cedar’s film: “The Moderate Rise and Tragic Fall of a New York Fixer.”

Except that in the real-life version, the fixer may bring the boss down with him.

Which may be the only way this embarrassment of a man finds redemption.

Yes, he’s been an embarrassment. He’s like the worst stereotype of the Long Island Jew — son of Holocaust survivors, who marries into an immigrant family from Ukraine and manages to scheme his way into a small fortune in the murky taxi business, the sketchy real estate world, and other shadowy enterprises that seem to only shakily stay on the right side of the law.

He winds his way into Trump’s heart and begins working for the Trump Organization more than a decade ago, becoming known as the “Ray Donovan” of the office, ready to fix any problem at any hour, with plentiful cash and credible threats at his disposal. “My job is to protect Mr. Trump,” Cohen said in 2011. And so he did.

There are aspects of Cohen’s character and behavior that stray uncomfortably close to another Jewish stereotype, that of the “court Jew,” originally the Jewish banker to royalty, the person whose intelligence, cleverness, loyalty and financial dexterity assures him a secure place with the powerful — until it doesn’t.

Or as Cedar described his Norman: “Someone who finds his way into the close circle of a person who will eventually have power, by offering him a gift at a time when that person has very low resistance. Then gradually gaining influence as that person becomes more powerful, and finally being thrown back to the street when he becomes a liability.”

Even after the F.B.I. raided Cohen’s home and office in April, Trump initially stood by his man, tweeting that he was a “fine person with a wonderful family” who would never “flip” on him.

But flip he did. Cohen evidently had his moment of enlightenment — or self-interest, choosing cooperation with the government and the potential of a shorter prison sentence over an employer who treated him like “garbage.”

Cohen is not known to be a religiously observant man, but perhaps in this, the season of repentance for Jews, the weight of his twisted loyalty burned through his conscience, prompting an internal reckoning. Perhaps he needed to say “guilty” eight times before a federal judge to begin the process of teshuvah.

Perhaps the lies and the cover-ups and the financial shenanigans just got too much for him.

At the end of Cedar’s film, Norman essentially sacrifices himself for a larger good, reflecting the complicated way that a flawed character can influence history. Has Cohen done the same?

Has Michael Cohen Gone From Sleazy Stereotype To Flawed Hero?