Remembering Watergate, and Wondering Whether the Lessons Still Apply Today 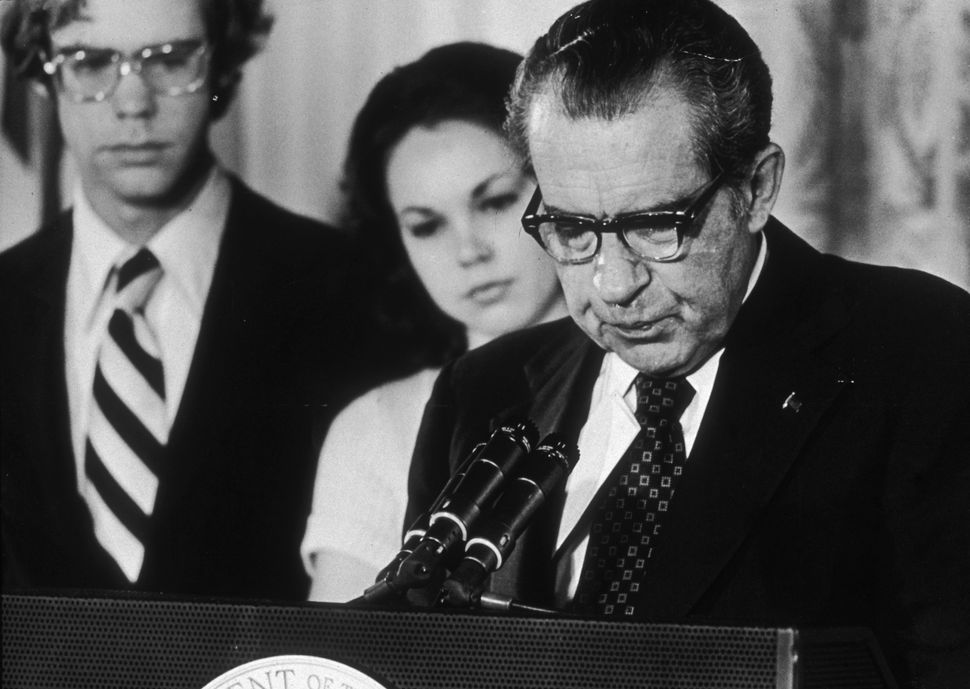 Richard Nixon, as he resigns from office Image by Getty Images

The tumult of political events last week, so many involving high profile American Jews, made me think again about Watergate.

The scandal and cover-up that led to President Richard Nixon’s resignation 44 years ago this month was the formative political experience of my emerging adulthood. I was transfixed by the televised congressional hearings, proud of the steady flow of breaking news from heroic journalists, and infuriated by the sense that something was very, very wrong in our seat of government and somehow the president of the United States was at the heart of it.

Then came Nixon’s resignation. I was actually flying home from my first trip to Israel on that day, August 9, 1974, and my friend and I peppered the pilot for news. (This is back when you could actually speak to pilots while the plane was in the air.) By the time I landed, it was clear we would have a new president.

“Our Constitution works; our great republic is a government of laws and not of men,” Gerald Ford said after being sworn into office. “Here the people rule.”

I have a vivid memory of reading an anecdote about that night, which I have been unable to locate in the decades since. It told of a father who strapped his young children into his car and drove to the White House to show them how it looked during this momentous transition.

It was quiet. No troops. No police. No signs of domestic upheaval. A peaceful transfer of power at the most consequential address in the world. Because the Constitution worked.

Do we still have that same faith today? As President Trump’s legal woes mount, as his own lawyer implicates him in a federal crime, as he continues to delegitimize the justice system, as the electoral security of our nation is under direct threat, I fear that the message being transmitted now is being corrupted by the very people who need to hear it the most.

One key and often overlooked fact leading to Nixon’s resignation and the peaceful transfer of power was the stalwart role played by leaders in his own Republican party. As Michael Koncewicz of New York University detailed in The Conversation, “a significant number of GOP members of Congress and the Nixon administration publicly resisted [Nixon’s] efforts to undermine the rule of law. Today’s GOP leaders, with few exceptions, meekly follow President Trump.”

Some observers believe that last week — with Michael Cohen’s guilty plea, Paul Manafort’s conviction, and so much more — will mark an inflection point in the Trump presidency. The events certainly convinced those like New York Times columnist Bret Stephens to take the unusual step of calling for Trump’s resignation.

As the leader of a not-for-profit, non-partisan newsroom, I can’t go there. But I can express my profound concern over the future legitimacy of our foundational institutions. I want to believe that they are resilient enough to withstand the assault by this president. I want to believe that my children and grandchildren will inherit an America that knows how to correct itself, peacefully and wisely.

What else I’m writing. As the newsroom was abuzz last Tuesday after Michael Cohen’s bombshell revelations, I realized that he reminded me of a certain Jewish character: Norman, the star of Joseph Cedar’s brilliant, disturbing 2016 film by that name. I wish I had time to see the entire movie again. But I did find a few illuminating interviews with Cedar that helped me make my point here.

What else I’m reading. Rabbi Sharon Brous, the founding rabbi of IKAR in Los Angeles, wrote poignantly in the Los Angeles Times about taking her 14-year-old daughter to Hebron during a family vacation in Israel. Not only does this piece model a loving, critical, honest approach to Israel. It also is an exemplary illustration of how to parent in this complex moment.

I’ve had a few painful conversations with Catholic friends in the wake of the latest revelations of how the Church permitted priests to sexually abuse children and adults and then covered up their crimes. One of those friends, E.J. Dionne, wrote a heartbreaking column today in The Washington Post about his struggle to remain a Catholic in light of this disgrace.

“The great missing piece in the church’s response was the failure of the hierarchy to atone — truly, deeply, credibly — for putting institutional self-protection over the interests of the young and the powerless who were harmed,” he wrote.

As we continue to grapple with revelations about child sexual abuse in the Jewish community — the Forward will soon have another story on this difficult subject — E.J.’s words are relevant for our institutions, too.

What would Herzl say? Laura Adkins, our deputy opinion editor who oversees Scribe, our community network, has put together a terrific package of short essays from eminent historians who were asked to imagine what Theodore Herzl would make of Israel today.

I love the fact that this project was prompted by a note from a Forward subscriber, David Kaplan, and that historians from so many different perspectives weighed in. Highly recommend!

Looking forward. Thank you to the many readers of Jane Looking Forward who filled out the recent survey and gave me some invaluable feedback and a lot of support. Among many findings, it seems that most of you really like the timing of this newsletter, Mondays at around 5 pm.

So this is an awkward announcement: for the next month, this newsletter will go out on Tuesdays, instead. I’m not ignoring you, I promise! It’s just that it makes sense to send this out the day after Labor Day, and on Tuesdays of the weeks when we will celebrate the Jewish holidays. Even so, there’s one exception — our offices are closed on Rosh Hashanah, and I won’t work that day, either.

And for those of you in the area, please join me next Tuesday evening, September 4, for a screening of the new film “93Queen” and a conversation with Judge Ruchie Freier at the Marlene Meyerson JCC Manhattan. Read more about this exciting event here.

Remembering Watergate, and Wondering Whether the Lessons Still Apply Today