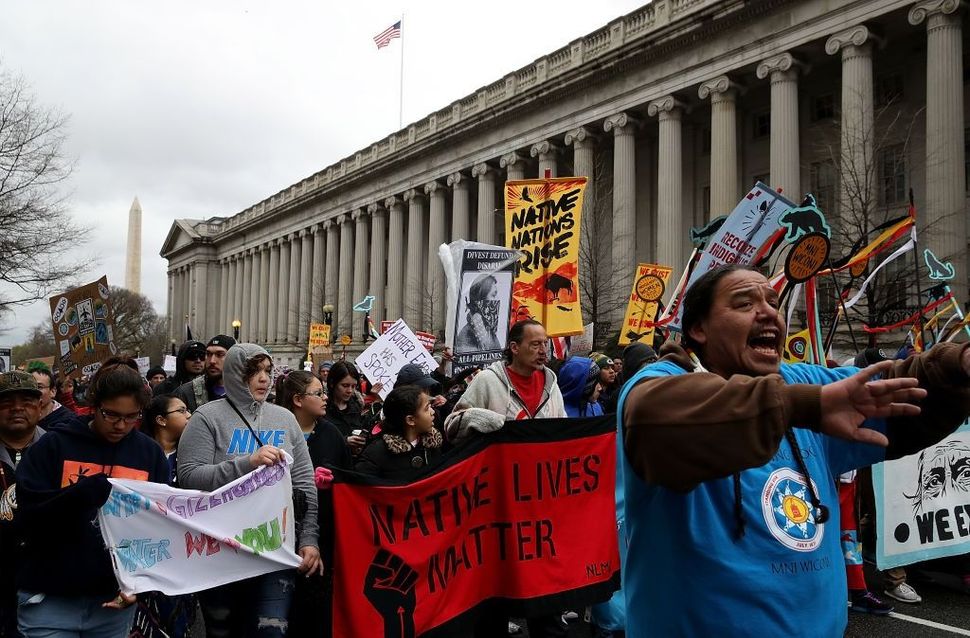 Protesters march during a demonstration against the Dakota Access Pipeline on March 10, 2017 in Washington, DC. Thousands of protesters and members of Native nations marched in Washington DC to oppose the construction of the proposed 1,172 Dakota Access Pipeline that runs within a half-mile of the Standing Rock Sioux reservation in North Dakota. Image by Getty Images

In 2016, the Standing Rock Sioux tribe ignited an indigenous rights movement that captured the world’s attention. At Standing Rock, hundreds of indigenous groups and nonindigenous allies gathered to resist the building of the Dakota Access Pipeline and the havoc it would wreak on the health of both the environment and the members of the tribe.

Carried by the legacy of centuries of violence against native people around the globe and the urgency of the climate crisis, the message of Standing Rock spread across tribes, countries, and continents. It was a complex and multilayered movement that called for environmental reform, indigenous sovereignty, and human rights.

The media and many non-indigenous people enthusiastically embraced the cause of Standing Rock. They clamored to buy merchandise (much of it deceptively sold by non-natives), write think-pieces about the critical nature of the movement and embark upon “pilgrimages” to Standing Rock.

Any consumer of media could see that there was a widespread interest in the fight at Standing Rock, but also in native culture in general. Currently, corporations still aid in the appropriation of native cultures and spirituality, but social justice movements and the media do not create as much space for indigenous voices and issues as they did then.

Because as time went on, something curious happened. One of the most monumental and important human rights campaigns in American history faded from the apple of the media’s eye. We stopped hearing about the fights against the building of pipelines and the human rights struggles that indigenous communities faced. We had begun talking about sovereignty. We had begun talking about the horrific sexual violence committed against native women. Why did many stop having those needed conversations?

I believe that for many, the interest in these movements was liminal — not fully formed or defined.

Because of our long tradition of slavery, colonization and genocide, our country has long been in a state of spiritual and moral darkness, creating a void that at times feels that it will never be filled. Arguably, the ones who suffer most from this darkness are the ones that benefit most from the conditions that caused it, the enslavement and subjugation of black and native people.

Ironically, the most privileged people in our society try to fill this spiritual void by appropriating and wearing our cultures. What is the function of such behavior? They seem to believe that the closer they can get to the victims of this country’s original sins, the more that they can be cleansed of the guilt associated with reaping the benefits of those sins.

This is what happened at Standing Rock and it’s why we have removed one of the most important events in American history from our discourse.

As Dr. Kalamaokaaina Nihe, a Native Hawaiian (Kanaka Maoli) activist who traveled to Standing Rock, explained, “When loneliness and disconnect is the greatest modern malaise, when the true reckoning of what climate change is not yet fully being comprehended, the cultural and spiritual wealth of people of color is the great [but] still not yet completely plundered frontier. It should not come as a surprise that even the best intentioned must struggle to resist the almost irresistible pull to commodify even revolutionary thought.”

A notable distinction Nihe makes is that it is not only white Americans who can find themselves guilty of this commodification. “Those of us who came in as allies, indigenous and non-indigenous alike, were all susceptible,” she said. “Even me. I came to fight for my people by uniting in a fight that, to me, represented all our fights. But I tried to always remember that it was never the river of my ancestors.”

Nihe’s insistence on recognizing and respecting the humanity and sovereignty of this movement stands in contrast to much of the prevailing attitudes surrounding indigenous rights. Inherently, many do not see the actual humanity in the human rights struggles of indigenous people. Instead, they are resolved to see indigenous people as supernatural beings, therefore viewing their causes as ethereal, not temporal.

But the thing about ethereal or spiritual matters is that they can be and often are put aside to focus on issues that one views as more pressing and urgent, particularly if you’re not strongly rooted in that spiritual tradition and community.

An indigenous Jewish member of the Dineh nation who asked not to be named told me they find the fetishization of native religions to be enraging, because such commodification leads to a lack of resources, causing indigenous people’s religious practices to be a hardship. As they talked about the appropriation of white sage, a rare plant required for many indigenous religious practices, they went on to say that, “Native traditions are deeply tied to our lands and our family/clan, not because of the ‘natives are at one with the earth’ stereotype, but because that is where our people are from. Just as Jews pray with the lulav and etrog, which cannot be substituted for different species, neither can I clear the air with rosemary incense.”

When people stopped having use for the “natives are one with the earth stereotype” in talking about Standing Rock, similar movements lost a lot of monetary support and media coverage. However, to be clear, indigenous people do not need to the support of colonizers to thrive. In fact, a victory was just won in Canada against the Trans Mountain Pipeline. Indigenous people don’t need non-indigenous people to thrive, but it’s crummy form to extend support and then to develop amnesia about the urgency of the causes one supported.

Indigenous rights and causes are of the utmost urgency, and our cultural pull towards treating indigenous people as our personal spiritual guides is blinding us to this fact. There is a difference between supporting a cause because of your personal sense of morality and searching for your morality in a cause. The former is useful while the latter can be extremely exploitative.

Standing Rock’s call for us to care for the earth was not an abstract concept, but a life-saving effort to prevent the extinction of humanity. The indigenous fight for sovereignty is not a mythological battle, but victory that would set a human rights precedent benefitting the whole world.

The High Holidays are a time for reflection, a time for contemplating our responsibilities to the people around us and our commitment to improving our society. As we go into this time, I am calling to us to reflect upon our motivations and actions as allies to the indigenous community.

Are we uplifting the voices of indigenous people or obscuring them? Are we committing ourselves to indigenous causes for self-gratification or because we want to correct wrongdoing?

If people simultaneously feel both entitled to the native struggle and removed from it, real change cannot occur. You cannot help those who you do not respect. You cannot change that which you refuse to see.