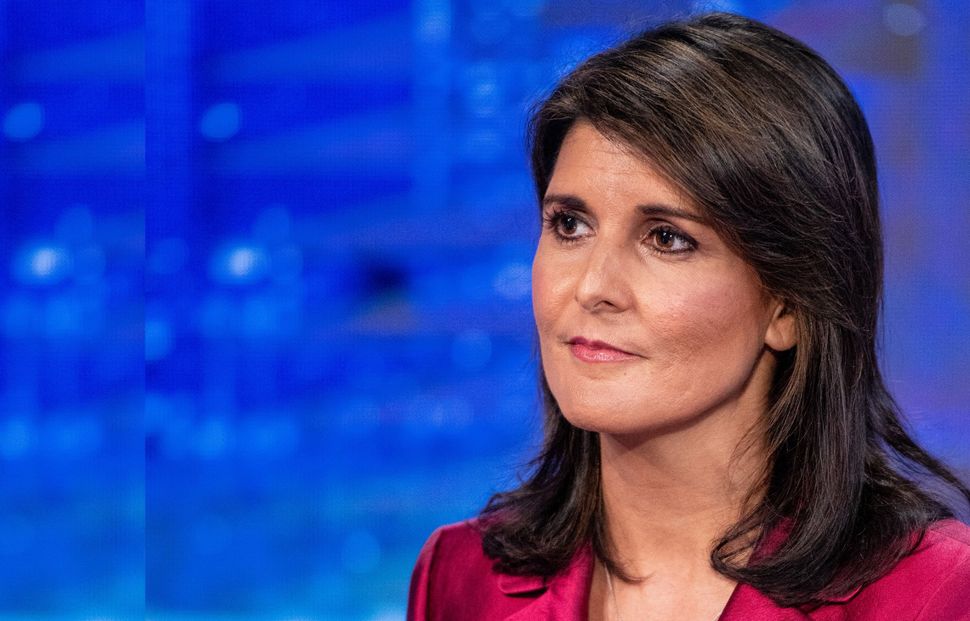 U.S. President Donald Trump announces that he has accepted the resignation of Nikki Haley as US Ambassador to the United Nations, in the Oval Office on October 9, 2018 in Washington, DC. President Trump said that Haley will leave her post by the end of the year. Image by Getty Images

“I wear heels, but it is not a fashion statement,” U.S. Ambassador to the UN, Nikki Haley, said at the AIPAC Policy Conference last year. “It is because if I see something wrong, I’m going to kick ‘em every single time.”

This is perhaps the most iconic statement made by, arguably, the most pro-Israel U.S. Ambassador to the UN. I still remember how Israeli reporters covered her first press conference after her first UN meeting. She looked confused, unsure of what had just taken place, almost saying to the viewer with her eyes, “Do you realize what’s going on there? They’re nuts!”

For the vast majority of the Jewish community both in the Diaspora and in Israel, the mother of dragons, aka U.S. Ambassador Nikki Haley, meant hope. Hope that in this international organization, where anti-Israel and often anti-Semitic animus is far too common, we had a fighter for justice.

From telling the Palestinian representative to the UN that she will not “shut up” to announcing the US’ withdrawal from UNESCO, and repeatedly stating that UNRWA and every UN body has failed to show genuine interest in promoting peace, versus solely bashing the only Jewish state — Haley was always our hero.

Haley’s resignation comes as a surprise to us all, and we can only guess what great things the future holds for her. During her time at the UN, she has promoted groundbreaking initiatives and has consistently upheld the strong values of freedom and equality through her work. She became a symbol for the Jewish people — we always felt that as an American woman of Indian descent, she knew what we were going through.

She saw the bias and the hatred against us at the UN and around the world, and she never let it go unchallenged.

Haley fought to reform the UN and to ensure that the body will be what it was meant to be. I am sure that she was not happy to withdraw from UN bodies or to defund UN organizations, but she fought against a darkness that had spread over the organization, that made its members stray from the organization’s founding principles.

The UN used to be that one light for people around the world, the hope for the oppressed, assuring them that they are not alone. But Haley saw one UN body after another ignoring truly oppressed communities that are in desperate need of international intervention and support. She had to do what was right and to use power to fight powerful countries when diplomacy failed, and she had to fight the unwarranted bias against the Jewish state that fills the halls of the UN.

It will be hard to fill her shoes, but even harder to find someone to kick with them, as she did.

Ambassador Haley, thank you — we will never forget all that you have done for us.

Hen Mazzig is an Israeli writer, public speaker and strategic communications consultant from Tel Aviv. His company was hired by The Israeli Government Advertising Agency as a consultant in 2017 and in March-May 2018 to advise on campaign to combat antisemitism as well as campaign that included LGBTQ issues. Follow him on Twitter @HenMazzig.