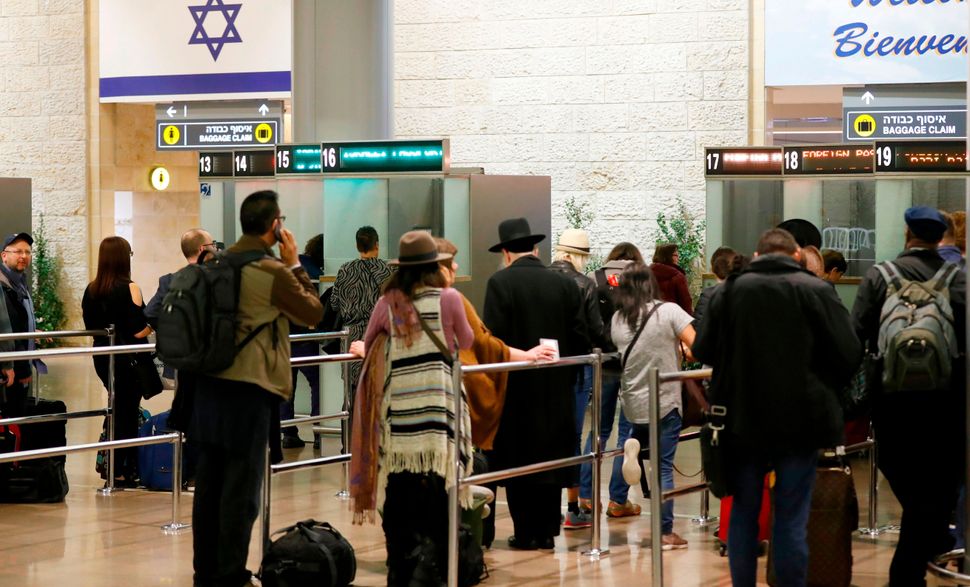 When I was detained at Ben Gurion airport in August, Benjamin Netanyahu apologized. So why isn’t he apologizing to Lara Alqasem? After all, I was only detained for an hour; she’s been detained for a week. I was allowed into the country; she’s facing deportation.

One answer is that while at the University of Florida, the 22-year-old Alqasem participated in a group that supports boycotting Israel. That runs afoul of a law Israel passed last year granting authorities the right to bar people active in pro-boycott organizations from entering the country.

But that same law also gives Israel the right to bar people who publicly call for boycotting only Israeli settlements in the West Bank, something I’ve done.

I’m as guilty as her. Perhaps more so because Alqasem now denies that she supports boycotting Israel at all while I still proudly scour the labels at my local wine store to make sure I’m not buying vino from the West Bank.

The more honest answer is that Alqasem is a Palestinian-American and I’m an American Jew. And the Israeli government assumes that when it comes to Americans of Palestinian, Arab or Muslim descent, its actions won’t garner much attention from the American press or much outrage from the American government. It can do pretty much whatever it wants.

That assumption, sadly, is correct.

Because of its man-bites-dog quality — because American Jews aren’t usually hassled at Ben Gurion — my detention garnered a story in The New York Times.

Alqasem’s story is deemed less newsworthy because it’s less unusual. The Arab American Institute has chronicled hundreds of cases of Arab American visitors to Israel “being detained for hours of questioning; being denied entry and forced to purchase a ticket to return home; being forced to surrender their American passports and made to secure, against their will, a Palestinian ID document; being denied permission to exit; being strip searched; or having their possessions stolen or deliberately destroyed by Israeli airport inspectors.”

The United States government actually tells Palestinian and Arab Americans to expect to be hassled when entering Israel. In 2008, the State Department noted that “American citizens whom Israeli authorities judge may be of Palestinian origin are likely to face additional, and often time consuming, questioning by immigration and border authorities.” In 2015, it declared that “the US government remains concerned at the unequal treatment that Palestinian-Americans and other Arab-Americans receive at Israel’s borders and checkpoints.”

But that concern doesn’t translate into meaningful pressure. The Arab American Institute’s James Zogby has presented American officials with “documentary evidence” about the abuse dished out to Arab and Palestinian Americans entering Israel. The response: “my government has shrugged its shoulders as if to say ‘We tried. There is nothing more we can do.’”

That’s Alqasem’s problem: In both the American press and the American government, Israel’s mistreatment of Palestinian and Arab Americans is so normalized that it elicits merely a shrug.

There are a couple of problems with that logic. First, even if it were true, liberal democracies shouldn’t engage in racial, religious or ethnic profiling because it’s a form of collective punishment. Rather, they should scrutinize individuals who, as individuals, have acted in such a way as to suggest they pose a greater threat.

Imagine that the United States gathered evidence suggesting that Israeli visitors to the United States are more likely to commit crimes than Swedish visitors, and then decided to routinely question Israeli tourists for hours, often going through their cell phones and laptops, while Swedes were waived on through. The Anti-Defamation League would go nuts.

Besides, it’s far from clear that Palestinian or Arab Americans do pose a greater threat of violence in Israel than American Jews. Between January and April of this year, the United Nations Office for the Coordination of Humanitarian Affairs recorded 84 acts of violence or property damage by settlers against Palestinians in the West Bank. The number is likely far higher. Because Israel punishes settlers for violence so rarely (according to the Israeli human rights group Yesh Din, only three percent of Israeli police investigations of ideologically motivated crimes by Israeli Jews against West Bank Palestinians resulted in convictions between 2005 and 2017), many Palestinians don’t bother to report settler attacks. Even when Yesh Din itself had documented an attack, only about four in ten Palestinians in 2016 reported it to the Israeli police.

According to Oxford lecturer Sarah Hirschhorn, author of City on a Hilltop: American Jews and the Settler Movement, American Jews constitute a disproportionate share of the settler population. So if Israel singles out Palestinian-Americans like Alqasem for scrutiny because they supposedly pose a threat of terrorism, why shouldn’t it also single out American Jews traveling to settlements in the West Bank? Or at least those traveling to settlements like Yitzhar that are known for being particularly violent.

The answer is obvious: Because settlers would cry discrimination. And since settlers — unlike West Bank Palestinians — are Israeli citizens, their voices carry more weight with the Israeli government. They carry more weight with the American government too. America’s current ambassador to Israel, David Friedman, served for many years as the head of a charity that raised money for the settlement of Bet El.

The abuse of vulnerable people often hides in plain sight. Many women — and some men — knew how prevalent sexual harassment and assault were in the United States. But until a mass movement changed America’s political culture, many abusers enjoyed impunity. (Some still do).

It will take another mass movement for justice to end the impunity that allows Israel to detain Lara Alqasem, and the double standard that makes my detention a bigger story than hers.

I hope it comes speedily, in our days.