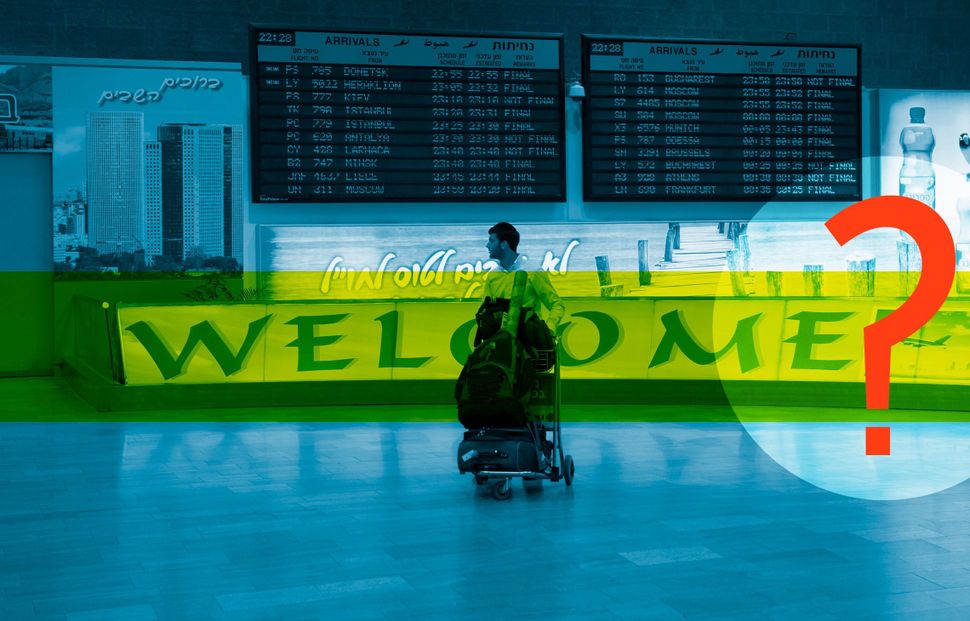 Like many Jewish parents, I try to create memorable Jewish experiences for my kids. Last weekend I can say, with some confidence, that I succeeded.

The weekend started on Rhodes, the Mediterranean island on which my maternal grandmother’s family spent more than four centuries following their 15th century expulsion from Spain. We travelled there for my mother’s seventieth birthday, and the trip culminated on Friday night when I led Kabbalat Shabbat and Maariv services at the island’s lone surviving synagogue. My ancestors might have found my Ashkenazi tunes jarring. But when I descended the bimah, my kids ran to me, and I knew it was an experience we would not soon forget.

Then, on Sunday, we flew to Israel for my niece’s Bat Mitzvah, where I was detained and interrogated about my political activities at Ben Gurion airport. We won’t soon forget that Jewish experience either.

It began when we handed our passports to the official at security. He breezed through the passports of my wife and two kids, then looked at mine and made a call. After hanging up, he asked me—for reasons I can’t explain—the names of my father and grandfather. Then he asked me to step aside for extra screening.

Our family entered a modest room filled with Israeli tourist photographs and a widescreen television playing the Israeli news. Three Asian women sat quietly. Later, a young man with a beard, a tall black man and an elderly couple—none of them speaking Hebrew—came and sat down too. My son and I debated the relative merits of him preparing the Devar Torah for his upcoming Bar Mitzvah or playing games on his phone.

After a while another security official, a middle aged man with closely cropped hair, escorted me alone to a small room and took a seat behind a desk. He asked why I was in Israel and I told him about the Bat Mitzvah. He asked who I know in Israel and I mentioned two families that have recently returned to the country after attending my kids’ Jewish day school in New York. I got the feeling these weren’t the answers he wanted.

Then he told me that on my last trip to Israel I had participated in a protest, which is true. He asked where it occurred and I answered “Hebron.” He asked its purpose and I answered that we were protesting the fact that Palestinians in Hebron and across the West Bank lack basic rights. (I wrote about the protest at the time). He asked how I had become involved in the protest and I mentioned The Center for Jewish Nonviolence. He asked if the Center had incited violence, and I replied that, as its name suggests, it practices non-violence. My interrogator then replied that names could be misleading. The government of North Korea, he observed, calls itself a democracy but is not. I told him I didn’t think the Center for Jewish Nonviolence and the North Korean government have much in common.

I don’t remember all the dialogue that followed but two things stand out. First, my interrogator never offered any legal basis for my detention. A recently passed law permits Israel to bar entry to people who advocate boycotts of Israel or Israeli settlements in the West Bank—and I have done the latter. But my interrogator never mentioned boycotts.

What he did do was ask, again and again, for the names of objectionable organizations I was associated with. His definition of objectionable, however, kept changing. At one point he asked about groups that incite or provoke violence. At another he asked about groups that threaten Israeli democracy. At another he asked about groups that promote anarchy. Then he simply asked if I was connected to any organization—or involved in any activity—that he should be concerned about. I laughed and told him that if I thought he should be concerned about it I wouldn’t be involved. But his imprecision was telling: He established no consistent or objective standard for my detention. His standard was whether I planned to cause trouble—trouble meaning whatever he and his superiors wanted it to mean.

Finally, I asked him why a democracy should object if people peacefully protest. He responded that if he came to the United States to protest America’s occupation of native lands, the United States government would put him on the first plane back. That’s not true, I began to insist. Then I realized that with Donald Trump as President, I couldn’t be entirely sure. I wonder how many other security officials across the world are similarly emboldened by the realization that America’s president doesn’t believe in the principles of free expression that America’s Constitution is supposed to protect.

The session ended when my interrogator asked me, point blank, if I was planning to attend another protest. I answered truthfully: No. With that I was sent back to the holding room.

The conversation was depressing but not frightening. I never felt scared or victimized. I’m a white American Jewish journalist with influential Israel and American Jewish friends. My situation wasn’t remotely comparable to the black, brown and non-Jewish visitors with whom I shared the holding room. I may not have felt protected by Israeli law but I felt entirely protected by my national, religious and class privilege.

My moral dilemma lay in how to use that privilege. Before the trip I had asked friends at the New Israel Fund what to do if I were detained. They had generously put me in touch with the renowned Israeli human rights lawyer Gaby Lasky. Upon returning to the holding pen I knew that by calling Lasky and asking her to intervene, I could likely end my ordeal—something the people sitting around me could not do. I looked at my wife—who would not leave me and as a result was about to miss the first evening of Bat Mitzvah activities for her sister’s daughter—and made the call. A few minutes later I was free. The whole experience took just over an hour.

My detention is one more, not particularly significant, example of how Trump has emboldened Netanyahu. An Israeli government led by men who respect neither liberal democracy nor the rule of law now knows it has kindred spirits in Washington. A week before my detention, something similar happened to my friend and former colleague Simone Zimmerman. The day before, Netanyahu all but incited violence against the New Israel Fund’s director in Israel. The month before, his government pushed through a Nation State law that downgrades the legal status of Arabic and limits the ability of human activists to speak in Israeli schools.

Israel, like America, is getting uglier. And yet I can’t imagine not coming here. I’ll keep doing so until they bar me outright. When I left the interrogation, my kids ran to me and I realized: This too was a Jewish experience to remember. Our family went to Rhodes to honor the Jewish past. We went to Israel to celebrate the Jewish future—the coming of age of a new generation of our family. And by detaining me, the Israeli government reminded us that if we want to be proud of that future, we’ll have to fight for it.