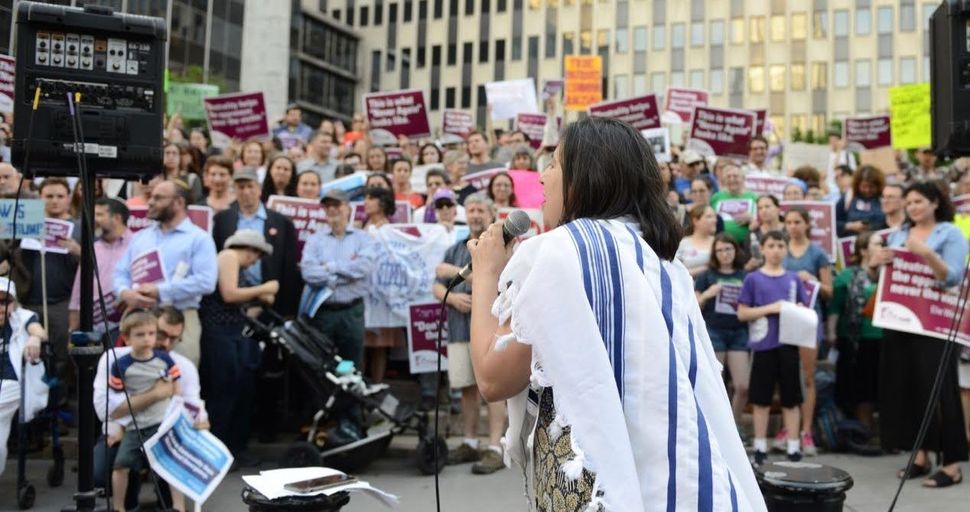 In this week’s Forward, Editor-in-Chief Jane Eisner looks for “a prophet who will speak out as a Jew.” She looks first for an elected official who will bring moral leadership to Washington, and then reminisces about prominent Jewish leaders from outside of the halls of Congress. “Where is our Abraham Joshua Heschel today?” she asks.

This is precisely the wrong question.

The classic model of the one brave charismatic leader—usually a man—may be convenient for media, but it is the wrong model to lead us out of the morass in which we find ourselves today. Instead, we need — and indeed, we have — many leaders bringing a collective moral voice to the crises of the moment.

Many of us grew up with the iconic photo of Rabbi Abraham Joshua Heschel and Reverend Dr. Martin Luther King, Jr. marching arm in arm. That photo continues to inspire, as do the words and actions of both of these religious leaders. Their teachings remain deeply and painfully relevant, especially in this moment. I personally go back to Heschel’s writings often, for a powerful model of seeking justice from the depths of Jewish tradition.

But we can revere these two men without trying to replicate their leadership model.

First of all, religious leaders today come in all genders. Those looking for “the next Heschel” most often envision an old man with a beard preaching from on high, then leading his flock to march. That means looking for leadership only among those who fit this archetype, and potentially missing many other leaders — who, today, come in many races, genders, and ages.

To her credit, Eisner, who has long championed women’s leadership, does include Representative Gabrielle Giffords on her short list of four people whom she views as exemplifying prophetic leadership.

But even if we can imagine a woman as the next Heschel, the top-down paradigm is, itself, inherently masculine. Thankfully, the entrance of women and non-binary people into religious leadership has also introduced more dispersed and collective models of shared leadership.

When, for example, the Black Lives Matter movement emerged, many confused onlookers asked where the leader was, or sought to cast one or another prominent figure as the leader. But the movement, founded primarily by queer young women of color, defined itself from the beginning as a leaderful movement, rather than one dependent on a single figurehead. This dynamic confused those looking for the next King. But this more diffuse approach allowed the movement to grow in ways that dependence on one hero figure would not, including by allowing for loosely-linked grassroots groups to sprout up around the country.

It’s easy to understand why we look for one leader. We want to know that someone has the answers, and that someone will shepherd us in the right direction. But Daddy can’t save us. We have learned too many times from history that movements built around a single charismatic leader rarely live up to their potential. The sole leader inevitably turns out to be flawed, burns out, irritates some followers or potential followers, or dies.

The Torah teaches us this lesson over and over through the story of Moses, who struggles as the sole leader of the Jewish people. When he lingers too long at the top of Mount Sinai, the people give up hope and turn to idol worship. When the people go astray, Moses complains to God that he cannot handle their burden on his own. And indeed, Moses succeeds best when he shares leadership with others—whether relying on his siblings, Aaron and Miriam, to liberate the Israelites from slavery, or appointing others to judge or to prophesy alongside him.

In fact, Heschel and King themselves did not lead alone. Thousands of people organized and mobilized to build a successful movement. And yet, people somehow always seem to come looking for the figurehead. “Where is our Abraham Joshua Heschel today?”

It’s possible, of course, that the next Heschel is someone currently being overlooked. After all, in his day, the Jewish establishment—and even his own academic institution— regarded Heschel with significantly less warmth than the posthumous tributes might suggest.

But more likely, there’s no one Heschel because we don’t need a single moral leader. As the leader of T’ruah, I have borne witness, especially over the past two years, to the courage of the 2000 rabbis and cantors in our network, who are precisely the moral and prophetic voices we need in this moment. Eisner mentions, though quickly dismisses, the “rabbis who sermonize and galvanize against injustice, racism, sexism, Islamophobia,” In fact, collectively, these leaders are today’s Heschel. And despite Eisner’s desired for an elected official who will act as a moral leader, such leadership more often comes from religious communities rather than from the halls of power.

Just in the past few months, dozens of rabbis have traveled to the border to witness the detention of asylum seekers and the separation of families. Many more have rallied their own communities to protest, to host refugee families, and to turn their own synagogues into sanctuary congregations. We have seen rabbis speak powerfully about the Trump administration’s attacks on truth, on media, and on the institutions that sustain American democracy. Many have called out the Netanyahu administration for its march toward illiberal democracy and its continuing disregard for the human rights of Palestinians, asylum seekers, and even Israeli Jews who don’t toe the government line.

In their own pulpits, in interfaith settings, and in traditional and social media, these rabbis constantly draw on Torah to “call out the ethical and moral rot emanating from our nation’s capital and eating away at the fabric of civic life,” in Eisner’s words. Taking positions such as these requires significant risk, often including losing donors or members who want to be affirmed, not challenged.

You may never hear about some of these individual rabbis. Many are prominent in their own communities, even if they never make national headlines. Most direct their attention to leading from within local communities, rather than seeking photo ops and national fame. Some have beards, but most do not. And they are all moral leaders.

The power of their leadership lies in the strength of thousands of rabbis and cantors in their communities and in the streets, together with lay leaders, and ordinary Jews, who are bringing the moral power of our tradition alive by responding to this moment as Jews. Today’s Heschel is everywhere—and nowhere—and that’s exactly as it should be.

Rabbi Jill Jacobs is the Executive Director of T’ruah: The Rabbinic Call for Human Rights.