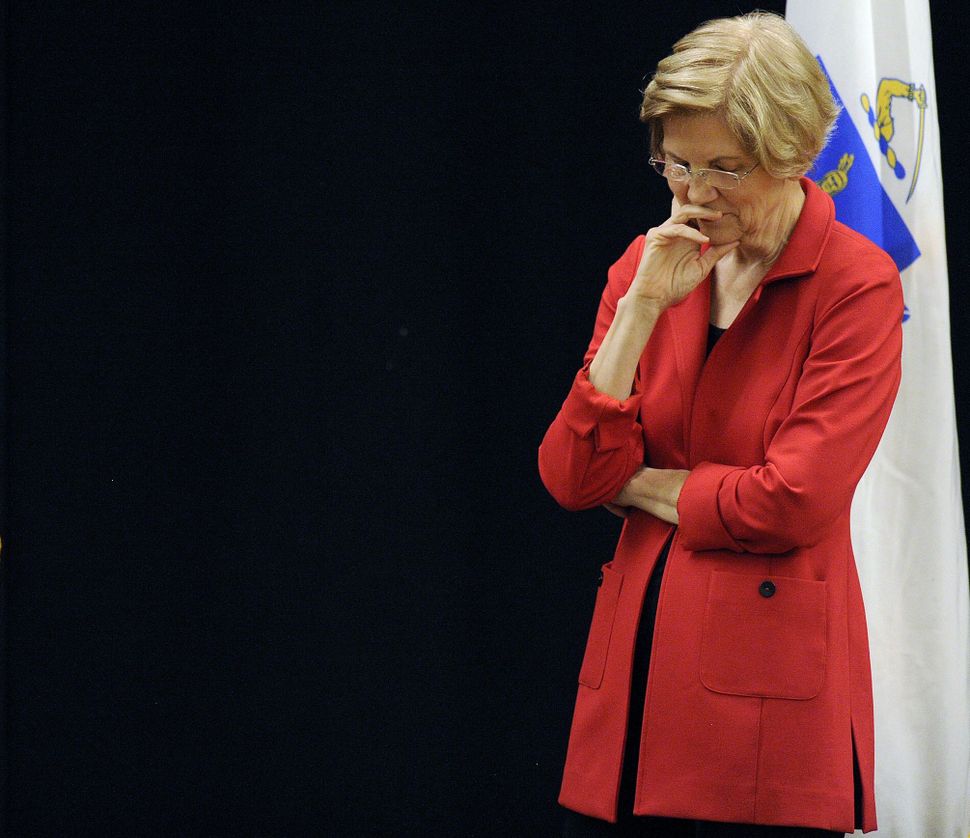 DNA is not identity. We aren’t our genetic markers.

That’s the message Native American writers and activists have been trying to convey to Massachusetts Senator and likely 2020 presidential contender Elizabeth Warren. But it’s a message Jewish people at this moment could stand to hear as well.

Elizabeth Warren, a white woman, has in the past claimed Cherokee identity. She had her ethnicity recorded as Native American on some official documents as an academic in the 1980s and 1990s, though she did not get scholarships or placements based on being Native American, as some political opponents have claimed.

Republicans, and particularly Donald Trump, have attacked Warren for falsely claiming to be Cherokee. Warren responded this week by releasing the results of a DNA test that shows she had some Native American ancestors.

My family (including Fox News-watchers) sat together and talked about what they think of @realDonaldTrump’s attacks on our heritage. And yes, a famous geneticist analyzed my DNA and concluded that it contains Native American ancestry. pic.twitter.com/r3SNzP22f8

The problem here is that Native American identity isn’t based on DNA. Even though Warren appears to have had a Native American great-grandparent, that doesn’t mean she’s entitled to call herself a Native American. Cherokee Nation Secretary of State Chuck Hoskin released a statement explaining that “Sovereign tribal nations set their own legal requirements for citizenship, and while DNA tests can be used to determine lineage, such as paternity to an individual, it is not evidence for tribal affiliation.”

Warren wasn’t claiming tribal affiliation per se, but she did use the DNA test to claim that Trump was wrong to deny her Native American ancestry. “Using a DNA test to lay claim to any connection to the Cherokee Nation or any tribal nation, even vaguely, is inappropriate and wrong,” Hoskin said.

Native American identity, many Native writers have emphasized, is about community and citizenship. It isn’t about ancestry, or some kind of inherited biological racial marker.

The clarity here is notable and admirable—and it stands in sharp contrast to current Jewish uncertainties around ethnicity, community and DNA.

Many of these uncertainties involve Israel. Jewish legitimacy in Israel is often based on a claim of Jewish indigeneity; that is, Jews are indigenous to Palestine, and therefore have the right to a nation state there. This argument in turn relies on a claim that ancient Jewish people and the people living in Israel now are one people and share a common ethnicity.

Genetic science has often been enlisted to bolster this assertion of indigeneity. Israel has even been considering using genetic tests to determine whether immigrants are Jewish, and therefore whether they have an automatic right to Israeli residence and citizenship. The Prime Minister’s office announced back in 2013 that people from the former Soviet Union wishing to immigrate to Israel could be subjected to DNA testing to prove their Jewishness.

There are serious problems with using DNA as evidence of Judaism, though. First of all, the tests may be wrong, in the sense that they may fail to capture the actual complicated social, cultural and historical experience of Judaism.

DNA can’t capture Jewish converts, for example, who are likely to be marginalized in a community which prioritizes genetic heritage.

And DNA tests may miss or erase non-traditional Jewish communities with complicated histories. This was illustrated when a Russian teen was told she could not participate in a Birthright trip to Israel without an expensive DNA test that she could not afford.

Using DNA to determine Jewishness is also unsettling because it plays into Nazi arguments that Judaism is a distinct race. Hitler insisted that converts from Judaism were still racially Jewish. If he had had DNA tests, he certainly would have used them to find people with Jewish ancestors and murder them.

As it is, DNA evidence has been used (badly) to argue that Ashkenazi Jews are especially intelligent — a claim that fits neatly into anti-Semitic stereotypes about crafty and conniving Jews.

There are many differences between Native American and Jewish identities, of course. Native American identities are frequently and eagerly adopted by non Native Americans in an effort to cast themselves as authentic and interesting, with the result that the existence, and needs, of Native peoples and Native nations are systematically erased.

Jewish identities are rarely subject to this kind of appropriation. Even Julia Salazar, whose bid for state senate made headlines this summer when her claim to be Jewish was contested, was mostly criticized for having lied, rather than for the dangers of appropriating a Jewish identity which Salazar, as a convert, had a right to claim in any case.

Those dangers aren’t entirely different, though. DNA tests take the ability to define a community away from those who belong to it, and hand identity over to a supposedly objective science. Worse, that “science” is linked to a history of racist ideas and preconceptions.

Both Native people and Jewish people have suffered greatly because of scientific beliefs that identity is innate, genetic, and inescapable.

DNA tests have the potential to be a new twist on the old idea that scientists understand marginalized people better than they understand themselves. And when science thinks it owns your identity, the next step, historically, has often been genocide.

Native Americans have seen this danger clearly, and as a result have taken a clear stand against ethno-nationalism. Jewish people, though, have been more conflicted.

But we shouldn’t be. Elizabeth Warren’s use of her DNA test, and the Cherokee response, can serve as a reminder of the dangers of locating Judaism in our genes, rather than in our histories and our communities.

Noah Berlatsky is the author of “Yet Another Heart of Darkness: American Colonial Films.”