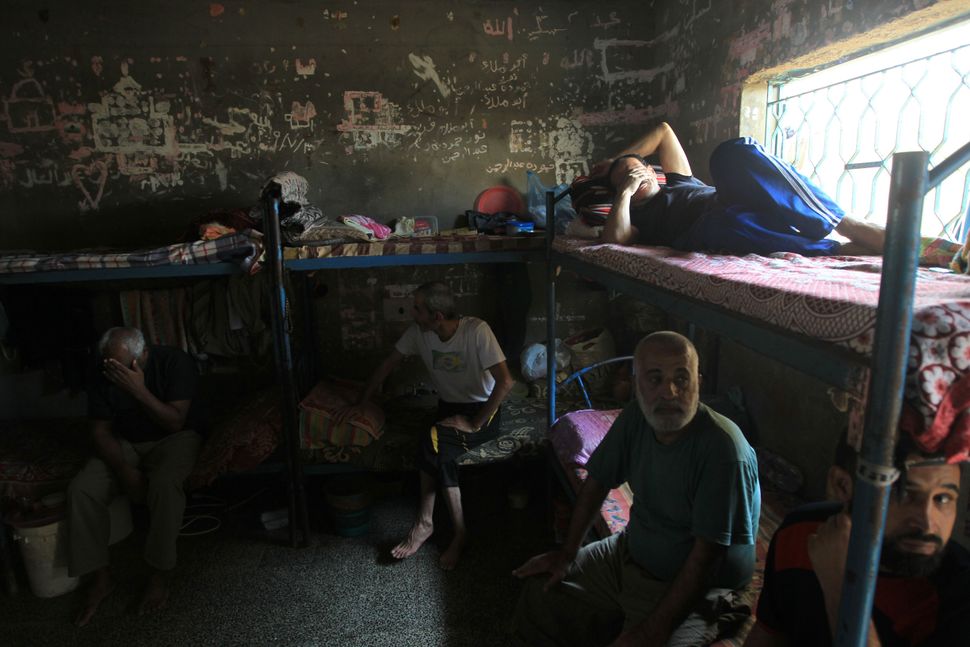 Palestinian prisoners sit in their cell in the Hamas-run Ansar prison in Gaza City on October 4, 2012. The jail holds prisoners convicted of all types of offenses. Human Rights Watch accused Gaza’s ruling Hamas movement of ‘extensive’ rights violations, including torture, warrantless and arbitrary arrests, and unfair trials. In a report entitled ‘Abusive System: Criminal Justice in Gaza,’ the New York-based watchdog alleged that Hamas security services also failed to inform relatives of the whereabouts of detainees, and had arrested and abused lawyers. Image by Getty Images

My first time visiting a Hamas operated police station prison was unforgettable. A rusty blue-colored gate led to a narrow corridor that bifurcated into two depressing, colorless rooms. Inside, tens of people were sitting in the corners of each room on a cold floor or a few rotting mattresses.

It was the middle of winter, and the shivering inmates had no food or blankets, no watches to know what time it was or any means to burn the countless hours of waiting — except for taking turns bursting into tears, or echoing each other’s grievances of how unjust it was that they were here.

A recently-released Human Rights Watch report painstakingly documents the torture my people face at the hands of the Palestinian Authority and Hamas.

Many on the Israeli right have used the report as an opportunity to place the blame for Palestinian suffering squarely on our own shoulders rather than accept any responsibility for our plight. Member of Knesset and head of a major party Yair Lapid accused the international community of “absurd hypocrisy when it comes to the Palestinians.”

The Palestinian Authority and Hamas systematically torture their own people, abuse journalists and suppress free speech. The silence of the international community is further proof of the absurd hypocrisy when it comes to the Palestinians.https://t.co/86vU90zcfB

Israeli diplomat Dan Poraz linked to the report and accused those who support the Palestinian cause of having “an insincere concern for ‘human rights.’

Whenever support for the #Palestinian cause comes from an insincere concern for “human rights”, take a look at @hrw’s report about “routinely arrests and torture” committed by the Palestinian Authority against the Palestinian people. https://t.co/Cot4ygmi89

Israeli Ambassador to the UN Danny Danon used the report’s publication as an opportunity to lash out at the left-wing Israeli human rights group B’Tselem, whose director he called a collaborator on the international stage not two weeks prior.

A #HRW report exposes the PA and Hamas’ “machinery of repression” of arbitrary arrest & torture of political critics. Unfortunately, the testimonies from this report will not be heard in the #UN. Instead, it prefers the lies of B’Tselem’s.https://t.co/JX4kFIVG6q

But in claiming that anyone who cares about the Palestinians and even partially blames Israel for our suffering is a hypocrite, Israel’s right further exacerbates our situation, rather than addressing its roots.

This grandstanding diverts attention away from ending the Israeli-Palestinian conflict and instead blames inter-Palestinian politics.

But as anyone who has lived here knows firsthand, the situation is far more complicated. For us Palestinians, we are caught between a rock and a hard place, two governments that suppress our civil rights and Israel, which refuses to acknowledge them.

Anyone wanting to help the Palestinians must respond to both causes of our desperation.

The prisons run by Hamas that I observed were typical of prisons in a third-world country. What was the most depressing is the charges pressed against prisoners, and how normalized those charges were.

One man who I spoke with was a journalist who “misused technology.” Another was simply a “Palestinian Authority employee.” Another was a young lawyer who “insulted high authorities” in a moment of anger.

They had all been brought in to be “disciplined,” which means terrorized, humiliated and scared into submission.

Some of them had been imprisoned for days or months, or even years.

Some prisoners had been made to sign a pledge that they wouldn’t commit the same offense again, or else they’d be fined and imprisoned. Others signed such a pledge on behalf of family members, like the father of a female journalist who dared to cover “sensitive topics” thinking she couldn’t be detained for being female in a conservative society of kinship.

The highest security authority that always goes unquestioned for its detention, torture and persecution of fellow Gazans is the “internal security” department. Former Hamas detainees who spent time in Israeli prisons established the department.

Their intention seemed to be to recreate a version of Israel’s internal security service, the Shin Bet. They seemed to want to use all of the same techniques: Detention and “special methods” designed to contain and humiliate Palestinians under occupation in order to prevent unrest or the destabilization of the status quo.

The systems feed each other: While the Shin Bet is always recruiting collaborators and spies, Hamas’s internal security is always trying to capture them.

The individuals in internal security’s sights include most opponents to Hamas: Journalists and activists, whose actions might help destabilize the government, and even those with the audacity to run a pro-PA Facebook page. PA leaders and employees in Gaza are also systematically arrested, to retaliate against similar arrest campaigns by the PA in the West Bank.

The stories from those who have been imprisoned by the internal security could turn your hair gray. The unspeakable trauma of being tortured by your own people is compounded by the inability to share one’s story publicly after the fact.

All of these tactics cause immeasurable suffering to the Palestinian people. But we also know that if we speak up, Israel will only make matters worse.

“The catastrophe here is that whatever you say against Hamas or the PA, Israel will use against us,” a friend of mine said about his inability to express his frustration with Hamas in public.

And of course, Hamas uses Israel as its excuse for these abuses, which it carries out under the guise of “fighting the occupation” or fighting the “collaborationist” PA and its “intelligence recruits.”

Palestinians hide their domestically inflicted wounds as we strive to end the Palestinian division through reconciliation. Hopefully one day, we’ll put an end to the occupation and replace it with a genuine peaceful coexistence so that there will no longer be any excuse or pretext for such a repressive security apparatus to function.

Reconciliation might help bring back the democratic process of elections, so that Palestinian leaders would be held accountable to their constituencies. Elections would put a check on this unconstrained tyranny and make the people again visible to their leaders who might, only then, seriously care about what their people think of them.

But how could this reconciliation ever be achieved in light of Israel’s continued efforts to destroy Palestinian unity?

PA Chief Negotiator Saeb Erekat stated that when the PA signed the reconciliation accord with Hamas in 2014 to heal the divide, Netanyahu’s negotiating team withdrew instantly from the peace table, and the US issued a similar rebuke.

Using Palestinian suffering at the hands of our own government to score a cheap shot against their political adversaries is a great way to avoid the hard work of achieving real peace.

But the Israeli right’s investment in perpetuating Palestinian division makes them complicit in the regime of torture and oppression.

With continued Israeli veto over Palestinian unity, further physically and politically disconnecting and isolating Gaza from the West Bank, and even denying the international community full access to Gaza (including the very HRW team that wrote the report), Netanyahu’s policies enable the evils of the Palestinian regimes. Israel has abandoned us as easy prey to the unconstrained tyranny of a local regime which we have no means to change, and hence no voice to be heard.