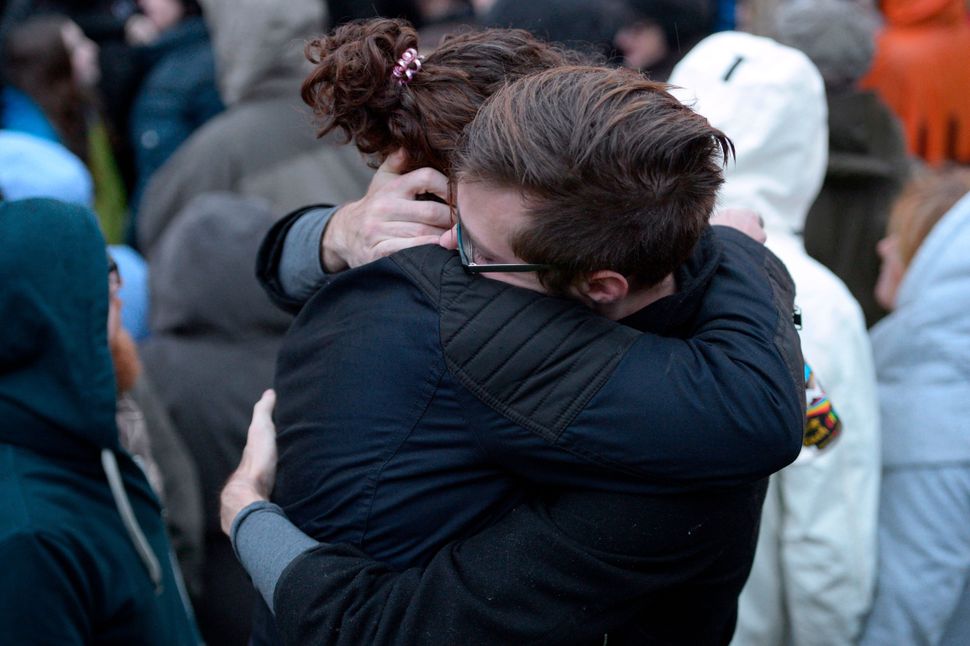 Grief. Darkness. Uncontrollable rage. These are the things consuming the American Jewish community today, the darkest day in our history in this country.

There is little surprise, but boundless, unending sadness and anger.

In a crisis, we often feel a desire to move. It’s flight or fight. It’s adrenaline. It’s evolutionary.

Today, I want you to sit. Sit Shiva with us for we are in mourning.

When Jews mourn, we invite the community to come into our home and mourn with us, to bring food and stories and community to a home that has been devastated by death.

Today, the entire Jewish American community is grieving the deaths in our family, and I’d like to invite America to sit Shiva with us.

Our situation has been growing more precarious for some time. The freedom that I felt in my youth seems to fade with each passing year. As anti-semitic incidents soared, we found few friends.

Today was the day we’ve known was coming since the Unite the Right rally in Charlottesville, Virginia. It was the day that we tried to pray away, the day we we warned of in our writing. The day that all of the hate crimes that were brushed aside warned of. The day when blood was shed.

While the shooter ultimately bears responsibility, for the loss of life, there are so many people who are guilty of creating an environment where hostility to American Jews flourished. In my mind, they are the shooter’s helpers.

I want them to sit Shiva, and sit still in their discomfort and shame. 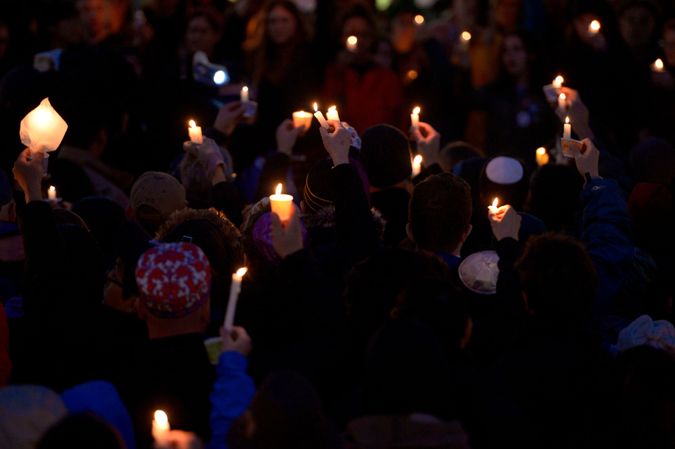 There are Americans who will sit with White Supremacy for political gain. We see you and you are not free from guilt.

We all fight dirty in Washington. It’s politics, after all.

That said, there are limits and many in the conservative movement have abandoned them all.

Those of you who sit with Steve King and Kris Kobach helped to create this. If you called the migrants seeking refuge in America “invaders” you helped create this. The shooter specifically mentioned the work of the Hebrew Immigrant Aid Society, calling it “sugar coated evil” before walking into that synagogue.

Anyone slandering George Soros and other prominent Jews helped create this.

President Trump helped create this with his endless fear-mongering, lies and his emboldening of hate groups around the world.

Those of you who sat beside white supremacy for political wins and for raw power have blood on your hands.

Sit with it a moment.

The far right has blood on its hands, but the left is not innocent. The social justice movement has failed us repeatedly over the past two years.

Those on the forefront of fighting hate did not see the gravity of the threat to Jewish Americans.

We were spoken over and ignored.

We were pushed out of movements, asked to leave marches, and told that White Supremacy was not a problem for Jews.

It’s cold comfort to see many on the left speak out against anti-Semitism and tie it to white supremacy for the first time.

You may not have blood on your hands, but you are not innocent. To those who spent the last two years telling us to be quiet, that we weren’t affected by white supremacy, that we were selfish, that we didn’t belong in Justice work, today should wake you up.

Listen to all historically oppressed people — not just those you are comfortable with.

Never again wait for death to legitimize the march against bigotry.

There are so many people in the justice movement who posted about anti-Semitism for the first time today. Honor our community by being better everyday.

America, sit shiva with us. Hold still for a moment before you move on to the midterms, or the next crisis, or the next thing on your to do list. Sit in this guilt, feel it and let it change you.

My beloved community: Today we mourn. Today we rend our garments and sit on the floor. Today we sit shiva.

We have gone from a bris to a funeral in a matter of moments and we will never be the same.

As Michael Twitty wrote, “We aren’t all the same, but we are all one people.”

We must take this devastating moment as an opportunity to come together, to sit together, to eat together. To talk — even if we agree on nothing.

The forces that seek to tear us apart, to have us at each other’s throats, do not seek anything holy. Disagree, loudly if you must, we are Jews after all.

Still, let’s sit together for the next seven days. Go to a shul you would normally mock. Talk to a Jew you think you have nothing in common with. Be together and donate together and pray together and remember we are all the same both in the eyes of God and the eyes of the white supremacist shooter.

When we read the Haggadah on Passover, we say out loud the words, “Through your blood, live.” Our blood has been spilled today. Let it bring us together and make our community more alive than it was yesterday. Let our resilience be be togetherness.

Through our blood, live, as one community under enormous threat. We will survive this, together.

In our darkest moments, in our grief, we can have each other if we choose to. We have an amazing, beautiful, diverse, infuriating, complicated, passionate, living community. Am Yisrael Chai. Through our blood, we will live.