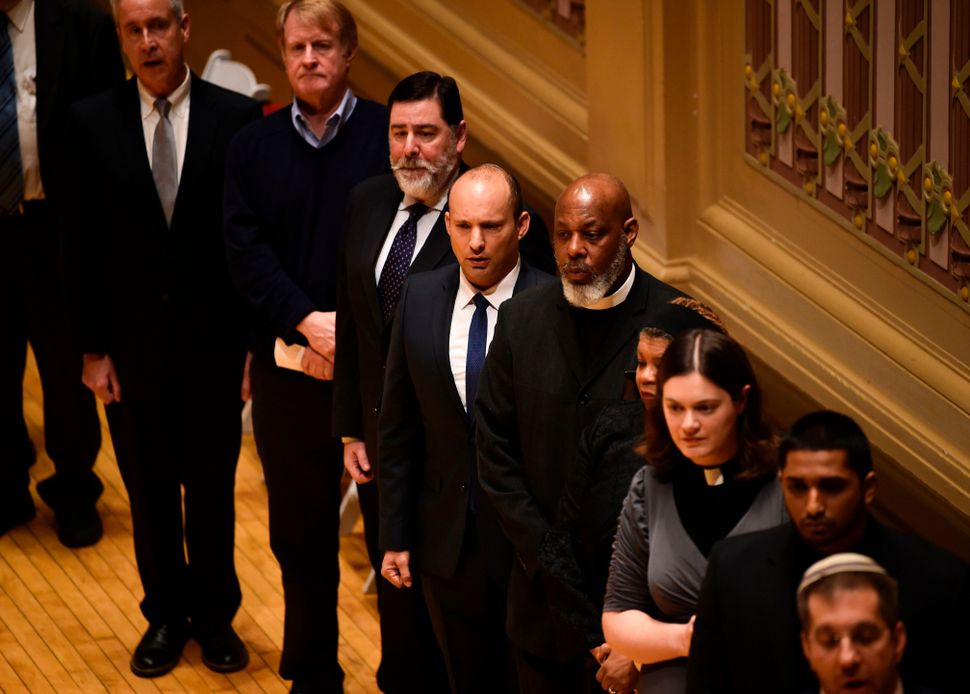 In the wake of the massacre that led 11 dead in a synagogue in Pittsburgh, Trump is making his way there despite 26,000 Jews who signed a petition that he stay away.

He’s not the only unwelcome politician to use the tragedy for a photo-op. The State of Israel sent Education and Diaspora Minister Naftali Bennett as the representative of the Israeli government to console the Jewish community of Pittsburgh.

Bennett, a divisive politician representing the extremist settler movement, was sent in the name of all Israelis. And so I, as an Israeli Jew, cannot be silent, even as I mourn and rage.

“When Jews are murdered in Pittsburgh, the people of Israel feel the pain,” Prime Minister Benjamin Netanyahu declared.

And yet, this expression of solidarity with the Jews of Pittsburgh as dead Jews comes from a man who has consistently refused to celebrate how the majority of American Jews live and what they believe in.

The murderer was motivated by his hatred of Jews and refugees, and he singled out HIAS, the venerable Jewish refugee organization, as the symbol of both. He attacked Jews as Jews, but also as the defenders of the weak, the stranger, the poor, the orphan, and the immigrant. And whatever their actual beliefs, the Jews in Pittsburg were murdered as representatives of those values, handed down to us at Sinai.

But Bennett is no believer in these values. He supports the deportation of African asylum-seekers in Israel and openly pressured Netanyahu to cancel a deal that would have allowed thousands of them to stay in the country. On Sunday, the government [decided] (https://www.timesofisrael.com/congo-migrants-face-deportation-after-israel-revokes-group-protection/) that Congolese citizens in Israel have until January 5, 2019, to leave Israel, or face “enforcement measures.”

It is a particularly bitter irony that in Israel, HIAS is at the forefront of helping refugees from African countries.

“From Sderot to Pittsburgh, the hand that fires missiles is the same hand that shoots worshippers,” Bennett declared. Simplistic, false and misleading equivalencies aside, this is a statement for Bennett’s hardline constituency at home. The Pittsburg murderer is a white American Christian, but Bennett wants to stir up the anti-Arab emotions at home that support his party.

Bennett did not mention that crowdfunding campaigns organized by Muslims in the US have raised hundreds of thousands of dollars for the victims of Etz Haim. Rather than emphasizing unity among those of us who seek a better world, he not-very-subtly played to underlying Islamophobia – and did not mention, for example, that the Islamic Movement in Israel issued, in Hebrew, English and Arabic, a strong condemnation of the “barbaric attack” and wrote that “This attack on a house of worship makes the crime even worse.” As Muslims in the US, Israel, and the world join all faiths in the struggle against hate and bigotry, Bennett chose to be divisive.

Some Jews in Pittsburg have made it clear that they are angry with President Donald Trump for spreading divisiveness instead of unity. “We all knew the rhetoric of hate could lead to this kind of situation,” Rabbi Arron Bisno, who leads a Reform synagogue in Pittsburg, told Haaretz. These Jews have made the connections between violence atmosphere that leaders foment and the violence; they know that hate speech weaponizes extremists even further.

Sadly, Bennett seems to either not know or care. His own party, The Jewish Home, has run virulent campaigns in Israel’s municipal elections, warning Jewish voters that “only the party of the Jewish Home can protect Jewish Ramlah” — a mixed Arab-Jewish city near Tel Aviv — under the picture of a young woman dressed in a hijab, is the line, “TOMORROW THIS COULD BE YOUR DAUGHTER.”

The Jews who were viciously murdered at Etz Haim were murdered because they were Jews. But we also know that all bigotries intertwined, and that racism, bigotry, and anti-immigrant sentiment will always find an expression in anti-Semitism.

And so it is incumbent upon us as Jews, for self-preservation and because of our ethical commitments, to fight against these ills.

Bennett chose to promote Jewish particularity at a time when the rest of us are trying to find a balance between the particularity of our pain and the universality of love and acceptance.

Yes, I know that there will be many who will say that I am the one politicizing Pittsburgh; that I and my ilk are the ones who are turning this horrific event into a political rally, making crass political gains for the left when the pain is still so raw.

But hypocritical platitudes about “we are all together” and “the unity of the Jewish people,” are no less political. How can the Jews of Pittsburg be consoled by an emissary of the Israeli government that rejects their identity and their values?

I wish this were a time for silent tears. Instead, it is a time to mourn and to recommit, in Israel and in the US, our Jewish values and to inclusivity, and to join others in the struggle for a better world.

That is how we can truly honor the deaths – and celebrate the lives – of the 11 victims of the Etz Haim synagogue.

Eetta Prince-Gibson, who lives in Jerusalem, was previously Editor-in-Chief of The Jerusalem Report. She is the Israel Editor for Moment Magazine and a regular contributor to Haaretz, The Forward, PRI, and other Israeli and international publications.