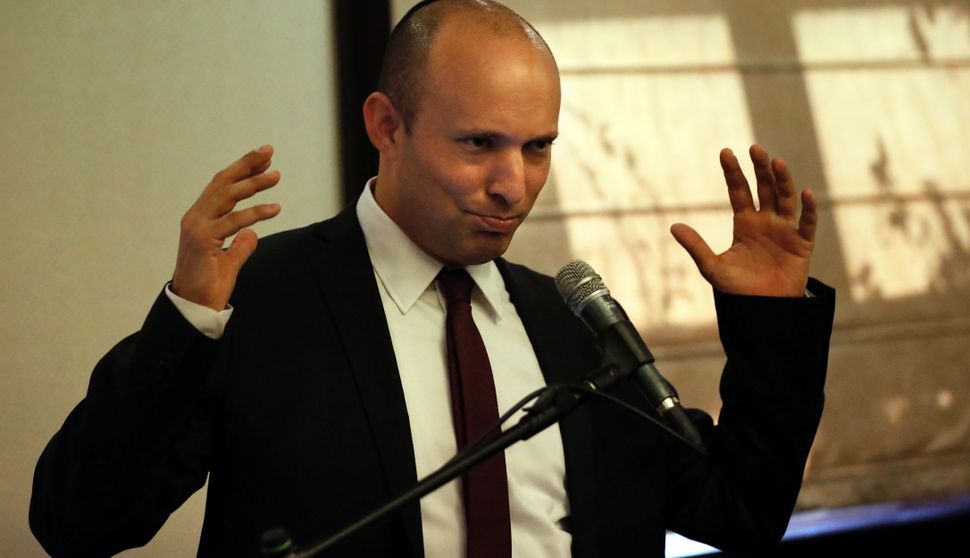 Among the many inversions of the Trump presidency, perhaps none is weirder than the spectacle of Naftali Bennett, the ultranationalist Israeli Diaspora Affairs Minister, downplaying anti-Semitism.

Up until now, Bennett seemed to see anti-Semitism rising everywhere around him: in Poland, to which he cancelled a trip in February; in the BDS movement, which he called “a new name for an age-old strategy: demonizing and delegitimizing the Jewish people”; in the very internet itself, for which he created a new cyber-monitoring system that finds “an average [of] 10,000 anti-Semitic posts per day.”

And then, on Wednesday, four days after an avowedly Jew-hating man slaughtered eleven Jews in a synagogue in the largest anti-Semitic attack in American history, suddenly Bennett discovered the virtue of restraint.

Speaking on a panel at the Council for Foreign Relations, he said he was “not sure there’s a surge in anti-Semitism in the United States” and expressed skepticism about the Anti-Defamation League’s (ADL) recent report, which found a massive increase in anti-Semitic incidents over the last two years. (Nor was Bennett alone: David Bernstein, a conservative law professor, attacked the details of the ADL’s report over at Tablet. I looked for previous examples of a Tablet writer arguing there’s been no rise in anti-Semitism, or that accusations of anti-Semitism were overblown. I couldn’t find any.)

.@naftalibennett, at roundtable in New York, says he’s “not sure there’s a surge in anti-Semitism in the United States.” Questions recent @ADL_National report: “I’m not convinced those are the facts.” pic.twitter.com/eg50nG2ibT

Bennett seems to have walked back his claim. And yet his original statement, “I’m not convinced those are the facts,” left an indelible impression.

Now why would Bennett, a man who has built a career and a far-right platform on non-jewish hatred of Jews, all of a sudden grow so circumspect? Where would he learn such epistemic modesty, such an aversion to overblown accusations?

The answer is simple and ugly. The Israeli right has allied itself with right-wing leaders across the world: Victor Orban, the anti-Semitic leader prime minister Hungary; Jair Bolsonaro, the crypto-fascist incoming president of Brazil; and most obviously, Donald Trump and the Republican Party.

Trump has been very kind to Netanyahu and Bennett, giving them Jerusalem, slashing aid to Palestinians, and adopting their line on Iran. Importantly to Bennett, who runs a settler party, Trump has also eased all of Obama’s pressure on West Bank settlements.

And the association between Trump’s xenophobic rhetoric and an anti-Semitic rampage, six days before the midterm elections, is a disaster for Republicans.

Trump: “I wouldn’t be surprised” if Soros were funding migrant caravan https://t.co/JWjlJZppym pic.twitter.com/OSVS2AZD7B

Naftali Bennett, you see, is always worried about the rise of anti-Semitism — except when it is politically inconvenient.

To be clear, I do not know whether the ADL’s numbers are correct. There may well be room, speaking from a detached, intellectual vantage point, to question their narrative and their statistics.

But there has been that room for the last several decades over which Jewish institutions and the State of Israel have constantly talked about the rising threat of anti-Semitism. And not only has Naftali Bennett never raised those questions, but he has constantly argued for maximalist interpretations of anti-Semitism, argued that it is a growing, burning threat to the Jewish people across the world.

Well, if you didn’t know before, now you know: He was never speaking in good faith.

The current Israeli Minister of the Diaspora has never cared about the safety of the Jews of the Diaspora, except insofar as it provides a rhetorical cudgel with which to beat his political enemies.

Bennett does not worry about the Jews of Pittsburgh or of Budapest; he worries about the settlers of Hebron and Ariel, the occupiers of Palestinian land in the West Bank.

The right’s use of the fear of anti-Semitism, all along, has been a cynical game.

And while a small, petty voice within me is satisfied to see this hypocrisy unveiled, my schadenfreude is dwarfed by my sadness.

I feel sad for the Jewish people, watching their official representative sell out his kin to a foreign ruler. I feel sad for Israel, seeing how far its politics have degraded. But most of all, I feel sad for Diaspora Jews.

While anti-Semitism is a political game for right-wingers, it is for many of us, across Europe and now in the United States, a matter of life and death.