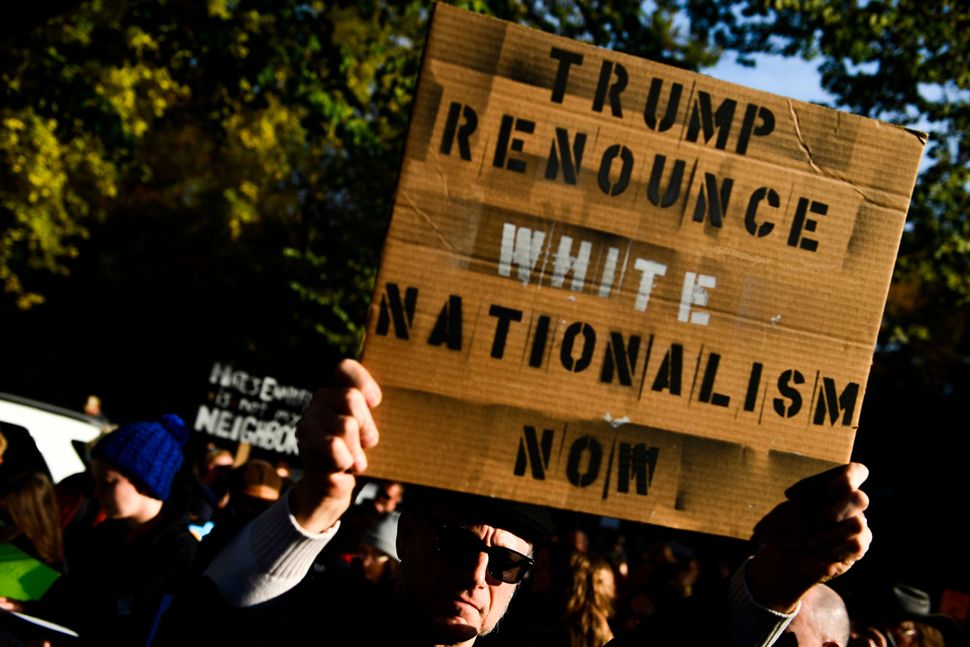 The mass murder of Jews at the Tree of Life synagogue in Pittsburgh came as a shock. However, for anyone paying attention, it did not come as a surprise.

And therein lies the problem. All too few have been paying attention to anti-Semitism.

Among those who have failed to pay heed are the media, universities, political leaders, and even Jews themselves, both rank-and-file as well as communal leaders.

It’s not just wrong that the term we use to describe bigotry excludes Jews. It’s dangerous. And yet, it’s also not surprising.

According to the Southern Poverty Law Center, in 2016, there were 917 hate groups active in the U.S. The SPLC categorizes hate groups by type, such as anti-immigrant, anti-LGBT and anti-Muslim. There is, however, no category for anti-Semitic groups.

When asked about this by a curious reporter, Mark Potok, a senior fellow at the SPLC explained, “The reason we don’t have a separate category for anti-Jewish groups is that the vast majority of [hate groups] are all anti-Semitic.”

Leading Jewish politicians in this country have utterly failed to speak as one and specifically denounce the scourge of anti-Semitism in America today. This despite the fact that anti-Semitism is on the rise globally. In the United States alone, anti-Semitic incidents increased by 35% in 2016 and 57 percent in 2017.

Ever since Donald Trump announced his candidacy, concerned Americans have rightly focused on protecting those groups he has specifically targeted. Among them are Muslims, African Americans, Hispanics, immigrants and the LGBTQ and transgender communities.

Jews were not one of the groups considered in need of protection or defending, although Trump was not above making disparaging remarks about them.

On Saturday in Pittsburgh, the intense sense of security American Jews enjoy was dealt a severe blow. The public is now more aware than ever before of the anti-Semitic strain in American culture.

It runs deep, because the myriad tropes, accusations, and narratives anti-Semites traffic in have been with us for centuries.

Those ideas are all alive and well today in America.

Take the so-called “caravan.” For the Tree of Life murderer, Robert Bowers, the real culprit was HIAS, the Hebrew Immigrant Aid Society. He accused them of bringing in “invaders” to undermine America.

Now, everyone has learned of a new anti-Semitic conspiracy theory.

But for a long time now, anti-Semitic websites have claimed that Jews are responsible for bringing Muslim terrorists into the United States so as to bring the country to its knees in order to take control of it.

This, of course, is ridiculous. But it has a pedigree well known to every pathological anti-Semite.

As Adolf Hitler put it in “Mein Kampf,” writing about the French troops who occupied the Rhineland after World War I and were made up of Congolese and Sengalese soldiers:

“It was and it is Jews who bring the Negroes into the Rhineland, always with the same secret thought and clear aim of ruining the hated white race… throwing it down from its cultural and political height, and himself rising to be its master.”

For anti-Semites, American Jews such as George Soros and groups like HIAS are trying to do the same thing to America. An alarming number of Republican politicians regurgitated the claim made by Florida Republican Matt Gaetz, that Soros was funding the Honduran refugees. FOX News beats the same drum.

But it doesn’t stop there. Chairman of the Senate Judiciary Committee Charles Grassley, a Republican from Iowa, said he “tended to believe” that George Soros paid those protesting against the appointment of Brett Kavanaugh to the Supreme Court.

And according to a tweet from the majority leader of the House, Kevin McCarthy, Soros, along with Michael Bloomberg and Tom Steyer, must not be allowed “to BUY this election.”

And even President Trump blamed Soros for the caravan — just days after 11 Jews were killed for this very conspiracy theory.

This is not new. Going back to the nineteenth century, anti-Semites the world over have thundered that their political opponents are owned by Jews and act as their puppets.

We’ve seen mainstream parties adopt a radical agenda before. Seeing its popularity slip in favor of more extreme political parties, in 1892, the German Conservative party, which was not especially anti-Semitic, adopted the Tivoli Program, an antisemitic agenda which sought to combat the “corrosive Jewish influence on our national life.”

Later, Nazi propaganda proclaimed that Churchill, Roosevelt, and Stalin were all controlled by Jews.

In the anti-Semitic worldview, the Jews are said to be behind anything and everything. Thus, Jews are accused of pushing the “gay agenda.” This, too, is old wine in new bottles. From 1871 to 1994, Paragraph 175 of the German criminal code made homosexuality a crime. One notable effort to repeal the law was led by, among others, one Magnus Hirschfeld, a gay, Jewish, medical doctor and one of the earliest physicians to study homosexuality.

For anti-Semites, Jews were behind the plot to destroy German morals by promoting homosexuality. As the Nazi Minister of the Interior, Wilhelm Frick said of the effort to repeal Article 175, “Naturally, it is the Jews, Magnus Hirschfeld and his racial comrades, who have taken the lead and are trying to break new ground, just as in general the whole Jewish morality has ruined the German people.”

In the past, derogatory expressions used to describe Jews included “rootless cosmopolitans” and “universalists.”

At his rallies, Donald Trump rails against “globalists.” This is a code word for Jews. He surely knows it and his most extreme supporters definitely know it.

The final television advertisement of Trump’s presidential campaign was replete with anti-Semitic code words for Jews.

While it elicited considerable media coverage, Republicans did not repudiate it, and leading Democrats failed to clearly denounce it.

One problem that contributes to ignoring anti-Semitism is the use of the term “white nationalism.” In the United States, with its terrible history of slavery, Jim Crow, and ongoing discrimination, it is totally understandable that this term is used. But if, when dealing with questions of race, white and black are considered opposites and Jews are considered white and thus in some way enjoy “white privilege,” then there is no room and in fact no need to discuss anti-Semitism.

However, race is a fluid and not a fixed concept. For anthropology, which first emerged as a discipline in the eighteenth century, Jews were a conundrum. Very few anthropologists considered them white. They were mostly seen, according to the language of the day, as “Asiatic” or as “white with negroidal features.”

Among most American Jews, as well as in liberal and progressive circles today, Jews are simply classified as white.

But neither the Nazis nor their ideological heirs in America today consider Jews white. At universities across the country in 2017, posters declared, “WHITE MAN are you sick and tired of THE JEWS destroying your country through mass immigration and degeneracy?”

To ignore the fact that Jews are not white to anti-Semites is to ignore anti-Semitism.

The prevailing political and cultural ethos at universities sees an entirely understandable focus on underrepresented minorities. But Jews, both on and off campus, serve as examples of minority group over-representation and this has been central to the claims of all modern anti-Semites. There was no country in Europe before the Holocaust where Jews were not accused of having “taken over” a nation’s culture by being overrepresented in this or that field of endeavor.

American anti-Semites make the same claims. Unfortunately, the current American lens through which bigotry is understood has difficulty bringing modern anti-Semitism into focus.

Different hate groups target different constituencies. But the glue that binds all of them together is anti-Semitism and their unshakeable belief in a world Jewish conspiracy.

There is a historic parallel for this too. In nineteenth century Germany, this exact same glue bonded many different right-wing clubs and associations to each other in what was called the Völkisch movement, a subculture that celebrated Aryan identity.

All of the examples here occurred in the public domain. It should not have taken eleven murdered Jews for the country to finally see that which has been hidden in plain sight.

John Efron is the Koret Professor of Jewish History at the University of California-Berkeley. He is a specialist in German-Jewish history. He is the author of German Jewry and the Allure of the Sephardic.