Mourning In Pittsburgh Is Jewish – And Political 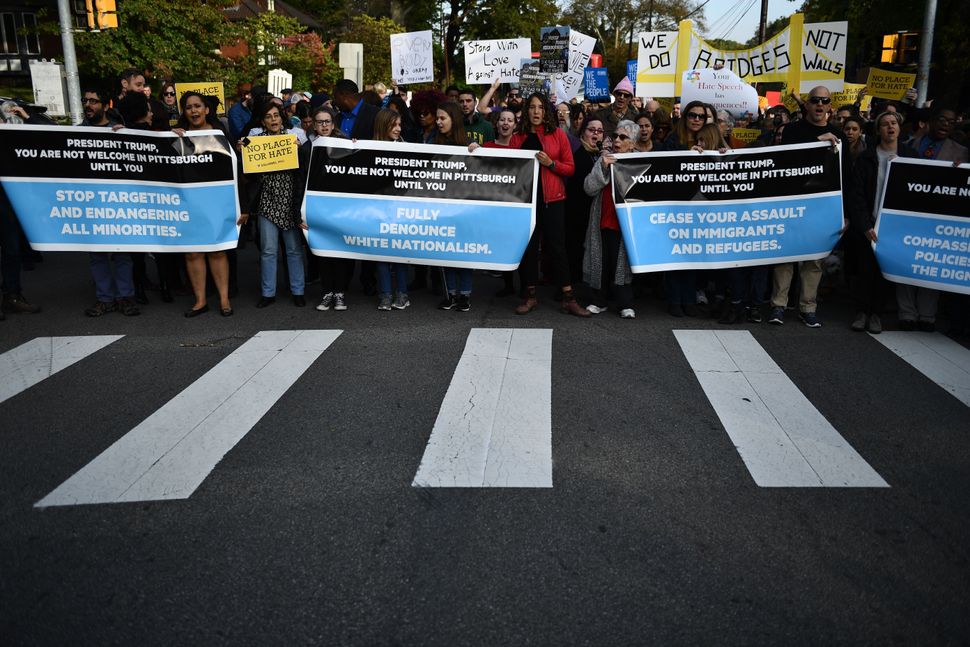 Before October 27th, if anyone told us that Pittsburgh’s Jewish community would be thrust into the national spotlight as the target of the deadliest attack on Jews in American history, we would not have believed it. For the past two years, under the banner of Bend the Arc: Pittsburgh, we had been organizing locally in the face of rising hate against vulnerable minorities. We never expected that violence would erupt in our own backyard.

With both the Jewish and activist connections, we found ourselves in the position to organize a deeply Jewish response, both political and mournful, on behalf of the community we love. Broken and grieving, we had just hours to provide the political context for the violence that had shattered our community. With a reach we had never contemplated, we told the world that Trump was not welcome in our city until he denounced the white nationalism that emboldens vicious anti-Semites.

This was not any scenario we envisioned when Bend the Arc: Pittsburgh first started during conversations over kiddush at shul.

In the wake of the 2016 election, we talked over plates of hummus and crackers, incensed by Trump’s hateful rhetoric. We felt this outrage not only as moral citizens, but also specifically as Jews, whose parents and grandparents had experienced persecution and suffered as refugees. We knew we could have joined any of the grass-roots resistance collectives that were popping up across the country at that time, but we also understood that those groups only captured some of what motivated us. For us, this dangerous political moment demanded that we respond as Jews.

Few of us could claim professional organizing experience. For the most part, our resumes boast skills common within our professional, middle-class neighborhood: we are software engineers, lawyers, consultants, social workers, non-profit directors, and college professors. But, we had long been immersed in Jewish networks and recognized this as a valuable political resource. Through the synagogues where we prayed, our children’s schools, and local Jewish community institutions and events, we slowly built our network.

We were also deeply invested in the social, intellectual, religious, and cultural life of our Jewish community. Through a shared foundation of Jewish ritual, text, and historical memory, we demonstrated against the Muslim Ban and in support of Dreamers, immigrants, and refugees. Our political activity did not replace our Jewishness; it was one of the deepest expressions of our Jewishness.

It was no different on the day President Trump arrived in our city. We started our day as Jews, davening in the park with our Pittsburgh Jewish community. Together we drew ballast for a day of funerals and of protest, for the week of shiva, and for our future in a gutted, traumatized Jewish community.

Our march began that afternoon, after the funerals, out of respect for the mourners and the dead. We put together the only kind of protest that made sense to us: prayerful, defiant, and immersed in Jewish ritual. Thousands of resolute marchers, from all backgrounds, joined us in Hebrew songs about building the world with love, about drawing strength from the music of God. Together, we engaged in the mourning ritual of kriah, and the rip of our black ribbons tore through the streets of Mr. Rogers’ neighborhood. We held signs promising to love and protect all of our neighbors and not to tolerate words of hate, even if – especially if – those words come from the mouths of our elected leaders.

We only got through that day (and every day since) because of the processes and relationships we built, quietly but resolutely, over two years of local organizing.

Moreover, we drew on a model of shared, rotating leadership that had long kept us afloat. We respect that people on our steering committee cycle in and out depending on their commitments and energy. This is what happened in a highly concentrated way in the days after the shootings. Even as we planned our response and managed the unbearable media scrutiny, people on our steering committee had to take time out to attend funerals and shivas, to focus on their children, to prioritize their mental health, to break down and weep. We gave one another that space, trusting that collectively we would keep moving forward.

We are serious about our message, but we also know that we couldn’t have gotten through these past two years – not to speak of the past few days – without some healing laughter. We bring a giant bottle of bourbon to every meeting and consider it a mascot and comfort object. We hold dramatic readings of the less polished quotes we’ve given to the press. We contemplated organizing our whole protest around the prayer, “May God bless President Trump and keep him….far away from us.” We understand our laughter as a deeply Jewish response to tragedy.

In the end, though, our tears far outweighed our laughter these past excruciating days. We are grateful that the world finally seemed to listen to us, for at least a brief moment, when we connected the dots between Donald Trump’s white nationalist rhetoric and the deadly anti-Semitic violence that gutted our community. But we also know that this would not have happened if eleven of our beloved community members hadn’t been killed. Whatever impact we have made, this is the sickening reason why. May their memories be for a blessing.

Bend the Arc: Pittsburgh is part of the Bend the Arc Jewish Action network.

Mourning In Pittsburgh Is Jewish – And Political