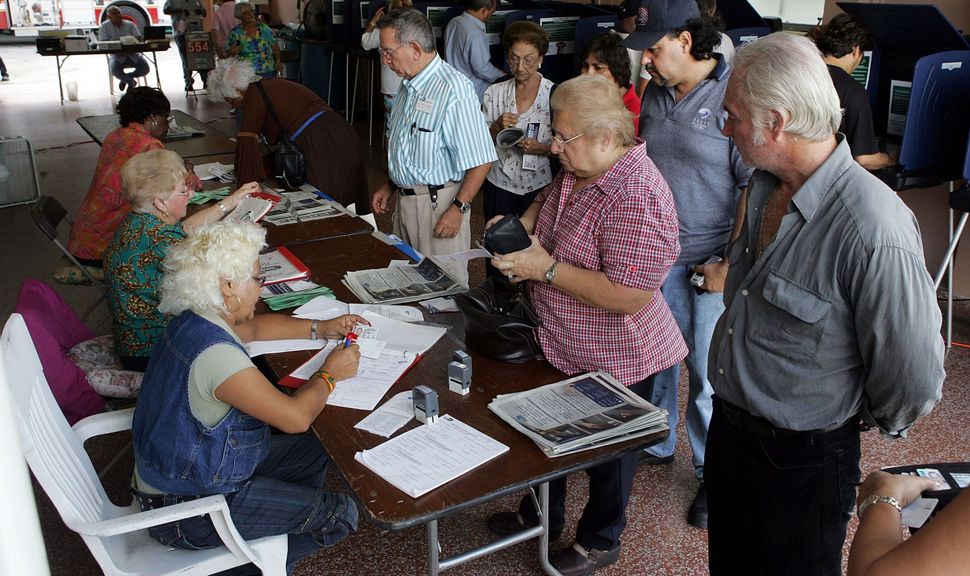 For such a tiny group, we Jews sure manage to cause a ruckus.

According to the Pew Research Center, Jewish adults make up a mere 2.2% of the U.S. population.

And yet, as we head into another presidential cycle, there is already talk about the importance of the Jewish vote.

Let’s step back and tackle the most basic question: Is there even such a thing as the Jewish vote?

The answer is yes and no.

The vast majority of Jews are liberal Democrats, where they are safely ensconced for the foreseeable future. The reason for this phenomenon is outside the scope of this article, but suffice it to say that Milton Himmelfarb’s decades-old musing that “Jews earn like Episcopalians and vote like Puerto Ricans” is just as relevant today.

To the extent that there is a Jewish vote up for grabs, it is to be found in very specific geographic locations and will only matter on the margins in very close races. The large Jewish population centers in New York, for example, will not be electorally relevant in 2020 – except at the very local level perhaps.

For political purposes, it is more useful to talk about the “persuadable Jewish vote” – an even smaller group of voters. Having worked in swing states, I’d argue that this electoral bucket should also include Jewish-like voters, i.e. people who care about issues that persuadable Jews care about. On campaigns, we often talk about these voters as pro-Israel/anti-Iran/security voters. They are often educated, suburban people who vote based on candidates and issues – not party allegiance.

In the 2016 U.S. Senate race, for example, Sen. Pat Toomey’s campaign, a race for which I consulted, used a targeted digital strategy to reach security voters who were concerned about President Obama’s Iran deal, America’s relationship with Israel, and similar issues. We knew that our path to victory lay with ticket-splitters — suburban voters who were firmly in the Never Trump camp, but would consider Sen. Toomey.

Similarly, in 2020, the “persuadable Jewish vote” will matter in small pockets of swing states like Pennsylvania, Ohio, Florida, and several other congressional districts. At the presidential level, they will matter only in the closest of results, but are worth targeting because the large number of electoral votes in one of these states could swing the entire election, and because modern political tools make it so easy and efficient to reach these voters.

At the congressional and even state legislative levels, these voters will become more important, not only because their proportional size grows, but because of the looming redistricting battle in 2021-2022. Control of the state legislature in populous states like Ohio and Pennsylvania will determine congressional maps — and congressional control — for the next decade.

As we saw in the 2018 cycle, Republicans will have trouble winning in suburban areas in 2020, with Trump casting a shadow over races large and small. In Senate and congressional races, Republican candidates will have to find issues that will appeal to and persuade ticket-splitters. In some key races, the “persuadable Jewish/security voter” bucket will be important.

Polling and data will offer insight into what issues most concern these voters, but increased anti-Israel and anti-Semitic rhetoric and newly elected politicians on the left may prove useful in Republican messaging to persuadable Jewish and security voters.

While the worst offenders represent districts that have little to no Jews, their hateful rhetoric can be used to taint Democrats across the country.

Of course, two years in politics is a lifetime. So much will depend on the eventual Democratic nominee and candidate recruitment in key states and districts — not to mention global events that are outside our control.

But with so much at stake, you can expect both sides to pursue the persuadable Jewish vote with a tenacity that belies our tiny population percentage.