We’re Now Locking Our Synagogue’s Doors. It’s Not Because of Linda Sarsour. 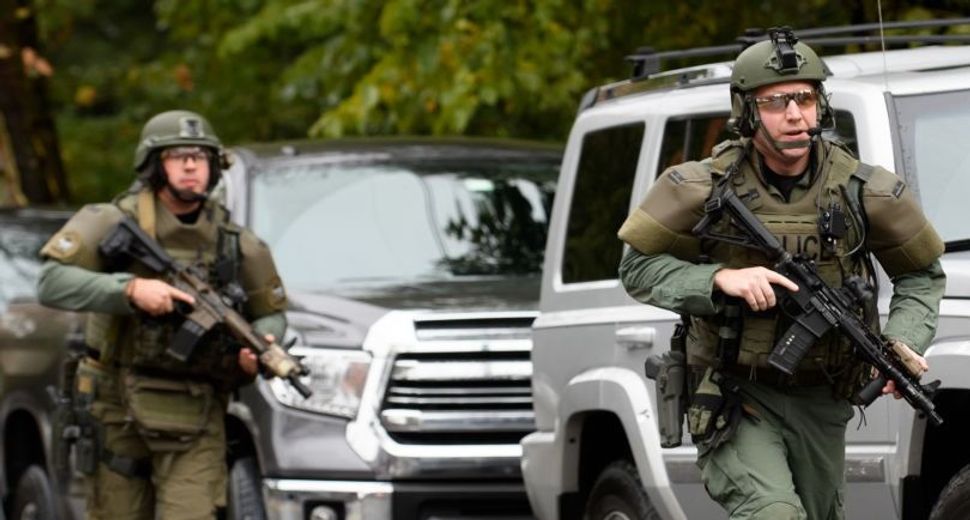 It’s a decision I prayed we would never make. We’ve talked about for months. But, at this point, even I won’t argue with it.

From now on, our shul will keep its doors locked at all times. Even during davvening.

But I’m not angry with my board. They have an obligation to protect our community. They are worried about our safety. They are scared.

And rightly so. They read the news. They see what is happening in their country.

They know that last month, in Kentucky, an armed white supremacist named Gregory Bush tried to enter First Baptist Church of Jeffersontown, a predominantly African-American church, during a midweek service — but found the door locked.

He went to a supermarket instead, and killed two black grandparents.

And, of course, they know about the Tree of Life synagogue in Pittsburgh. They know that, on Shabbos morning, 11 Jews were slaughtered while davvening — also by a white supremacist.

So you might imagine that, as synagogues all over the country make agonizing decisions about how to protect ourselves, about how to balance our timeless values with the need to feel safe and be safe, we would also be talking about the murderous scourge of white supremacy.

But scanning the headlines of Jewish periodicals like this one, that’s not the conversation you find. In fact, if you didn’t know about the Tree of Life massacre, you might think that the greatest existential threat to the Jewish people was something called the Women’s March. And that it was the leaders of the Women’s March who had killed 11 Jews in prayer.

That is, of course, not the case. My board just made the decision to lock the doors of our shul during davvening times – and, in fact, at all times. But they didn’t do it because of Linda Sarsour. Or because of Tamika Mallory. Or even because of Louis Farrakhan, his obvious sexism, homophobia, and grotesque and venomous Jew-hatred notwithstanding.

They voted to lock our doors because of Pittsburgh. They did it because an armed white supremacist shouted, “All Jews must die!” — and shot up a shul.

Robert Bowers, the Tree of Life murderer, is not a Muslim. He hates Muslims. His social media profile did not quote a surah from the Quran.

It quoted the Book of John. From the Christian bible.

This text is used by something called Identity Christians to argue that people of color are “mud people,” Jews are “imposters,” and that white Europeans are the “true chosen people.”

Violent extremists exist in all religious traditions, including Islam and, for that matter, Judaism. But in the United States, the majority of religious extremists who have hunted Jews have been Christian.

The shooter at Tree of Life synagogue quoted the book of John. The shooter at the Greater Kansas City JCC in 2014 wrote a newsletter, quoting the same text. “Let the blood of our enemies flood the streets, rivers, and fields of the nation, in Holy vengeance and justice,” he declared to his followers. “The Jews are our main and most formidable enemies, brothers and sisters. They are truly the children of Satan, as Christ tells us in St. John 8:44.”

And the shooter at the Los Angeles JCC in 1999 was also an adherent of Identity Christianity, telling the FBI in his confession that he wanted his shooting to be “a wakeup call to America to kill Jews.”

All white. And all Christian.

Our synagogue membership includes many wonderful interfaith families with Christian spouses and parents. I am proud to partner with numerous Christian pastors from a diverse array of denominations. I have taught in their buildings and they have taught in ours.

But it is the anti-Semitism of Christian white supremacy that has consumed Jewish blood in this country. So no, I am not angry with my board for deciding our doors need to be locked. But I am angry that, after a Christian white supremacist committed the bloodiest attack on Jews in American history, we’re fighting about Muslims. I am angry that we are talking about the Women’s March, and refusing to talk about the men whose hate of Jews has put them behind the barrel of a gun.

And I am disappointed that American Jewish leaders are seemingly unwilling to face the truth of the actual danger of extremism in the white Christian world, choosing instead to focus their ire on women of color.

As the rabbi of a shul that now locks its doors, I can tell you that it doesn’t make me feel any safer.

We’re Now Locking Our Synagogue’s Doors. It’s Not Because of Linda Sarsour.