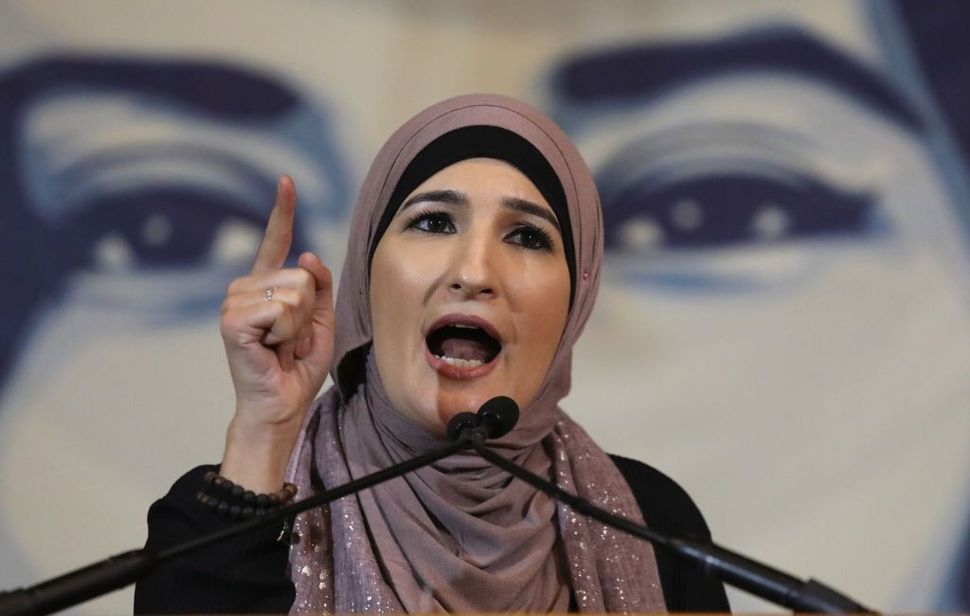 Linda Sarsour speaks during a National Day of Action for a Dream Act Now protest on February 7, 2018 in Washington D.C. (Photo by John Moore/Getty Images) Image by Getty Images

It’s undeniable that the Women’s March has made mistakes that are unbecoming of global leaders. Tamika Mallory’s support of Louis Farrakhan is distasteful in its tenacity and its ingratiating nature.

Her calling him “The Greatest of All Time,” and responding to her critics by saying she had “the same enemies of Jesus,” has been incredibly angering to witness.

Although I understand and respect the important role that Farrakhan and the Nation of Islam played in Mallory’s life, her support of him is lacking nuance and it is absolutely unfit for someone who claims to fight for all women in a global movement. Full stop.

Meanwhile, Linda Sarsour has an incredibly hard time removing her bias against white Jewish Zionists from her activism, which has proven extremely alienating for many Jewish women. The fact that many Jewish women don’t feel welcome in the Women’s March because they fear anti-Semitism is something that all the leaders should reflect on.

However, in the past few days, the criticism of the Women’s March has become a frenzy of socially justified Islamophobia and anti-blackness.

It reminds me of the fallout from my first article in which I denounced Farrakhan. The way it was used to justify racism made me want to say “Oh shit…what did I do?”

It’s not wrong to criticize Sarsour and Mallory, but this is getting insane.

Sarsour has been on the receiving end of infuriated criticism regarding her stances on Israel and Palestine, with people insisting that her opinions on the issue make her anti-Semitic.

That’s simply ludicrous. Expecting a Muslim Palestinian woman to remove all her anger about the Israeli occupation and to hold no bias against white Jewish Zionists is asking her to have more love for Israel than most Diaspora Jews, many of whom also frequently say things like “Zionism is creepy.”

Couple this with the fact that Sarsour isn’t just some young social justice warrior ignorantly spewing anti-Semitic rhetoric because she doesn’t care enough to reflect on her own behavior. She’s not like the United Nations, who put a disproportionate amount of sanctions on Israel, ignoring the human rights abuses of other nations. She’s not like Jeremy Corbyn or anti-Semites in France, who use the Palestinian plight to justify whatever insane anti-Semitic thing they want to do or say.

It is absolutely ridiculous to expect Sarsour to put aside her family’s history and her own feelings to make her oppressors — or those who defend them — comfortable. It’s ridiculous to ask her to fight for the existence of a country that she thinks was stolen from her people, a country where her ancestors are buried but where she doesn’t have a right to return.

Yes, Jewish people have a right to self-determination, and people lose wars all the time without facing the incessant criticism that Israel has. I get it. But expecting the people who have been harmed by Israel to fight for it is unrealistic and deeply unfair.

Sarsour has taken a lot of heat for saying that Zionism is incompatible with feminism. But most forms of Zionism actually don’t include or protect Palestinian women, so in truth, Zionism doesn’t include women like Linda Sarsour.

Ironically, this is similar to how Jewish women feel that Sarsour’s brand of feminism doesn’t include them.

This is why I’m not writing a defense of Sarsour: because alienating Jewish women is no way to lead a global movement. Though I understand the source of her anger, many of her statements are not the way that one leads a global, feminist and peaceful movement.

It’s understandable to see her as unfit to be a global leader.

And yet, this criticism must be conveyed in a certain way — a way that too many have failed at, veering into racism all too quickly, like when Courtney Love Cobain tweeted that Sarsour is “a vile disgrace to women and to all mankind,” or an “anti-Semitic terrorist.” Instead of calling Cobain out for clearly racialized and untrue attacks on Sarsour, many in my social circle praised this behavior, calling her a “queen” for being a racist.

Sarsour is correct when, in her open letter, she angrily said that she was being targeted by racists.

People are usually gleeful when women of color make mistakes, because it means they can drag them through the mud and not be labeled a racist for it.

This is a happy time for a lot of white women.

It’s ironic because there was a time when women of color were unhappy with the Women’s March. From the beginning, black and trans women screamed at the top of their lungs about the exclusionary nature of the movement.

No famous people spoke out about it.

In fact, black and trans women were often attacked for “dividing the movement.”

It took a group that America perceives as a white group — Jewish women — to speak up about the Women’s March for anything to be done.

No one is saying that Jewish women can’t speak up about these things, but it’s disingenuous to refuse to consider the way that the power dynamics in this situation affect black people.

I don’t support the Women’s March. I haven’t for a very long time. But I don’t think that it’s productive or healthy to join a chorus of white voices who are unnecessarily hateful towards these women in order to express the fact that I don’t support the march.

I can assure you that dogpiling on two women of color isn’t intersectional.

If Sarsour and Mallory aren’t the leaders that the movement needs, perhaps our energies would be better spent on finding new ones, instead of perpetuating harmful social norms about how women of color can be treated?

Both Mallory and Sarsour are being held accountable for their actions. Many of their critics need to now face responsibility for theirs.